Twitter Ads is the only paid social platform that actually makes me want to use it more. Bear with me, but after trying out all the main social media platforms’ advertising options, I find myself saying something I never thought I would: Twitter Ads are pretty great. More than that – I think all small businesses should start advertising on Twitter as standard.

In contrast to other social networks’ paid options (which do nothing but show their weaknesses) Twitter Ads, is pure Twitter. Whereas Facebook, for example, bought a display advertising platform (Atlas) and repurposed it (so that it now functions like a poor-mans display ad platform), Twitter Ads gives you exactly what you think you should get from advertising on Twitter. Namely using Tweets as ads in a variety of ways.

Getting what you want can be a curse or a blessing but in this case, it’s definitely a blessing. More than that the targeting options all make complete sense – you can target hashtags, topics, (lookalikes of) accounts followers, demographics etc. And the weirdest thing yet – it’s actually good value for money.

I honestly expected none of this from Twitter Ads. Considering how slap-dash Twitter Analytics is, my expectations were rock-bottom (and to be fair, the graph in Twitter Ads is pretty rubbish)! But then here I am telling you right now – try Twitter advertising. Go on, do it! 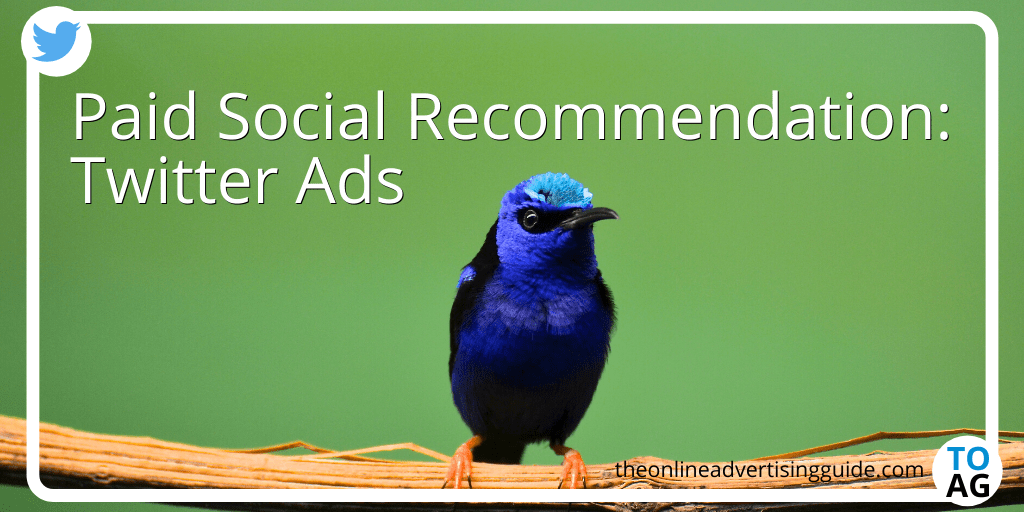 [Please note: I am not being paid to endorse this product, I just like it]

I can’t say this enough, my favourite thing about Twitter Ads is its simplicity. You either promote a Tweet, or you promote your account or promote a Trending topic – and that’s it. All of these things appear on Twitter anyway, so ads on Twitter are about as natural as they come. Advertising on Twitter is about paying to get ahead of the algorithm. 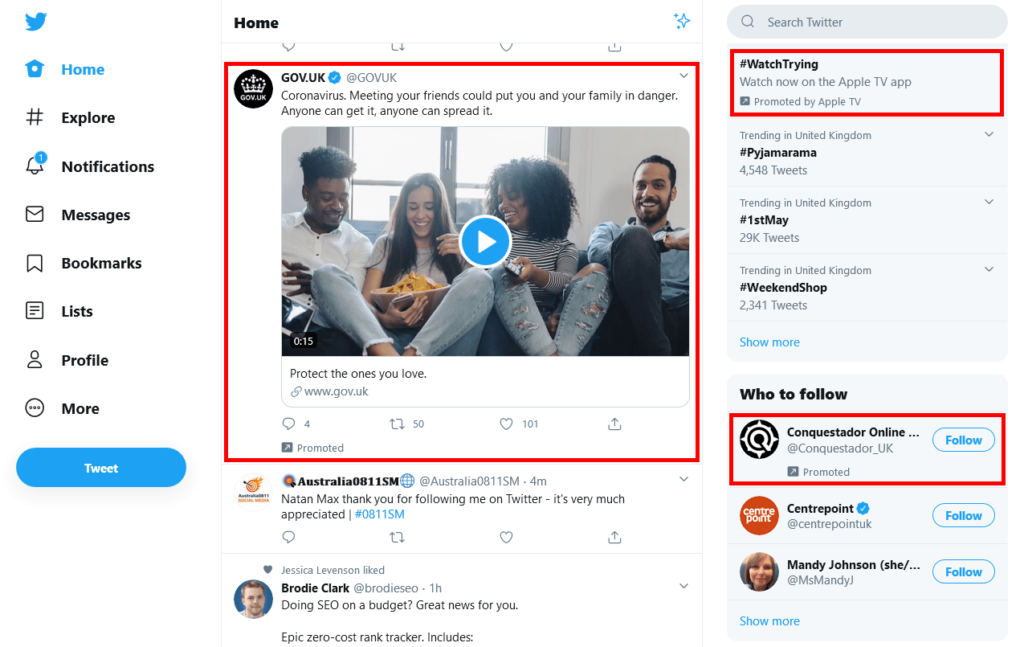 This might seem like an annoying concept, as it’s the equivalent of “Pay to Win” on Freemium Games, but it honestly makes a ton of sense if you think about it. Twitter needs to make money somehow, and this way, they are charging for something that has value without changing the core experience. People can still use (and succeed at) the service for free, but businesses that want to pay can cut the line.

If you’re not a social media marketer then you’re probably grumbling to yourself right now. Stupid businesses… and fair enough really. If you are a small business however this is excellent news. It saves you time and lets you magnify your work in a simple and satisfying way. It also means your Twitter account can now compete with every other type of digital marketing in a real way.

If you’re jealous of the followers another account has – target them and advertise to them. If you want your tweet to get more engagements, that’s no problem. If you want people to click through to your site – great, do it. If you need more video views, more followers, app installs, or conversions – then you can get those easy (you do need to add a Twitter pixel to your site for conversions though of course). 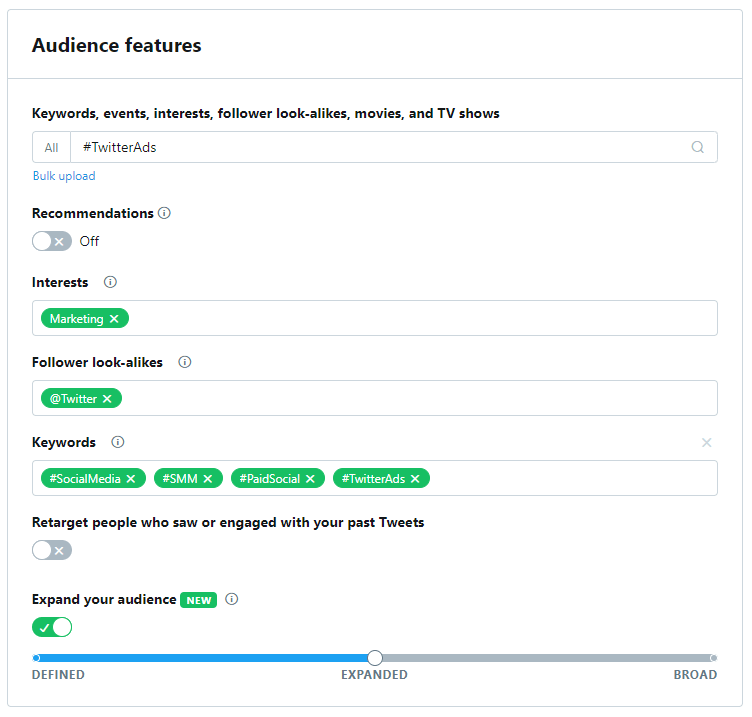 If you designed a Twitter Ad platform yourself – this is probably what you would come up with, and that makes it super intuitive to use.

Another reason why this is so pleasing is that when you send a Tweet out into the wild you don’t exactly know why people are engaging with it. Was it the hashtag? Did the right person share it? Who knows! With Twitter Ads, you can target different hashtags or followers of specific accounts and see if they like it. If they do – then you know which hashtags to focus on from now on (or which account to be more like).

Twitter Ads let you test and refine your audience regardless of the number of followers that you have. This makes using Twitter Ads into an optimising tool as well as an ad platform, which is crazy useful.

This, of course, will depend on how you run your campaigns but Twitter Ads are really good value for money in my experience. If you just want engagements (or votes on a poll) you can easily find them for about 2 pennies each. If you have a top of funnel message you want to get traction – this is exceptionally good value.

Followers seem to cost between 5 pennies and 50 pennies each depending on your targeting. While a single Twitter follower doesn’t really have much intrinsic value, if you spend £1 a day on getting followers, then over a year you can get somewhere between 700-1800 (legit) followers. Even with the smallest marketing budget possible, this makes a lot sense for any small business to try (you should do this on Facebook too btw).

In terms of conversions or link clicks, the results I have seen are way too variable to put a useful average here. Like any online advertising – the key is to benchmark against yourself and to optimise. I can say that unoptimised the results aren’t great, so to get tangible off-Twitter results you will have to work at it a bit.

The graph to explain your Twitter Ads activity is pretty rubbish, and the automatic date ranges you can choose are quite a lot less than helpful. It’s also pretty annoying to work out how to target conversions (you choose Maximise Traffic as your goal, then website conversions – once you have installed your Twitter Pixel).

Worse still is trying to add a new Ad Set to an existing campaign. In the least intuitive bit of design I have ever seen, you have to choose the “Edit Campaign” drop-down from the Campaigns screen, then go to the final step (Campaign Review) and click on 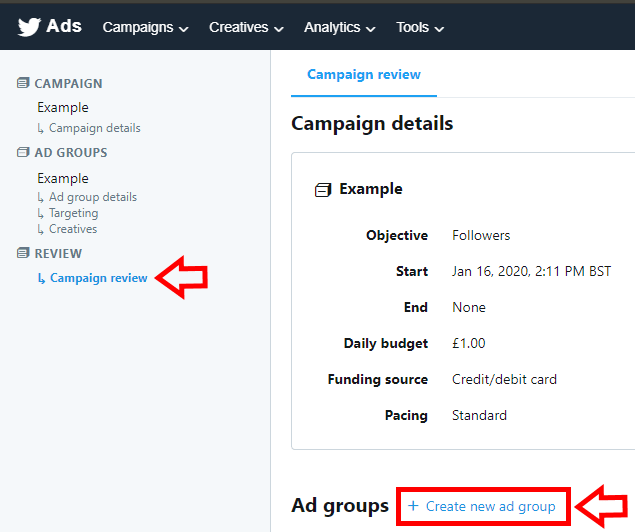 The more I use Twitter Ads, the more pleased I am with it. I am literally advertising more on Twitter because it’s such a pleasant and easy experience – and I really think you should too. At the very least try spending one pound/dollar/etc a day on followers for a few months. I would be shocked if you weren’t as pleasantly surprised as I was.