Welcome to Online Advertising Answers! Let’s dive into three of the most interesting questions I’ve been asked on Quora.

This month I examine how charities can get more money directly from Google than they would earn from ads, why calculating Facebook engagement rate is so hard, and if CPM is earned by websites (it’s not).

To ask your own digital marketing questions, just go to our editor’s profile on Quora and ask away! 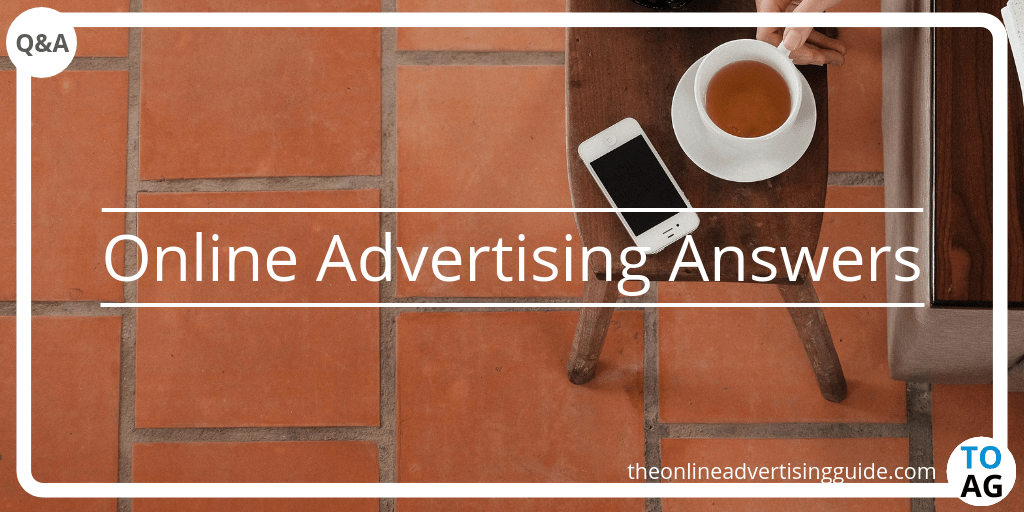 Q: “Can a charity website be used to run ads?“

Yes, a charity website can be used to run ads, but it might not always be the best idea.

Most charities are eligible for a Google Ad Grant, which is where Google gives charities $10,000 per month which they can use for Google Ads (previously called Google AdWords). This grant comes with stipulations however, one of which is that you can only run ads relevant to your charities mission, and have no AdSense or affiliate ads on your site at all.

Considering you would expect to earn around $10 per 1,000 page views on your website from AdSense, you would need to have a website which gets around 1,000,000 page views per month minimum in order to earn more from advertising than you get from the Google Ad Grant. Very few charities get this much web traffic.

On top of this, you can (and should) use your ad grant to advertise appeals, and to get donations which means you can turn the free money from Google into real funds for your charity. This is as well as the fundraisers, volunteers, campaigners, and even potential end-users of your charity that the ad grant can pay to help you find.

The bottom line is that creating a $10,000 per month marketing budget for a charity is a big deal. So if you are eligible for a Google Ad Grant, I would highly recommend going for that instead of putting ads on your site.

Note: There are a fair few conditions you need to hit to keep your Ad Grant, so below is a helpful infographic outlining them. 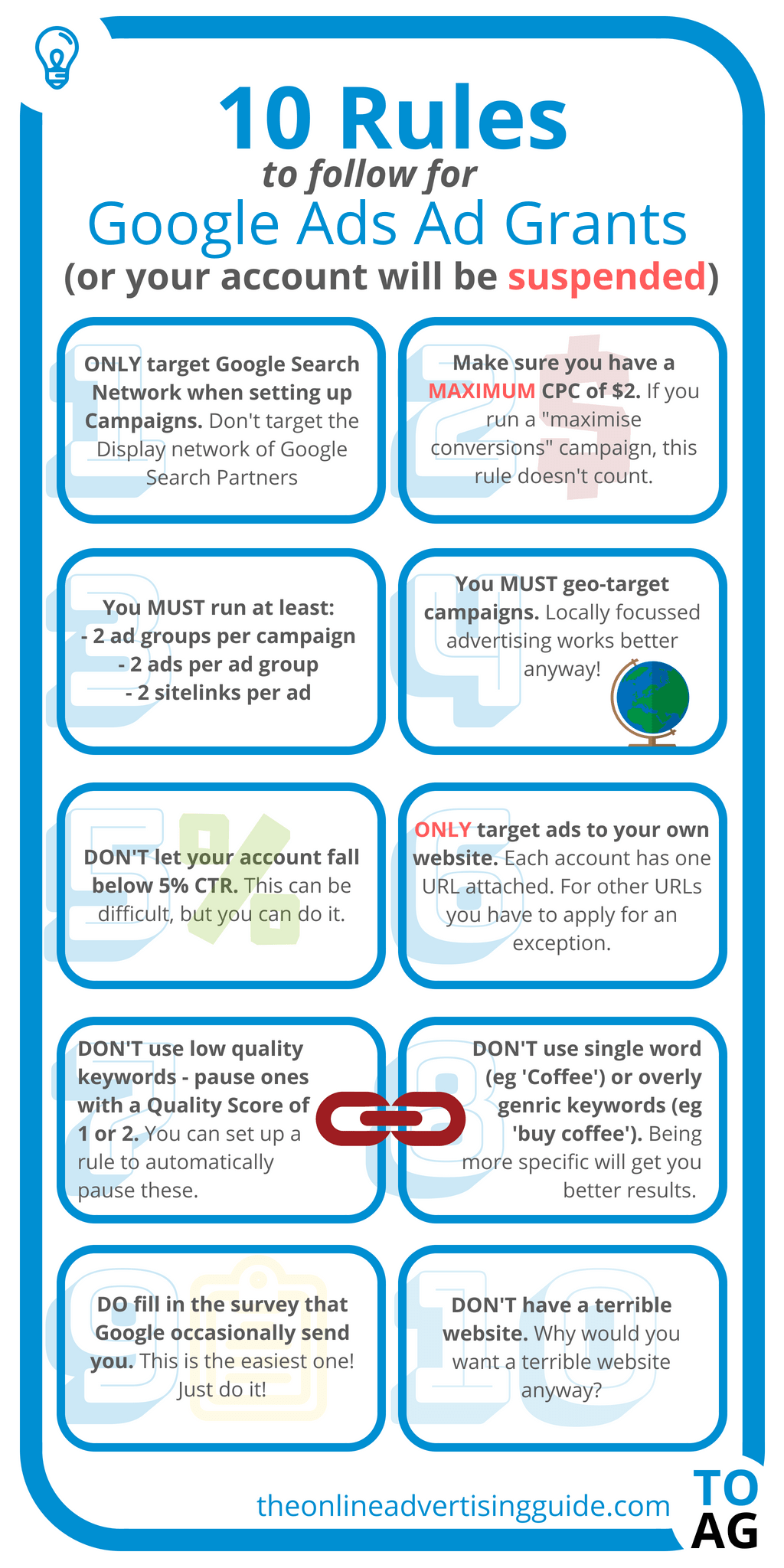 I hope this helps,
Justin“

Q: “How do you calculate the engagement rate of your Facebook posts?“

A: “This can indeed be super frustrating, as people do answer this question in so many ways (as the other answers you’ve received show), and that is actually Facebook’s fault.

This is because the Engagement Rate on Facebook for a post is calculated as the number of Engaged Users (not engagements) divided by the total reach of that post. Multiply the whole thing by 100 to turn it into a percentage.

Engagements on Facebook include reactions, shares, comments, and some clicks on links, videos and images.

Engaged Users on Facebook only counts one engagement per user. So if one person comments 10 times, clicks a link and reacts, that is 12 engagements, but only 1 Engaged User.

Total Reach means the total number of people who had that post come up in their feed.

Where do I find my Engaged Users?

To find your engaged users, you can do the following: 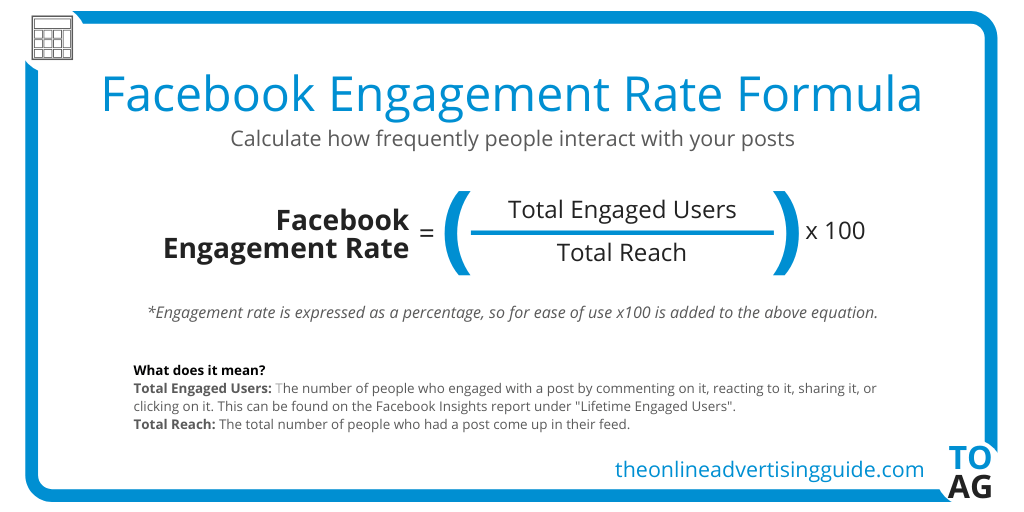 I hope this helps.”

CPM stands for Cost Per Thousand and is the amount paid by an advertiser for 1,000 impressions. It’s not actually the amount earned by a website owner however, as a lot happens between an advertiser booking an ad campaign, and a website running an ad.

The equivalent of CPM for website owners is called RPM (Revenue Per Thousand) and it is calculated as the amount websites earn per 1,000 impressions.

Note: CPM is often casually used to refer to RPM for reasons I’ll get into below. 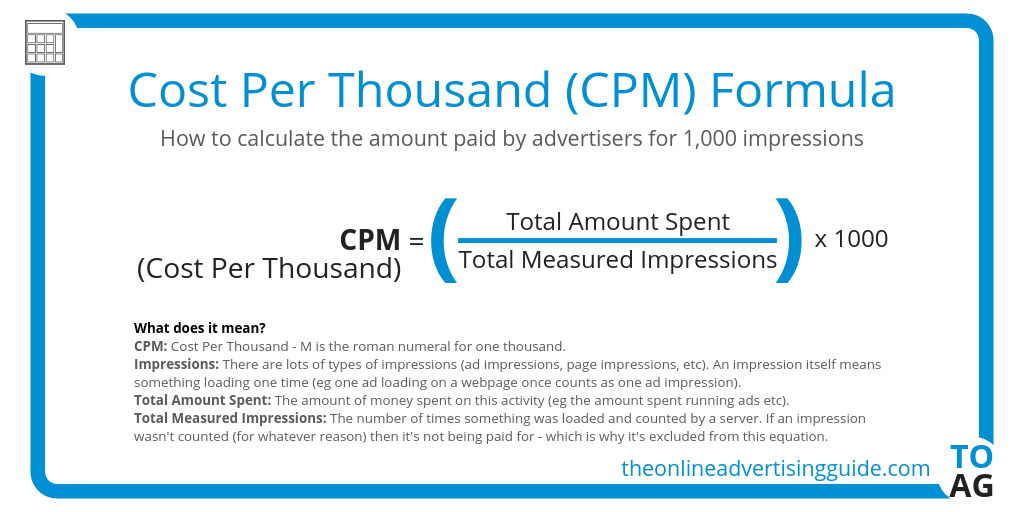 You can use this exact same formula to work out your RPM (just changing Spent to Received) which is why the term CPM is used in place of RPM most of the time.

[If you want to calculate your CPM, use this free calculator] 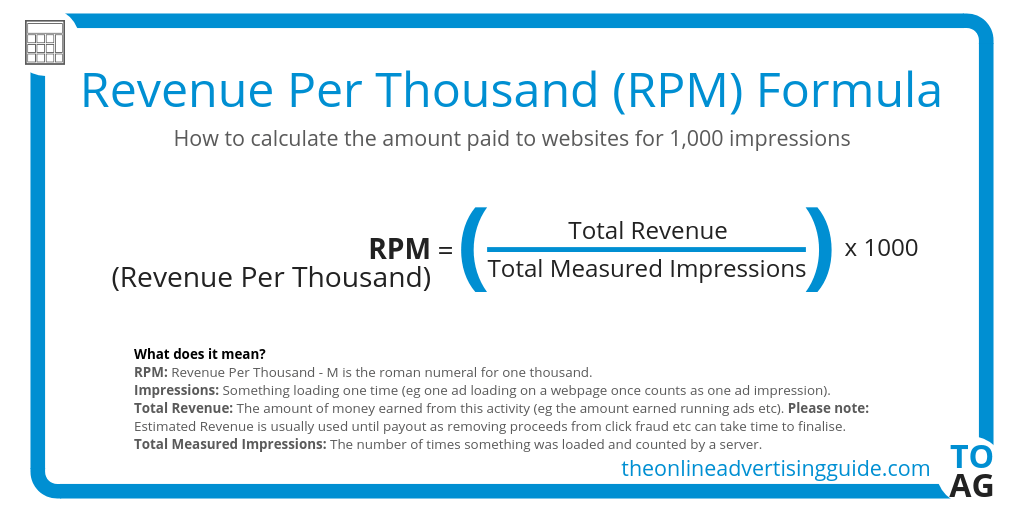 As you can see, it is essentially the exact same formula as used to work out CPM (just changing cost into revenue). Again, this is why the term CPM is used in place of RPM most of the time.

[If you want to calculate your RPM, then here is a free calculator for that instead]

A Quick Word About Impressions

Just to quickly clarify, CPM and RPM stand for cost per thousand (M is the Roman numeral for one thousand), but neither specify 1,000 *what*. This is because the implication is that they are talking about 1,000 impressions, and there are lots of different types of impressions.

The Difference Between CPM and RPM

On top of that, there are several technical issues which other companies need to be brought in to solve – such as tracking and hosting the ads.

All of these other parties need to get paid, which is why the process looks something like this: 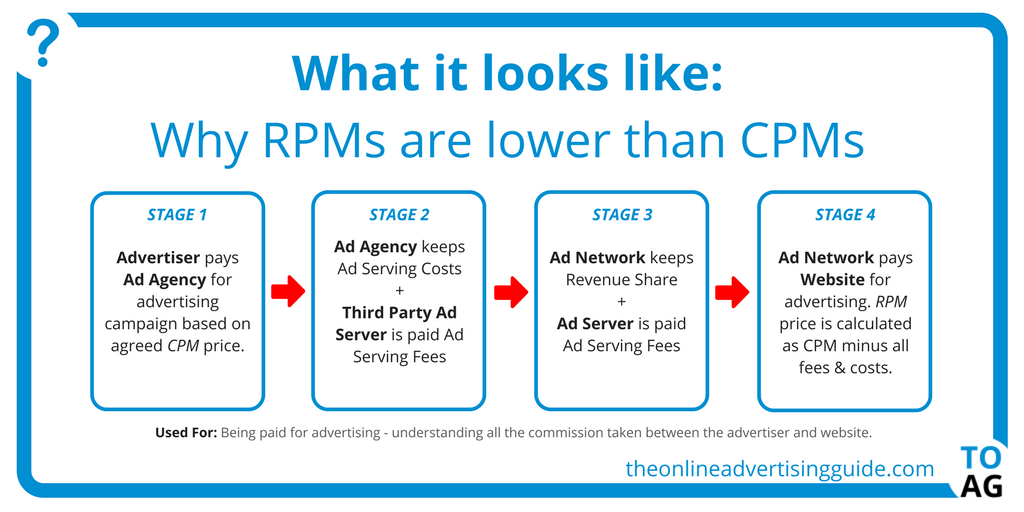 It should be noted that while the ad agency may also design the ads or do other work around an ad campaign. However, the money spent on this work is not part of the original CPM price – the CPM only covers the cost of actually running the ads.

Who Gets The Most Money From Online Advertising?

There is no standard answer to this but probably for an individual campaign, it’s the Ad Network who makes the most. The split in revenue goes something like:

I hope this helps,
Justin“

I hope this all helps,