Welcome to the February edition of Online Advertising Answers, my monthly rummage in my digital mailbag for your most interesting questions.

This month I’m answering some questions that could have been asked any time in the past 10 years. Which is better the ad size – the LREC or the MREC? What does CPA even mean? And what is my opinion on the effects of advertising?

Sometimes I just like to keep things simple. I hope you find my answers helpful…

[Want to ask a question? Head on over to my profile on Quora and ask away.] 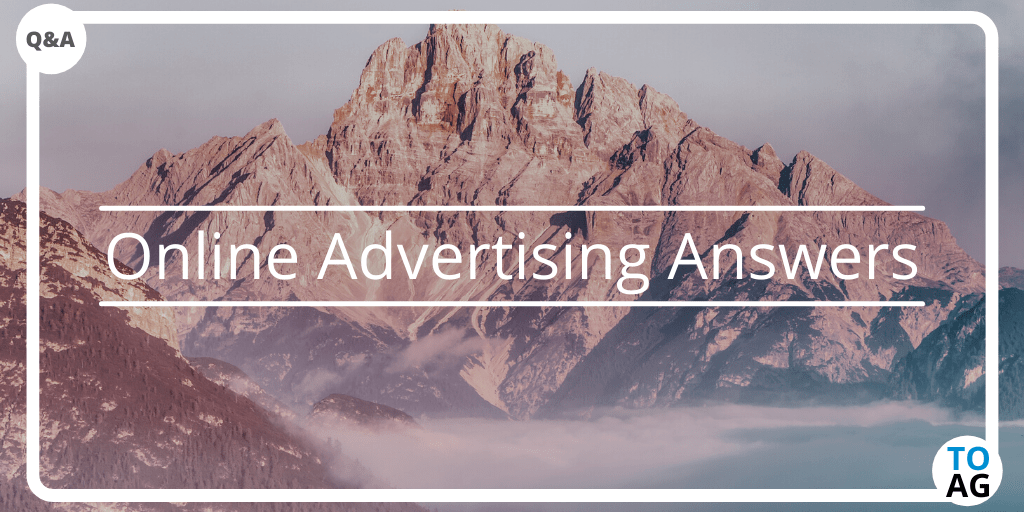 A 300×250 will definitely perform better – it’s the best-performing display ad size out there!

However, if you have space I would actually recommend adding a 336×280 ad unit to your site instead. This is only because if AdSense can’t find a good 336×280 then it will serve a 300×250 instead. So by adding the larger ad size to your site, you’ll actually be getting the best of both worlds.
Of course, you should only do this if it looks good with the design of your site.

I hope this helps.
Justin”

Q: “What is your position and opinion on the effects of advertising?”

But it doesn’t have to be this way. At it’s best advertising informs and funds. While I have no respect for things like product placement, non-invasive ads on websites help keep the internet free to use.

Note I specifically said “non-invasive ads”. Ads which get in the way of what you are trying to do are more effective, but also MUCH more annoying.

Unfortunately, we are currently stuck in a cycle where:

So, unfortunately, we are slowly but surely seeing worse and worse ads turn up everywhere (mid-roll ads on Facebook for example). Lot’s of people have (rightly) entirely turned against advertising because of this cycle. It’s not a new cycle either – this race to the bottom has been occurring ever since advertising first started.

However, it’s not all bad news. Advertising is annoying yes, but it also pays for so many things which would otherwise not be free to use. The millions of websites out there giving entertainment, information, tools, and games away for free are only able to exist because of advertising.

It used to be that if you wanted to start a business, the start-up costs would mean that most people need a rich relative or a loan from the bank. Nowadays online advertising is so cheap and effective that almost anyone can start a business small and grow it fast by advertising for not much.

This is not to say that advertising on websites doesn’t still have a ridiculous amount of problems, or that having a big bank balance isn’t a huge advantage when starting a business.

So to answer your question, I think advertising makes the internet more annoying but also more accessible. We can do things to reduce the annoying, but we desperately need to keep the accessible.

PS If you own a website, be part of the solution and not the problem. Don’t allow bad ads such as pop-ups or overlays. Don’t let videos autoplay (and especially not with the sound on). Block any advertiser which seems dodgy and generally just treat your users with some amount of respect. You’ll make more money from ads that way anyway, as a user coming back time and again is much more valuable than one who clicks an ad once but hates you.“

Cost Per Action (CPA) is an advertising model that simply means that an advertiser pays every time an ‘action’ is undertaken as a result of an online ad.

Note – I left off sales because CPA also can be used to stand for Cost Per Acquisition – which means paying whenever an ad causes a sale.

For this reason, most of the time when someone says CPA they mean that they are paying for sales, but technically a CPA campaign can be paying for anything. Just make sure to agree with the advertiser what that exactly is before you accept any CPA deals.

How to calculate CPA

The CPA formula is: [You can also calculate your CPA using this convenient CPA calculator]

Note – A ‘conversion’ is another way of saying any desired action.

Basically, you just take the amount of money spent on/or earned from an ad and divide it by the number of desired actions that ad caused.

Who gets paid for actions?

CPA campaigns are actually quite technically complicated, despite seeming to be the simplest of online campaigns. This is because it is very hard to say which ad actually caused an action.

Instinctively it would seem that a sale which comes directly from a click on an ad is the only thing that should be paid for. However early CPA models tried that and they paid out so little that websites began refusing to take CPA deals.

The problem is that people don’t necessarily buy things immediately after clicking on an ad. The full picture is in fact more complicated than that even.

An advertiser is selling bikes. A person is interested in buying a bike and when they see an ad for a bike on ‘Website A’ they click on it. However, they decide they don’t want to buy a bike after all and think no more of it.

10 days later the same person is on ‘Website B’, and they see a different ad for a bike from the same advertiser. This time it makes them REALLY want to buy a bike. They don’t click on the ad this time, but just type the URL in for the advertiser’s website and buy a bike immediately.

The answer is that in most cases it would be ‘Website B’ who would get paid. This is because it was the last point of contact that person had with an ad from the advertiser – even if it was just looking at the ad.

Note: Some advertisers are moving towards a multi-touch attribution model, in which multiple websites get paid a percentage for the same conversion. While this is a fairer model in many ways, it’s far from common or standard yet.

How do advertisers know who to pay for actions?

CPA ads are usually set up with what is called ‘Conversion Windows’. This means that when an ad is loaded on a computer, a cookie is then stored on the computer with details of the ad and website. If someone clicks on that ad, then the cookie records that too.

From when the cookie is stored on the computer a sort of countdown starts – usually 1 day if there is no click, and 14 days if there is a click (although these both are up to the advertiser).

These are called conversion windows. So if someone clicks on an ad, then buys a product anytime in the next 14 days, then the website the ad was on gets paid for that sale. However if (as in the example above), someone clicks an ad, then sees the ad on another site and then purchases within one day then the second website gets paid.

There is a slight problem baked into this – in that both the websites in the above example will think that they should get paid. They can both only see data from their own site, and each will have recorded a conversion when the bike is sold.

This is why it is advertisers who have the last say on who gets paid. They generally do this by ‘deduping’ the data – attributing each sale to a website, then paying out based on their own results. This can be incredibly frustrating for websites, which is why CPA campaigns need to be continually re-evaluated to see if they actually make financial sense to all involved.