What does View-Through Rate mean?

The View-Through Rate (or VTR) of an ad is the percentage of people who saw an ad all the way through, out of all the people who had the ad load on their computer. It is usually used for video ads.

So for example, if 200 people loaded a video ad, and 10 of them watched the whole thing, the view-through rate would be 5%.

The VTR equation is: Traditionally used for video advertising, VTR is also sometimes applied to standard ads too (usually when they contain animations). A video is considered as being “Viewed-Through” if a user did not skip it, or close the browser window before it ended.

It has proved a paradoxical metric. If a user clicks on an ad, they are taken away from the ad. Even though they go to where the advertiser wanted, they are not counted as a View-Through.

Therefore a high CTR will necessarily mean a low VTR. Deciding which is more important is up to the individual advertiser in each case.

This can be problematic as the purpose of most ads is to drive traffic or conversions. To do this an ad needs to send a user somewhere. It makes intuitive sense that the sooner a user feels compelled to click an ad, the better the ad is. However, this goes exactly against what VTR is measuring.

Note: View-Through Conversions, on the other hand, are a brilliant measure of the effectiveness of an ad. If a user watches a video to the end and then makes a purchase, this is solid proof that the ad was convincing. VTR on its own however does not mean that much.

Video advertising can be very lucrative, and if advertisers want a high VTR, you should be accommodating.

Adding pre-roll video ads to your videos makes a lot of sense in terms of revenue. Allowing these ads to be skippable may lower the VTR of ads, but it will also annoy your users less. Keeping users happy with your site will, in the long run, lead to more video plays. As most advertisers pay on CPV rather than VTR, it still makes more sense than making your video ads unskippable in most cases.

To give videos a good chance at being viewed through to the end, reduce clutter on video pages. The fewer other things on your video pages for a user to click on, the less likely they are to wander off mid-video. Video ads will likely make you much more than other ads too, so not having other ad units on pages with videos on makes a lot of sense.

Many advertisers, of course, want their whole video to be seen to the end. The end of a video ad is where the strongest CTA is put, so of course, they want people to see it. When a user clicks an ad, however, they don’t see it.

Some publishers/platforms try to get around this by simply pausing a video or ad when it is clicked, giving users the chance to see the end when they return. This, of course, is unlikely to happen. People don’t generally come back for more convincing once they have already been convinced!

We at The Online Advertising Guide. therefore very much consider this to be a secondary metric. CTR (or CPA or eCPM) are the main metrics that should be optimised towards. VTR should really only be used as supporting evidence to an ad’s success. The people who made the video may want it to be seen to the end. In most cases, an advertiser doesn’t need a high VTR for their ad to be successful.

Having a viral video ad is great, but people don’t have to see the whole thing for the ad to be effective!

Note: Non-linear Video Ads are the exception to this rule, as they will often have a follow-on action at the end of a video play. 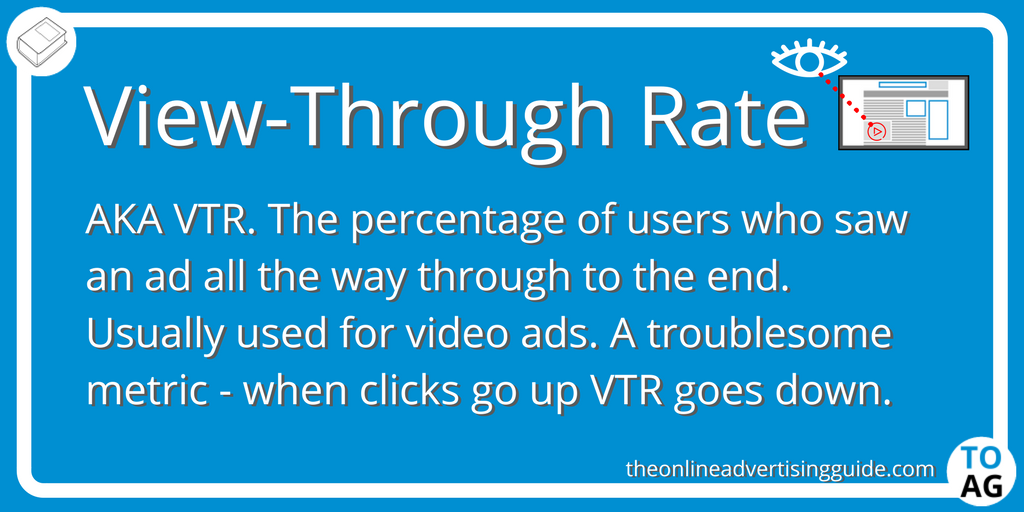