Return On Ad Spend (ROAS) is a metric used in online advertising to calculate how much revenue you earn in relation to the amount you spend on ads.

It is a form of ROI that only takes into account money that is directly spent on ads. ROAS answers the question – if I spend $1 more on these ads, how much can I expect to get back in return?

Calculate your Return on Ad Spend with the ROAS Calculator >

Return On Ad Spend is a useful metric to:

ROAS is even arguably a better measure of success than Conversion Rate. This is because it takes into account the amount earned from ads and not just conversions. This is especially important if you are selling multiple products through one set of ads.

Please note: ‘Return’ does not mean profit. If you sell an item for £5 then your return for the purposes of this metric is £5. This is regardless of how much the item cost you to procure or produce.

Similarly, ‘Ad Spend’ in this metric only takes into account money spent directly on the ads. This figure does not take into account the cost of creating, running, or tracking ads. The ad spend is the budget that is spent within the ad platform only (such as Google Ads, or Twitter Ads).

The Return on Ad Spend equation is: 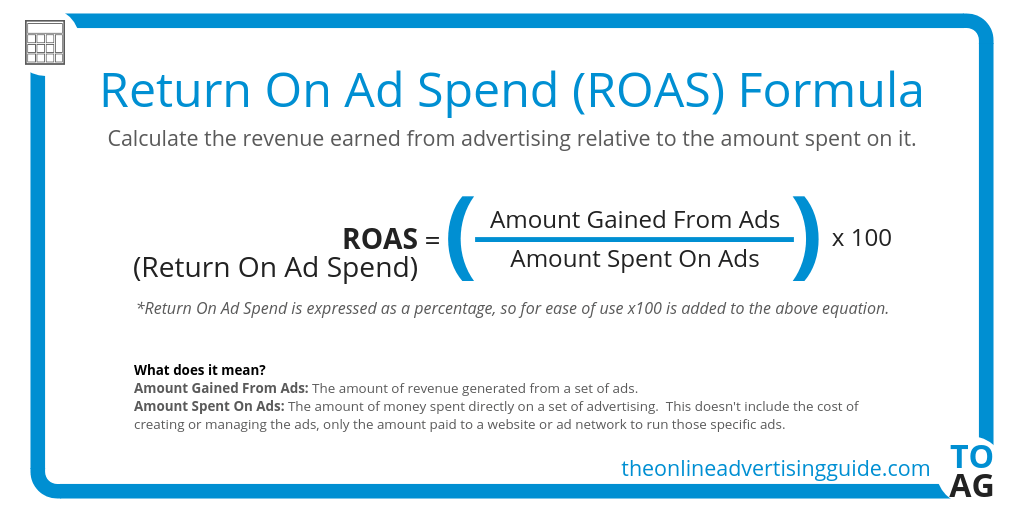 According to an often-quoted (but impossible to find) study by Nielsen, the overall average Return on Ad Spend is 2.87 (or 287%). This means that for every $1 you spend, you receive $2.87 in return. This broad average is only useful as a general benchmark.

There was a follow-up article from Nielsen in 2016 which broke the stats down a bit further. This broke down stats by industry and channel (not digital channels, unfortunately) and showed a range of ROAS levels from 2-4 (or 200% to 400% if you prefer).

If you are looking for a benchmark, somewhere between doubling and quadrupling your money is good (but not remarkable).

Remember: This metric only takes into account ad spend and no other money spent on marketing. Therefore you should aim for a ROAS far above 100% to ensure you cover your costs. In fact, to really make sure you are covering costs, you should calculate your ROI instead.

The ROAS you record is very dependent on the type of attribution you are using.

For example, if you use ‘last-click’ attribution, then you are strongly favouring ads that appear at the bottom of the funnel (such as search ads).

To counter this problem, you should consider some type of multi-channel attribution such as time-decay.

Other names for ROAS (synonyms)

ROI. ROAS and ROI are roughly the same, but ROI takes into account all expenditure, while ROAS is only about ad spend. 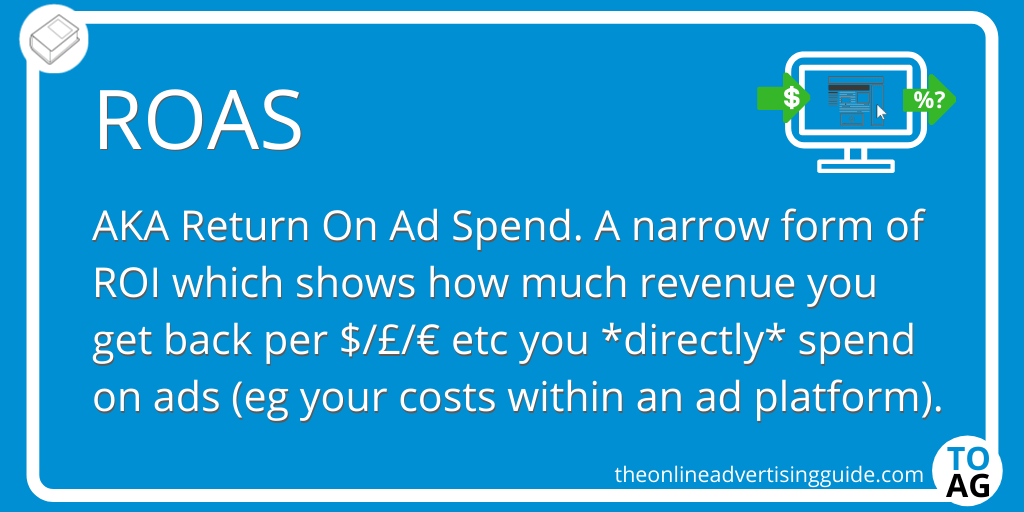