What Is Mobile Advertising?

Mobile Advertising refers to advertising which is built specifically to appear on a mobile phone (or cell phone in US).

There are two primary types of mobile advertising – In-App or Web-Based. In terms of effectiveness and price, there is not really any difference between the two types as of yet. 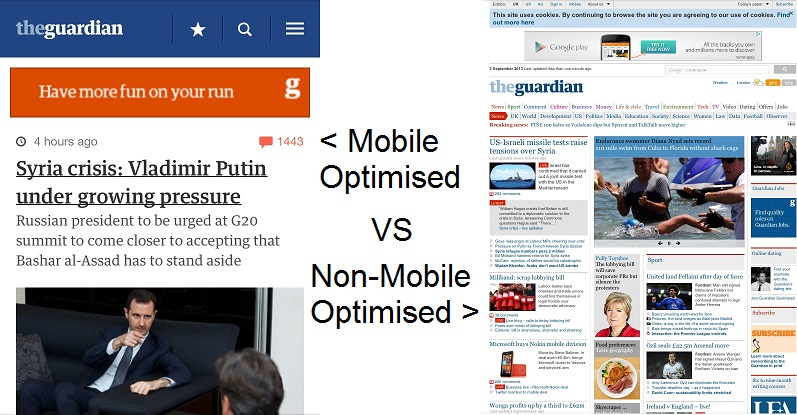 The main difference between these two types of site views is obviously size. Mobile optimised sites make use of the reduced screen size in a better manner, which is why they exist in the first place.

This translates to ads too: notice the banner ad on the top of the Mobile Optimised Site is a good size proportionally and easily visible.

For the Non-Mobile Optimised site a leaderboard ad is visible, but it’s somewhat lost in the clutter of the page, which is just the desktop site resized for a mobile screen. This happens because IAB standard ads which are meant for a desktop screen will still appear on the site if it is loaded on a mobile phone and mobile devices haven’t been excluded from targeting settings.

Ads displayed in this way will not perform well, as they appear too small for people to make an informed choice about clicking on them (ie, most clicks will be accidental).

However if you have not made a mobile version of your site, but still want to monetize people visiting fret not. There are several companies that have come up with a solution – run a type of overlay ad targeted to mobile phones only, which is about the size of the ad displayed on mobile optimised sites. These will then appear at the top or bottom of the screen as well as the misplaced desktop ads.

In-App advertising targets users in mobile apps and can appear in any format. They can appear as small strips at the top or bottom of the app (often changing out ads over time), as well as sometimes appearing as full-screen ads during loading pages or in-between app usage.

The effectiveness of In-App ads is highly variable as it depends on the app and ad, but as it is a fast-growing marketplace it should not be ignored. 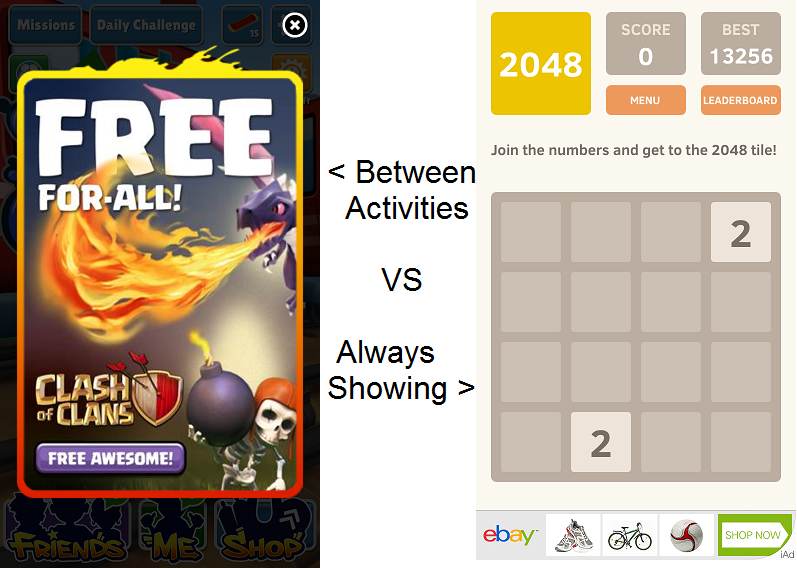 In App Ads Between Activities vs Always Showing

As Mobile ads are viewed on smartphones this has created new opportunities for advertisers. Here are some examples of the biggest things in mobile advertising:

Who should use it: People trying to increase App Downloads.

Where better to advertise apps made for smartphones than on smartphones themselves? Despite desktop ads that lead to downloading an application being roundly rejected by the internet, install ads are thriving on phones. This may be because of the relatively low occurrence of viruses on phones, or else simply due to naiveté.

Regardless, paying to have an app downloaded is exceptionally commonplace, with the only real pitfall being tracking. With Install Rates being as low as 1% – even if someone clicks an ad to download an app it is still unlikely that they actually will install it.

This is why CPI advertising is used instead of CPC for app install ads, and if you’re looking to get involved this is what you should do.

Who should use it: Companies that sell over the phone.

It’s now possible to make hyperlinks go straight to a phone number. On a desktop computer, this isn’t really helpful. On a smartphone, it’s a revelation!

Having ads link straight to phone numbers make a lot of sense for a lot of companies. If your companies make sales over the phone, this is definitely a good option for you.

Who should use it: Companies with a storefront.

Being able to geo-target advertising isn’t anything new. Shops have advertised locally since before the internet was invented after all.

The ability to target people as they come closer to a shop is a game-changer however. By targeting mobile phones and a small radius around your location, it is now possible to hit people as they are passing by your store.

Shop owners should use this type of ad to hit people at their moment of need.

7 Things To Know About Mobile Advertising

It took a while to take off, but mobile advertising is now an exceptionally large industry. It takes a bit of know-how to cash in on it, however.

The most important thing to do is to consider it a specific revenue stream. You can’t expect your desktop ads to cover mobile users too as they look weird in most cases. Use whatever technology you can to ensure that different ad types appear to mobile users.

Overlays and footer ads, as shown above, are commonly accepted setups. AdWords runs both of these ad units, and only shows them when a click is likely, so they can be less intrusive than they immediately seem.

Another reasonable choice is adding MPUs within content to users. Ideally, these shouldn’t appear more than once every 2 screens – as in a user can scroll down two full screens before seeing an ad again.

Over-filling a mobile site with ads will drive away users faster than on desktop sites. The reasons for this seem mainly to be:

This is why ad-blocking is actually provided by mobile networks in some cases. This means that mobile advertising cannot be relied on, unfortunately.

If your site is large enough, seek out a mobile advertising network to work with and take their advice on maximising revenue.

Mobile advertising has not yet been standardised by the IAB (although it is on its way).

This means that you cannot create a “mobile ad unit” and then run it across any site you choose, such as with a 300×250 or 728×90, as different sites run different ad sizes.

It’s not just the ad sizes that vary either, but the technology that runs them differs too, as does the screen size of the devices they are intended for. This all means it currently is difficult to buy mobile inventory at scale for a reasonable cost.

There is however an incredible amount of ad inventory available to buy from each individual vendor, so if you can strike up a good working relationship with a large mobile network it might be worth your while.

As always, The Online Advertising Guide recommends testing out what is best for you. With Mobile advertising it may take a while to do a lot of testing as the industry is fragmented, however, if you can find a positive ROI, then get stuck in. 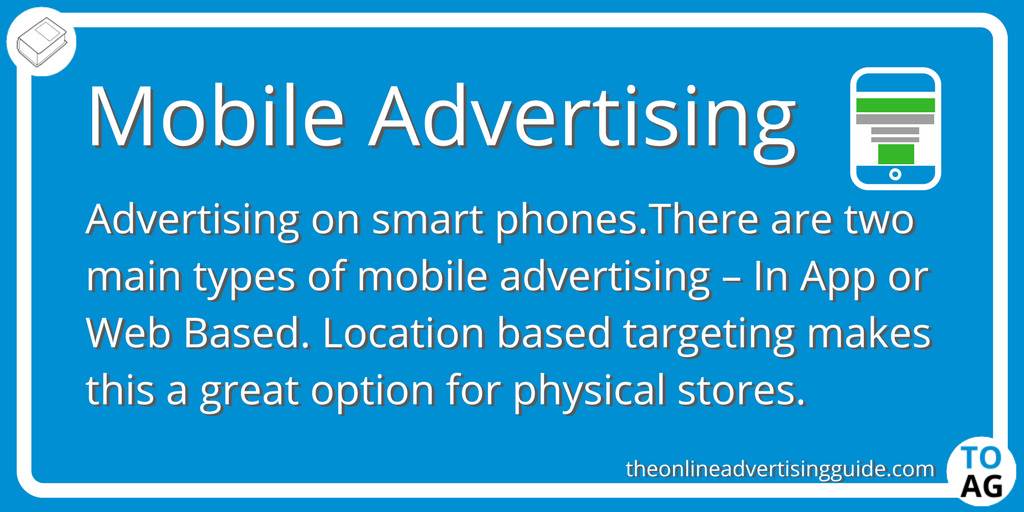