LTV (often called Customer Lifetime Value or CLTV) is an attempt at predicting the amount of profit that can be expected over the entire relationship with a user. The “lifetime” in this metric does not refer to the lifespan of a human, rather the full length of time that a person interacts with a business.

For example, if people were only expected to visit a website twice, then their LTV would only be calculated based on what people spend on the site during two visits.

Why Use Lifetime Value?

LTV can be used to help determine how much should be spent on advertising to get a new customer. By working out your profit margin by using lifetime value instead of the profit from an individual sale, you can comfortably increase CPA bids which in turn will lead to more customers.

A shoemaker typically charges £50 per pair of shoes they sell, of which £10 is profit This leads to their digital marketer, Geoff, setting the maximum CPA bid at £5 to ensure a profit is always made. As this is quite a low CPA bid for such a high-value product his ads lose most RTB auctions – but still win enough to bring in 100 sales per month.

The ad campaign cost £500 per month to run and brings in £5,000 in sales. He writes in his report that his ads bring in £500 profit per month or £6,000 per year. Even though this is an ROI of 100%, it is still an insignificant amount of profit for a shoe company, and Geoff fears for his job.

However, after talking to their Business Intelligence Analyst Geoff find out that most people who buy his companies shoes buy another pair of shoes each year for a further four years on average. This means that his ads profit are actually much higher – £500 in the first month from the initial ad spend, but then £1,000 a year for the next 4 years without any additional ad spend.

This means each month his ads are bringing in £4,500 in profit each month on average (over a five year period) or £54,000 per year in total. Not bad, but still not amazing for a shoemaker.

This gets Geoff thinking – instead of thinking about profit per sale, he should think about the profit per customer. Each customer buys 5 pairs of shoes in total meaning they have a lifetime value of £250. This brings in a total profit of £50, but his CPA is only £5. He knows the low CPA has been holding the ads back, so increases it to £25, and suddenly the ads start winning a lot more bids.

Sales increase to 500 per month… but the boss notices that they are spending £25 on advertising per pair of shoes sold – which still only brings in £10 profit (for a loss of £15 per sale).

Geoff explains that each customer is expected to come back 4 more times on average. This means that their Customer Lifetime Value is £250, and so for every £25 spent they are bringing in £250 sales over the next five years – which is £25 in profit after the cost of his ads are taken out.

Imaginary Geoff no longer fears for his job, and will probably increase his CPA bids further still.

How you calculate Lifetime Value depends on how you make money. This is the general LTV formula: 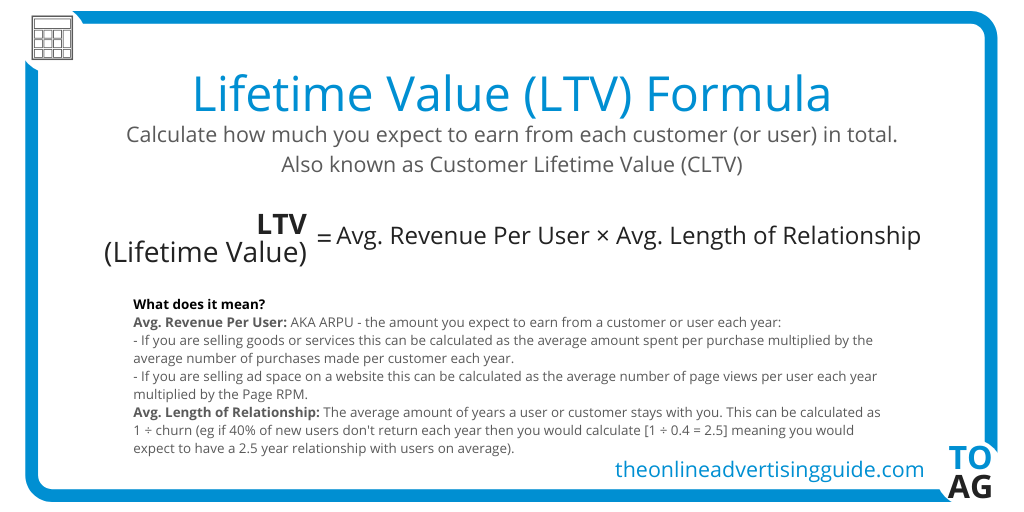