What is an Install Rate?

The Install Rate of an ad campaign means how many clicks on an ad it takes to lead to an installation of an app. It is mainly used to optimise CPI (Cost Per Install) campaigns on smartphones.

So for example, if one person installed an app after clicking on an ad after it has already had 99 other clicks, that will give you an Install Rate of 1%.

What does Install Rate mean?

CPI advertising has come to be a strong force in the mobile advertising industry, as users on a mobile phone will be most interested in clicking ads that relate to their phone. However, as with CPA campaigns (which CPI campaigns are really a subset of), just because a user clicks on an ad it doesn’t mean they are going to follow through on that action.

This is where install rates come in. This is a measure of how many installations each click leads to, and is currently around between 1-4% across the industry on average. That means an ad would need between 25 and 100 clicks to get one install, which is no mean feat.

The Install Rate equation is: 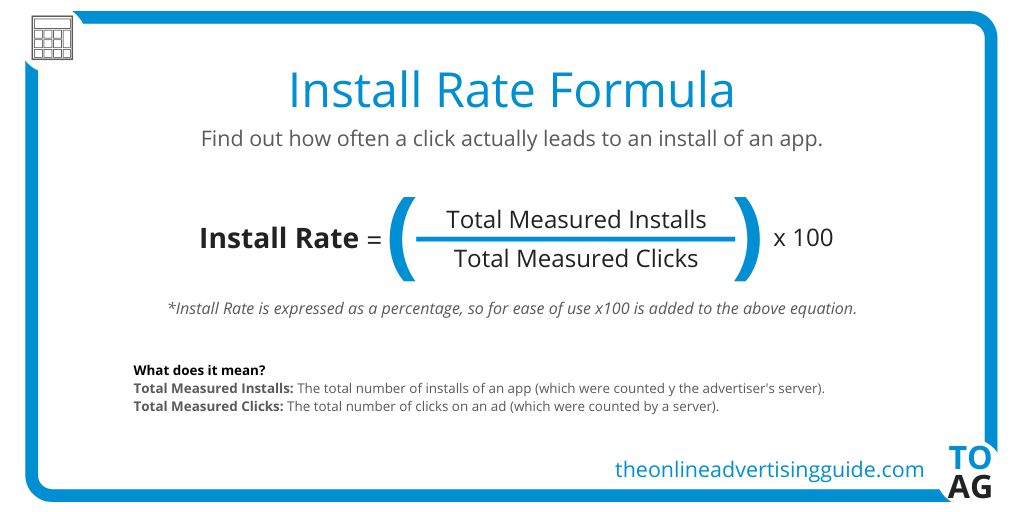 Install Rates vary greatly based on country, which is thought to be a result of varying internet speeds. Targeting your app ads at countries with superfast broadband just makes sense.

Other names for Install Rate (synonyms)