What does Impression RPM mean?

Impression RPM is the amount of revenue paid per 1,000 impressions. It is a metric mainly used by Google AdSense and tells you how much they will pay you for your ad impressions.

Work out the RPM of your campaigns with our RPM Calculator >

The above formula shows the revenue as being estimated. This is because this metric is generally an estimate. Like eCPM, it takes many campaigns of many different types and combines them to estimate total revenue, and then divides that amount up between the impressions delivered.

Impression RPM is often shown in real-time, which also means the amounts have to be estimated. It could include conversion data for example, which may not be confirmed that quickly.

The equation for Impression RPM is:

Even if one advertiser took all the impressions on a site in a CPM deal, the CPM and RPM will probably still not line up.

Johnny’s Fruit Juice has a big ad spend and buys up all the space he can find on fruit juice websites. He pays £5 CPM to all sites that he works with and goes through an agency. The agency uses a third-party ad server to deliver the ads.

Fruit Juice World is one of the websites that the agency chooses to place Johnny’s Fruit Juice ads on. They work with an ad network with who they have a 50% rev share.

As a result, this means Fruit Juice World are actually only paid half of the CPM of campaigns booked with them. This gives them an Impression RPM of £1.45. 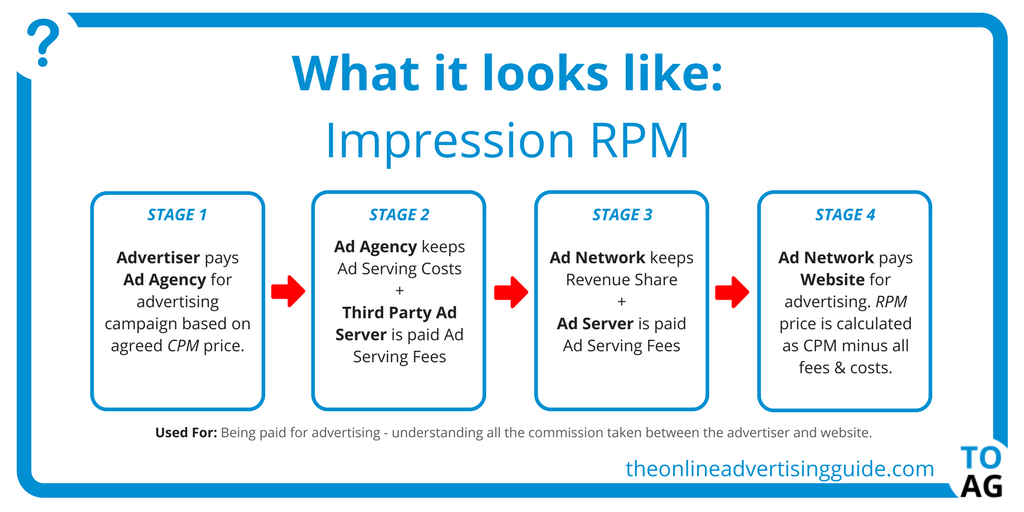 Note: It would actually not end here most likely. Ad networks could have their own ad serving fees too, and often give agencies discounts of up to 20%. Therefore it wouldn’t be surprising if the final figure from a £3 CPM was more like £1 Impression RPM. The ad network would only present this final figure to the website, however, and the agency would never break the figures down like this, so neither would find this out.

This is one of many reasons why direct deals can be advantageous to both advertisers and websites. However this of course doesn’t take into account the added value of the expertise both advertiser and website are getting, and the consistency of revenue/opportunity they are provided. It is much more difficult to go it alone!

Other names for Impression RPM (synonyms) 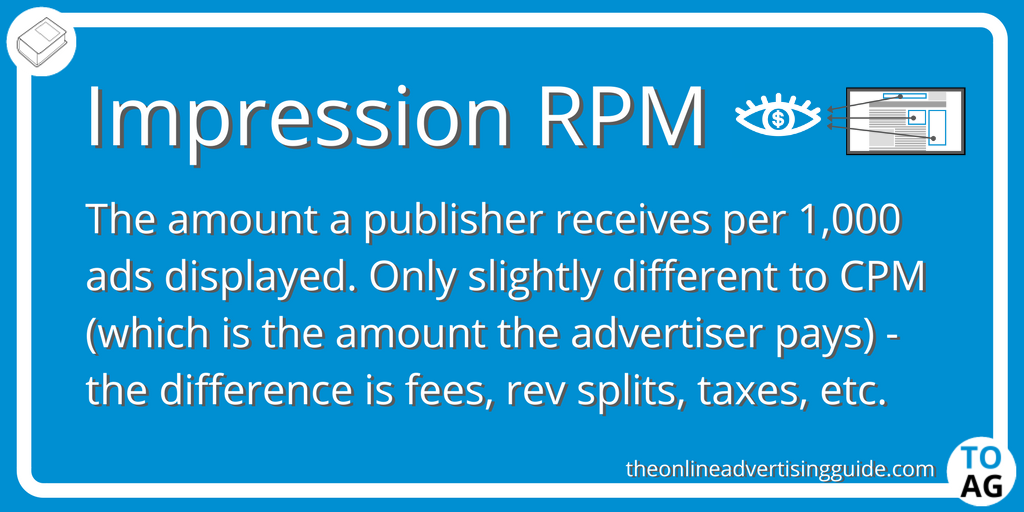