In digital marketing, half-life is defined as the time it takes for a piece of content to receive half of the total number of clicks or engagements that it will ever receive.

Knowing the half-life of your campaign is useful as it helps you adapt rapidly to the audience’s demand.

What is the Half-Life of Social Media Posts?

The half-life of a social media post is the time it takes for the post to receive half of the attention it is going to get, including likes, comments, clicks, shares, and so on. Some of the Social Media half-life stats include:

Tweets have the shortest lifespan of other social media posts. An average half-life of a tweet is about 24 minutes. Since Twitter is a fast-paced social platform, posts tend to get buried quickly.

An Instagram post’s average half-life is about 72 minutes. The higher the quality of the post, the longer the half-life is. A high-performing post on Instagram averages about 13 hours to receive 50% of its total engagement.

A pin has an average half-life of 04 months, which is much higher than any other social media platform. Posts on Pinterest do not disappear, they remain on the platform and show up on feeds as long as they are relevant to a user’s search.

Half-life is a concept that is used in marketing to determine how long an ad has an impact. Understanding the half-life concept in digital marketing is a great way to track your performance and set up an efficient posting calendar for your campaigns. 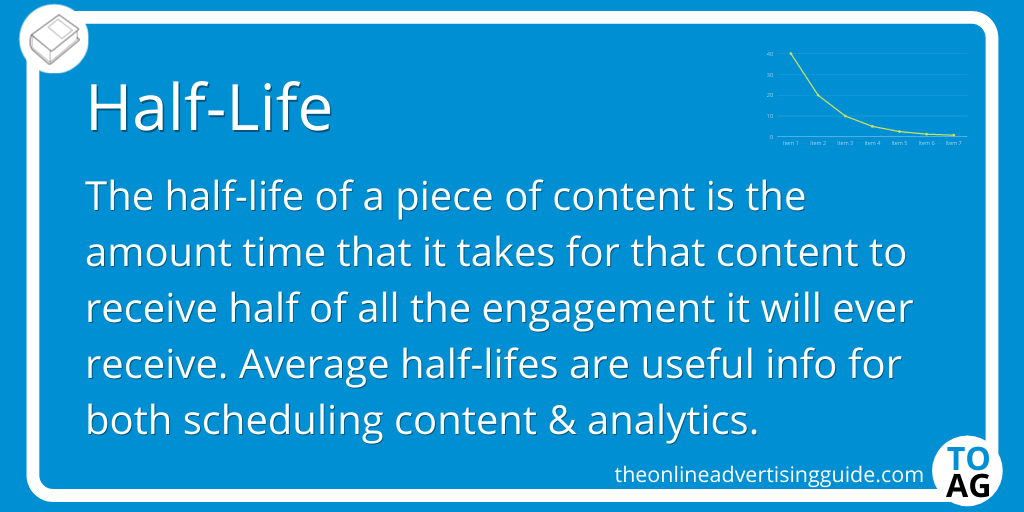