What does Frequency mean?

In online advertising, frequency refers to how often an ad appears to a single user in a certain time frame. It is most often measured and expressed as a per hours figure, even when talking about a day. For example, if an ad appeared to a single user 6 times in one day, it would be said to have appeared 6/24 times (or 6 per 24 hours).

The reason why frequency is an important measure is that the number of times a user sees an ad affects the likelihood of them clicking on it (or buying a product because of it). In traditional advertising, it is thought that someone needs to be exposed to an advertising message about 5 times for it to be effective – this is referred to as opportunities to see (or OTS).

For online advertising, it depends on the ad unit but generally speaking, the best performance comes from a 3/24 frequency cap. This means each user sees an ad no more than three times a day. If an ad is more invasive, however (such as a pop-under, or overlay) then a 1/24 cap is preferable. Both of these caps are likely the most amount of times a user can tolerate seeing a single ad campaign. Once they are annoyed by it, the effectiveness of a campaign tails off quickly.

If a single user sees an ad too often, they will likely tune it out. More than that, it is a waste of advertisers money to show the same ad repeatedly to a single user. There is only so much any single user can click (or purchase from) one ad after all!

To work out the approximate frequency of an ad,  you can divide ad impressions by unique users. This will be a rough measure only, as users will have seen the add different amounts of times. However, if you have a frequency cap in place, it will be quite accurate comparatively.

The frequency equation is: 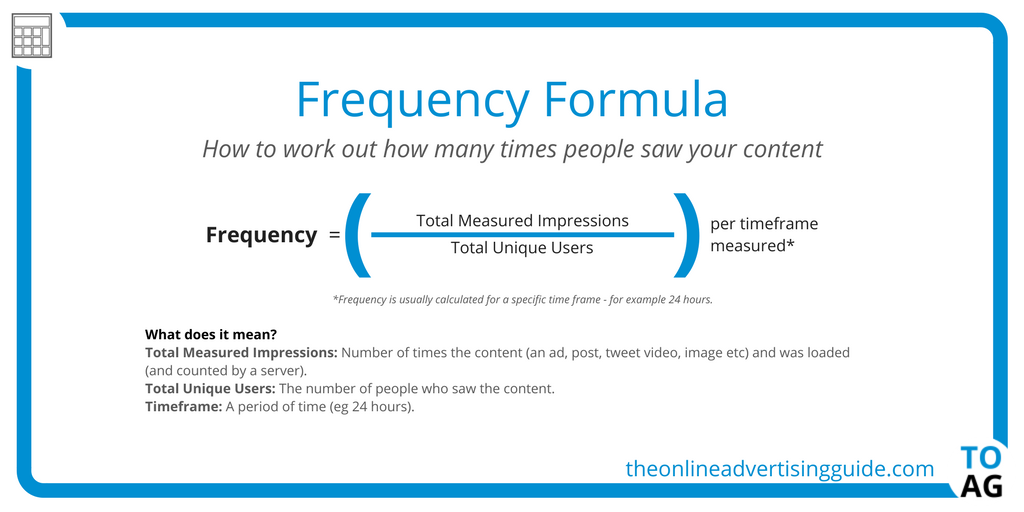 Example: Thirty impressions served to three unique users in a 24 hour period would be expressed as 10/24 (as each user saw 10 impressions).