What does CPI mean?

The CPI price is the amount paid per installation of an app on a mobile/cell phone.

For example, if you booked a campaign to have your app installed 800 times at a CPI rate of $8 then each install would cost you $8 and in total you would pay $6,400.

CPI stands for Cost Per Install and is essentially a type of CPA campaign for apps. It is a new type of pricing model specifically designed to track installations on smartphones of apps.

CPI is sometimes used to mean cost per impression but as that is a pretty meaningless value, CPM (Cost Per Thousand Impressions) is used far more often.

Note: Payments are triggered on installs, not on users getting to an installation page. Therefore the CTR is not a good way to optimise these campaigns, as the Install Rate is between 1-4% (which means only 1-4% of clicks lead to an installation. This makes this type of deal kind of harsh for mobile publishers, however, it is still mostly better than the alternatives (CPM rates on mobiles can be rock bottom).

The equation to work out the cost per install couldn’t be simpler: The average Cost Per Install is over $3 apparently, and because of this many mobile ad networks have re-positioned themselves to focus on this type of advertising. 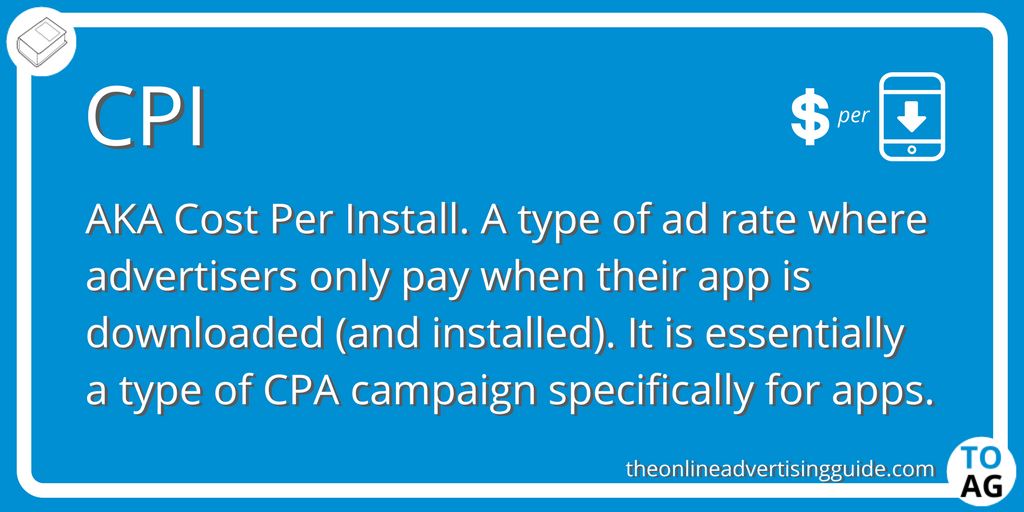