The Conversion Rate (CR) of a campaign is the number of conversions achieved per click. It is mainly used to optimise CPA campaigns but is actually rarely used as it is such an inconsistent measure, even within a single website (see the example under Top Tips below).

The Conversion Rate of a campaign is the percentage of people who clicked on an ad and then completed an action/purchase/conversion. For example, if one person made a purchase after an ad had been clicked on 100 times, that will give a CR of 1%.

What does Conversion Rate mean?

The Conversion Rate, as with CTR vs clicks, is theoretically a better metric to use than just conversions. This is because it helps you work out the speed at which inventory is causing conversions. In this way, it is easier to compare campaigns/publishers which are running different amounts of impressions.

A conversion is a catch-all term for an acquisition (sale) or action which results from a CPA campaign. It comes from the idea of converting a non-customer into a customer.

The Conversion Rate formula is: As clicks are part of the CR equation, it may seem reasonable to optimise towards CTR to improve conversions. However, the below example demonstrates why this isn’t nearly foolproof.

If in January a nutrition website with 1,000,000 impressions per month only has 200,000 Run Of Site ads appearing, then a CPA campaign for fruit on the site would have access to 800,000 ad impressions. This would likely include some on the homepage and the sections about fruit.

However, in February the same site only has two campaigns running. The first is a homepage takeover for the whole month. The second is a sponsorship deal across the fruit section of the site, which in total makes up 200,000 impressions.

The fruit CPA campaign would still have 800,000 impressions available, however, the best pages (and users) would be gone, so it would likely convert a lot less. It may not get a relatively different amount of clicks, as the ads and the website line up quite well, however, it will likely get many fewer conversions.

The above example is why advertisers can’t care too much about conversion rates. They want to keep ad impressions down to reduce ad serving costs, but they have to accept that sites have other deals going on and so the inventory they get will be of variable quality. Advertisers, therefore, focus on the number of conversions they get in total usually.

For publishers/ad networks, however, the conversion rate can be much more useful in that they can calculate it for placements, and try and push more CPA ads there. Moving inventory around like this is the key to maximising revenue for a site (this process is often called yield management).

7 Things To Know About Conversion Rate

Other names for Conversion Rate (synonyms) 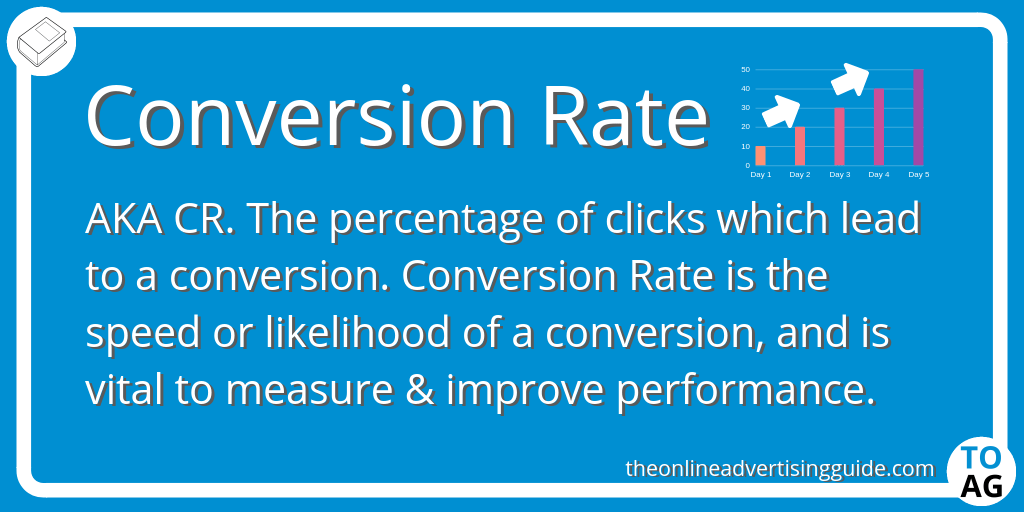