Facebook’s Aggregated Event Measurement Protocol is a change to how conversions are measured by Facebook Ads. Essentially it means that advertisers are limited to tracking a maximum of 8 conversions, and also need to rank them in order of importance.

Facebook will then use this ranking to decide how to track conversions from users who opt-out of tracking. If a user who has opted out of Facebook’s tracking makes multiple conversions after clicking on an ad (such as buying something and then signing up for a newsletter), only the highest-ranked conversion will be reported by Facebook.

Facebook do this with a solution that they say “is analogous to Apple’s private click measurement”. This basically means the conversion is tied to the ad, and not the user.

Apple’s iOS14 was released in late 2020 and came with a raft of new rules for Apps available on Apple devices.

This includes a new prompt that all Apps were required to add which allows users to opt-out of data being shared outside of the app and a new tracking framework that apps have to use.

Facebook’s response was the Aggregated Event Measurement Protocol (AKA AEM), which is intended to mitigate the effects of this update for users of Facebook Ads.

In Facebook’s own words: 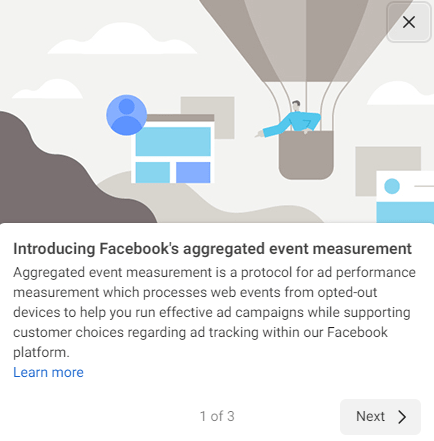 Aggregated event measurement is a protocol for ad performance measurement which processes web events from opted-out devices to help you run effective ad campaigns while supporting customer choices regarding ad tracking within our Facebook platform.

The Aggregated Event Measurement Protocol means that all advertisers will now be limited to 8 conversion events. These events will be ordered, and only the top event will be registered by Facebook within the conversion window.

Note: Also due to the iOS14 update, Facebook will no longer allow post-view conversions at all. The default post-click conversion window will be 7 days by default. 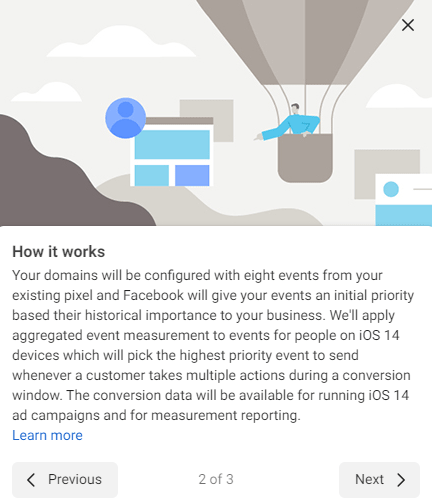 Your domains will be configured with eight events from your existing pixel and Facebook will give your events an initial priority based their historical importance to your business. We’ll apply aggregated event measurement to events for people on iOS 14 devices which will pick the highest priority event to send whenever a customer takes multiple actions during a conversion window. The conversion data will be available for running iOS 14 ad campaigns and for measurement reporting.

Facebook will initially order your conversion events for you automatically, but you should log in to the Events Manager and order them yourself in order to get the most out of your advertising. 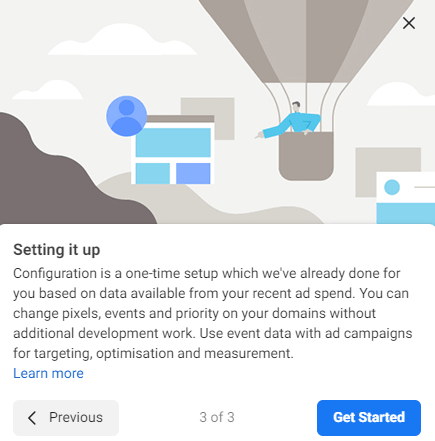 What Does AEM Mean For Your Results?

What this means overall is that there will be less data available to users. If someone who has opted-out on iOS clicks on an ad and completes two conversion events (eg buys something and signs up for a newsletter), Facebook will only tell you about one of them.

It will also likely mean that in the short-term at least, Facebooks algorithms won’t work as well as it has less data to work with. This in turn means that results from Facebook ads will get worse. This is doubly true due to the change in conversion windows meaning Facebook will be catching fewer conversions too.

It is important to note however that Facebook recording fewer conversions is not the same as there being fewer conversions. Facebook Ads have always overestimated the number of conversions they cause (as do all ad platforms). Because of this, you should always have a separate system to get your conversion data from, which can track across platforms (such as Google Analytics).

In the long run, we can’t know the effects that Facebook’s Aggregated Event Measurement Protocol will cause. It is very likely that Facebook’s algorithm will catch up and there will be little difference in performance in the long run. It is also likely that the excess of data agreements that users are asked to sign for apps and websites is not sustainable.

I would assume/hope that eventually a different framework of less intrusive tracking will be created so that we don’t have to agree to something every time we visit a website.

What Should  You Do To Prepare For Facebook’s Aggregated Event Measurement Protocol?

If you use Facebook Advertising then there are a few things you should do to minimise the impact on your business.

Firstly, follow Facebooks advice. Go to Events Manager and verify your domain, and then order your conversion events by their value to you. This will ensure the data you are getting is the highest value, and Facebook’s algorithm will be working towards your most important goals.

If you have an app that uses Facebook SDK for iOS then update to version 8.1 or above as that has iOS14 support.

The most important thing to do is to make sure that you use UTM tracking on your Facebook ads. This is so that your results are recorded in Google Analytics correctly, even if they are not in Facebook Ad Manager.

UTM tracking is the simplest form of tracking available. It just means adding some variables to the end of a URL that Google Analytics can read, but which don’t change where the URL takes you.

For example, this link will still go to our homepage even with all the extra stuff at the end:

If someone clicks on one of your Facebook Ads and it uses UTM variables, then Google Analytics will add that session into all the correct reports without any trouble. This will help you to keep your tracking straight.

You can generate UTM links using this UTM Link Builder from Google. I would recommend building them directly in Facebook Ads, however, so that you can still use the “Link” or “URL Parameters” columns to sort your ads.

To add URL Parameters within Facebook, click on the ‘Build a URL parameter’ link. This is found at the very bottom of the ad set-up screen. 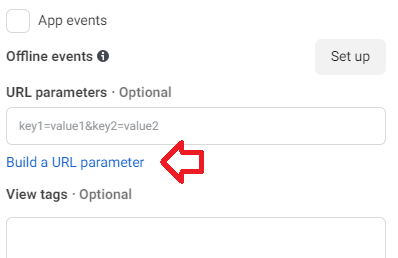 Once you click this link you’ll be shown this screen, where you can easily add your UTM variables: 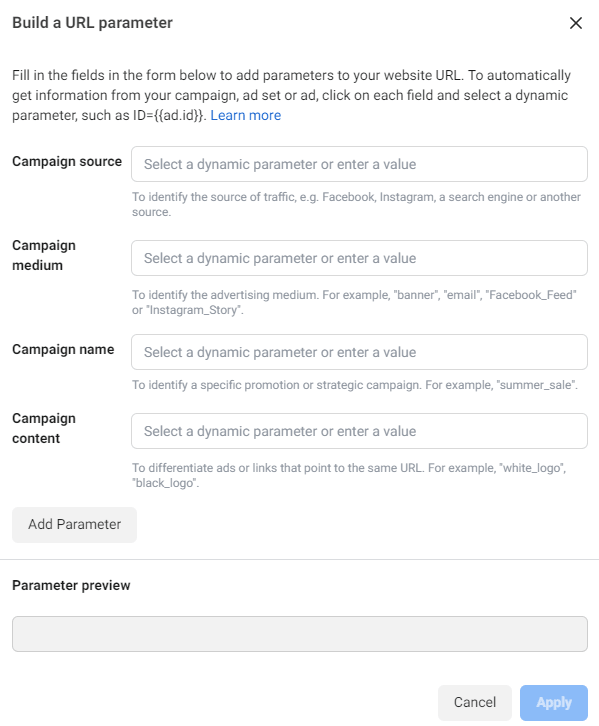 Facebook does a pretty good job of explaining each of the fields, so just follow what it says you should be ok. You should always add at least the source, medium, and campaign.

One thing I would stress when using UTM tracking is that you need to be consistent with the variables you use. Always call it facebook.com or instagram.com in the source field (you should advertise to these two platforms separately). Always call it #paid-social in the ‘Campaign medium’ field.

If you are inconsistent when filling in these fields, then you’ll have problems when looking at this data later as they’ll be filed separately in Google Analytics. 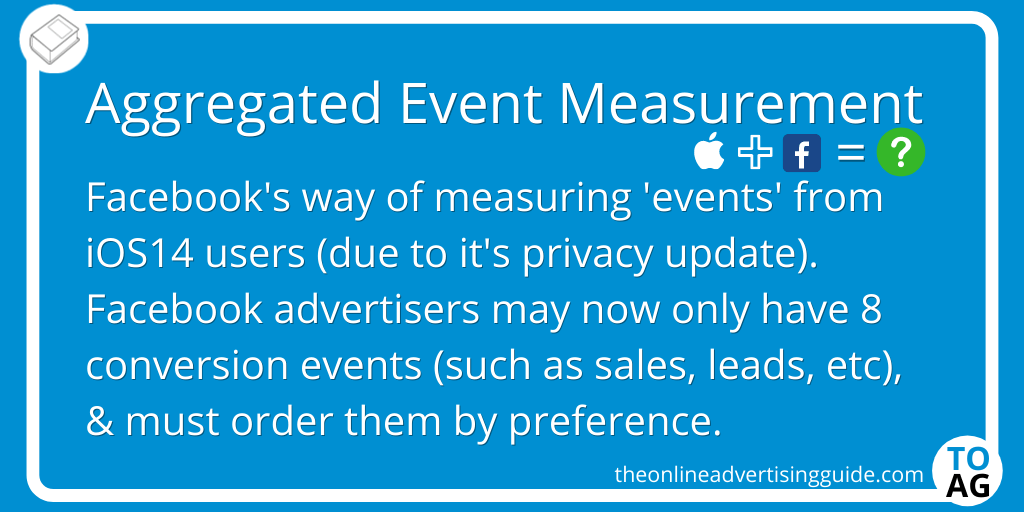