What does Added Value or Value Added mean?

In online advertising, Added Value (or Value Added) refers to extra inventory added to a sale (for free) to sweeten the deal for the buyer. It is a surprisingly common term used to cover any extras a salesperson throws in to close a deal while maintaining the illusion of keeping to a lower price point.

For example 10% extra impressions might be added onto a deal as Added Value so the salesperson can claim to have sold at a CPM 10% higher than in reality. This is a strangely legitimate practice.

This is often done as compensation for a previous deal that disappointed an advertiser somehow. Also often used to convince an advertiser to take a chance on a publisher or ad network it otherwise wouldn’t consider.

Although it can (of course) be a highly effective method of enticing advertisers to buy ad space, it is a slippery slope. Depending on how you run added value impressions, it can increase the likelihood of under-delivery dramatically.

The tendency is to run the extra impressions with £0 as their CPM. This is honest, however, it means that most ad servers will favour paid for ad campaigns over value-added impressions. Considering that the whole point of giving inventory away for free is to impress advertisers, this makes no sense.

Therefore it is imperative when delivering added value impressions that they are simply added to the main campaign goals. Then give the whole campaign a reduced CPM. This will help your record-keeping as well as your delivery. Just make sure to make a note that you have done this.

Everyone loves free stuff, but keep your eyes on the prize. Make sure you are only swayed to make a purchase if the extra inventory reduces the eCPM to a price point you are interested in.

Similarly, check if the CTR (or other KPI) for the added value inventory is significantly worse than the paid-for inventory. If it is, then it’s not really a good deal for you. In this case, it’s not unreasonable to demand the value-added inventory be re-run so it achieves the same performance as your paid for inventory did.

Other names for Added Value (synonyms)

Recording the true price of inventory (sort of) 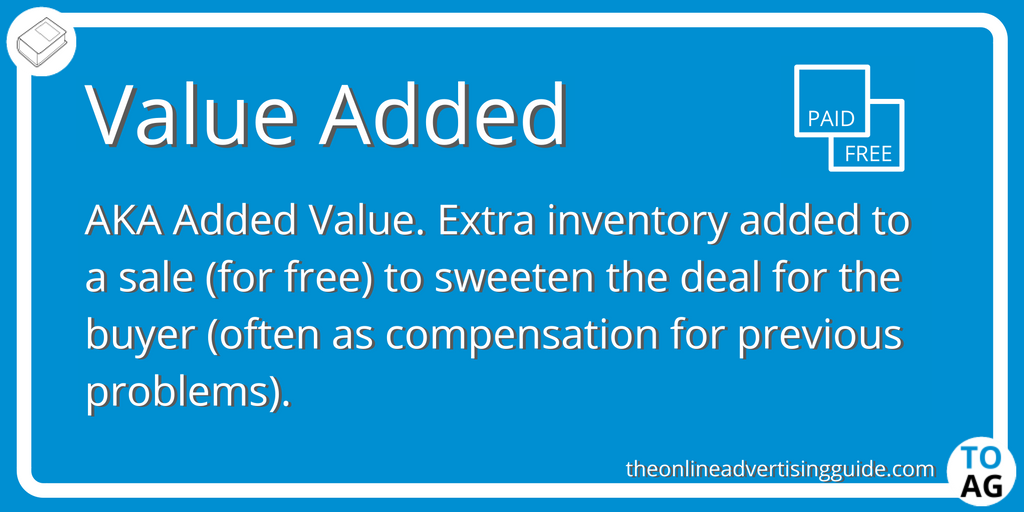