What is a Billboard?

Despite being designated a Rising Star in 2011, the 970×250 ad is pretty rare across the internet. Larger sites often use them to great effect as part of sponsorship deals.

They are intended however to go across the top of a site when it first loads, pushing down the content. Ad units which do this are referred to as “Pushdown Ads” and come in many sizes, but Billboards are the most common. Pushdown ad units are essentially a type of overlay.

Pushdown Billboard ads should be entirely closeable via a “Close X” button, leaving only a “Show Ad” button remaining that will expand again when clicked. This is up to the individual publisher, however. Alternately these ads often auto-close after 30 seconds instead.

Publishers often request that 970×250 ads have a 1-pixel black border around them to emphasise the fact that they are an advert. This is not common practice with other ad sizes. As Billboards appear where users would typically expect to see the logo of a site, this demarcation actually decreases bounce rates and reassures users.

This Billboard ad has pushed down the “Campaign” logo and menu below it down (they would usually be at the top of the screen. In this particular example:


The billboard dimensions are 970 x 250 pixels. Below is a live example of this ad unit.
Note: The live ad may not always load for technical reasons, and instead a backup image will show.

If you have a good sales and technical team (whether in-house or at your ad network), Billboard ads can be a great money generator. This, of course, means that they are generally only very useful for larger sites.

A sales team is needed as this ad unit should only be sold for a high CPM or CPD. It is quite an invasive ad unit that should generate good results, and so is worth more than smaller/simpler ads.

A good technical team is needed as Billboards push down the top of a site. This high level of complexity creates a high likelihood of problems arising. Due to this, it’s extra important to get ad tags or assets a few days earlier for testing.

Billboards are generally used as part of sponsorships or homepage takeovers, as they are a high impact unit. Due to this, they should generally only be used on one page of a site at a time (ie the homepage), or at least have a 1/24 frequency cap in place. This is in order to not annoy users.

If you are considering adding more complicated (and expensive) ad units to your site, this is quite a good option. Although not incredibly common, it is one of the more prevalent non-standard ad sizes and so more advertisers will be comfortable buying them.

Note: As it is a very large ad size, they are only available on desktop screens. This means they are not a good option for websites that get most of their traffic from mobile devices.

Billboard ad units are estimated to only be on about 2% of sites, so this is not usually an ad unit that makes sense for large scale purchases. It is however often used by large and high-quality sites, so can be worth the investment if you are able to create a great ad.

They are also often very expensive – with CPMs hitting between £15-£30. However, the stats for it are pretty great compared to IAB Standard Ads:

Therefore if you have an excellent creative team or agency and deep pockets it can be a good investment. They work especially well as part of sponsorship or homepage takeover deals. 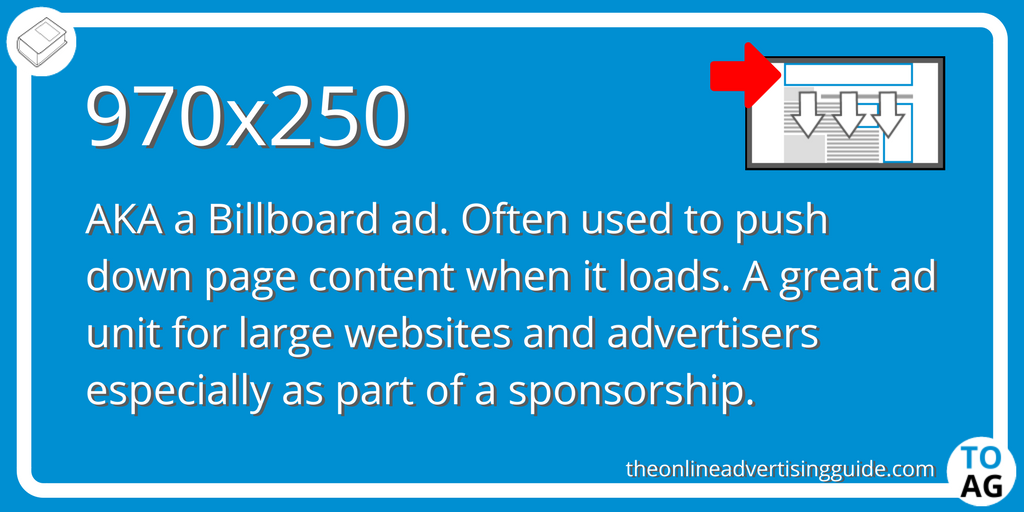