This ad size is confusingly called a banner, which likely stems from it being one of the first ad units, and therefore the show pony of “banner advertising”.

This ad unit was previously generally placed at the top of a page, in the spot currently occupied by leaderboards. It is often used twice on a page, with two banner ads appearing side by side to span the width of the page.

The unit was retired because of its consistently bad performance (due to being too small), yet still remains used somewhat frequently so should not be ignored. It is now most commonly served through a multi-size ad slot with a 728×90 ad unit.

The banner dimensions are 468 x 60 pixels. Below is a live example of this ad unit.
Note: The live ad may not always load for technical reasons, and instead a backup image will show.

A 468×60 is one of the lowest-performing and paying ad units available, so it is not recommended.

Tip: As much of the advertising industry still creates these units as standard, it should be not be ignored altogether. Place a 468×60 on the bottom of each page for incremental revenue.

The 468×60 as a unit generally performs comparatively badly, so it is not recommended.

Due to the small area of the ad, you should only ever create them when you have a very simple message that can fit the space.

Many older small sites will still have these ad slots available as their main advertising slots, so occasionally you will have no choice but to use them.

Tip: If you can buy inventory cheaply for the 468×60, and have one available for use then it might be worthwhile, but watch your ROI. 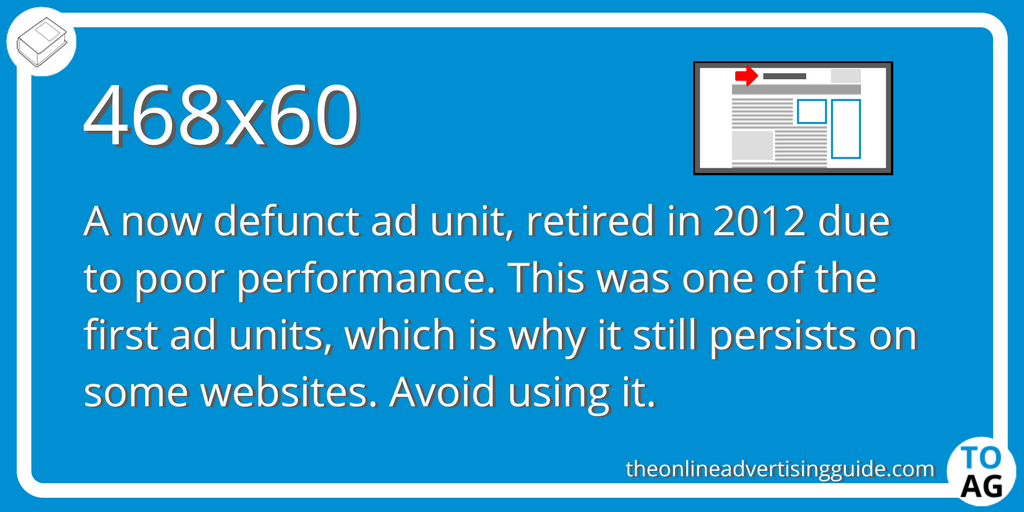