The 320×480 ad unit is a mobile ad with dimensions of 320 pixels wide by 480 pixels tall. This ad size is known as a Mobile Interstitial.

This ad size is intended to be a full-screen ad on smartphones. Interstitial technically means an ad that appears between two pages. This means that when you click a link instead of the next page loading, this ad loads. However interstitial is generally used interchangeably with overlay (or floater) to simply mean an ad that loads on top of content (but within the same browser window). Most of the time when you see this ad, it will be as an overlay instead of a true interstitial.

Fun Fact: 320×480 was adopted as the mobile interstitial as it was the screen size of iPhone 1, 3G, and 3Gs. The ad size should have been updated as screen sizes grew, however, it persists. This is in large part due to the fact that 320×480 is still the default setting in many places (such as Google Ad Exchange) when people are trying to build mobile interstitial ads.

The mobile interstitial dimensions are 320 x 480 pixels. Below is a live example of this ad unit.
Note: The live ad may not always load for technical reasons, and instead a backup image will show. As AdSense runs this as a multi-size ad unit, it will also sometimes load a 290×410 or 240×480 inside the space.

Like so many out-of-date ad sizes, the 320×480 continues to be used a surprising amount. Therefore if you get a lot of website visitors via mobile, you should consider running this interstitial mobile ad.

However, as with all overlay ads, you should limit the number of times any user sees this type of ad. This is because they are generally considered very annoying. The more each user sees an annoying ad type like this, the less likely they are to return to your site. This means they are probably only worthwhile if you have a huge user base. If you have a small site, it’s probably not worth annoying your users with this ad type as you should be focused on growth.

If you are using AdSense a frequency cap happens automatically. For other ad networks, you should probably consider a 1/24 frequency cap.

320×480 is a good ad size if you can find a site that serves it. This is because they are larger than the most successful ad unit – the 300×250. The general rule of thumb is the larger the ad size, the better the performance.

They are also better designed to fit a mobile screen and as they are an overlay will generally perform well. Make sure to include an easy to use close button, as accidental clicks from badly designed ads aren’t really worth anything to advertisers. 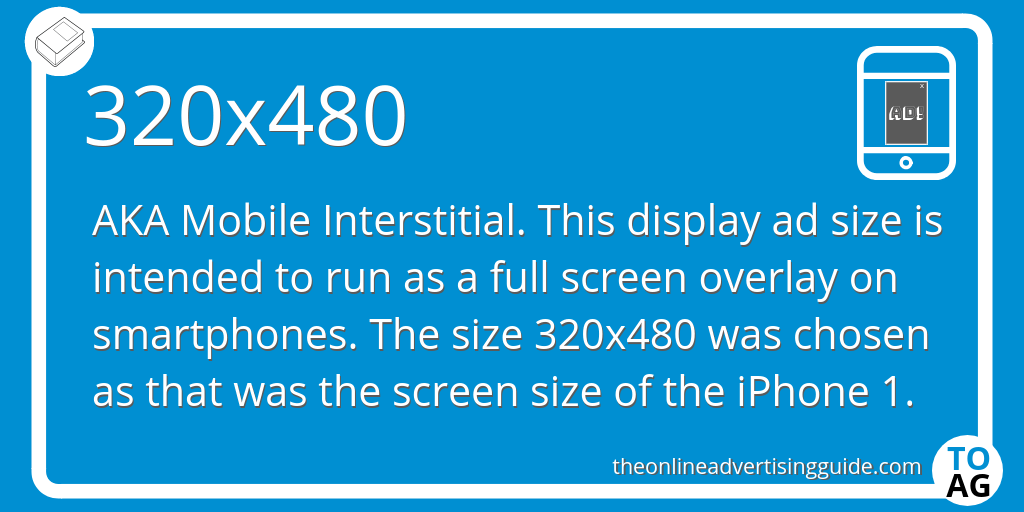