MPUs are the most popular ad unit in online advertising. This is because they typically perform best for advertisers, and therefore earn the most for websites.

300x250s are also highly versatile, being one of the only ad units to look good on both desktop and mobile phone screens. Because of this great performance and versatility you see them all over the web, which increases advertisers willingness to invest in them.

This is a real ad. It will refresh every 30 seconds.

Note: The live ad may not always load for technical reasons, and instead a backup image will show. It will not show on mobile.

Here are some examples of MPUs running on real websites. There is an example of each of the most commonly used placements.

At the top of the right-hand column:

At the top of the left-hand column: 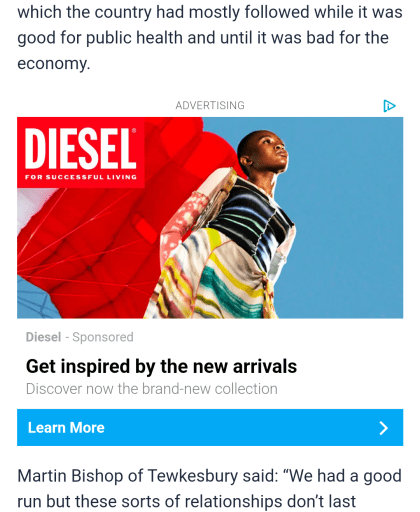 What does MPU mean?

MPU is an acronym, but an odd one as it has a different meaning depending on who you ask. The most common answer nowadays is ‘Mid Page Unit’ but this was not always the case.

Unfortunately, the original meaning of MPU is a mystery lost to the ages!

However, the different meanings of the acronym each reveal different things about this ad size, and so they are still useful to know:

Mid Page Unit (or very occasionally ‘Mid Position Unit’) is the one you will hear most often. It is called this because MPUs are often used in the middle of long articles – you scroll down and it breaks up the text.

This increases the value of having one long page instead of lots of shorter pages. Ads used like this will make/cost less money than their above the fold counterparts.

Multi-Purpose Unit is the second most common explanation of this acronym. It is probably the most accurate, as MPUs are used in so many ways (as opposed to other ad sizes which tend to have only one or two uses).

Message Plus Unit is a rare explanation of this acronym, but one which still comes up. The idea behind it is that an MPU can deliver a message, plus something more.

As with ‘Multi-Purpose Unit’, it is simply referring to how useful the MPU size and shape is to launch other units or to contain videos.

Ads perform better when they are above the fold. This means that they are visible onscreen when a webpage first loads.

Above the fold is the best position for 300x250s (and all ads) as people will often not scroll down a webpage. By having the 300×250 immediately onscreen it gives this ad unit the most chance of being noticed and engaged with by users.

The more frequently an ad is interacted with (and that interaction leads to more valuable goals such as sales), the more valuable that ad is.

The fact that an MPU can appear entirely onscreen makes it’s above the fold placements especially valuable. 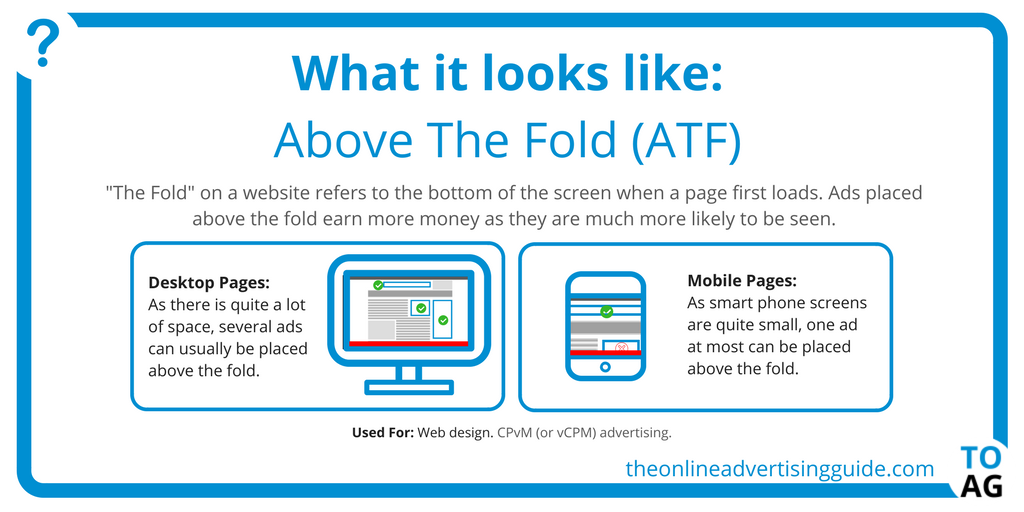 An above the fold MPU should ideally be placed in the same position on every page. By doing this it makes them more valuable to advertisers – as then they can then plan how an ad will look on a site. This is especially true when 300x250s are run as part of a Roadblock or Homepage Takeover.

If you were to only have one ad size on your site, it should be an MPU. This is because you can generally expect the highest RPM for this ad unit (followed by the 728×90), especially if you position it above the fold.

MPUs are widely used and perform well. The fact that so many advertisers use them drives up competition for them and makes them the most essential display advertising size.

They are also exceptionally useful as they will fit in so many places on a website. This means that your design does not have to suffer to accommodate them. In fact, quite the opposite – if you have a long page with no images then an MPU can be used to break up the text and make it more readable.

If you do use a 300×250 within content, make sure to not place them too often. Once every three or four mobile screen heights is ideal. You should also ensure that they only load when on-screen (or almost on screen) so that they don’t slow down your page too much.

It should also be noted that this ad unit is often used as part of sponsorships, which are the most valuable type of display advertising.

It can be tempting to place several MPUs on a single page, however, only the topmost placement on any page will command a very high CPM.

If you do put multiple MPUs on a page, make sure you are able to differentiate between them when placing ads so that you can sell guaranteed above the fold placements at a higher rate.

As this unit is so common across the internet, it can be used in both high and low performance placements on the same website.

These placements will not perform the same (the first will perform the best). Therefore when buying MPUs check if you can choose ad placement as well as the website they run on.

Also, if there are many 300×250’s on the same page make sure that you’re not paying for several of them at the same time (unless that’s your goal of course). Showing your ad 10 times to one person on one page is not nearly as valuable as showing it to ten different people once. 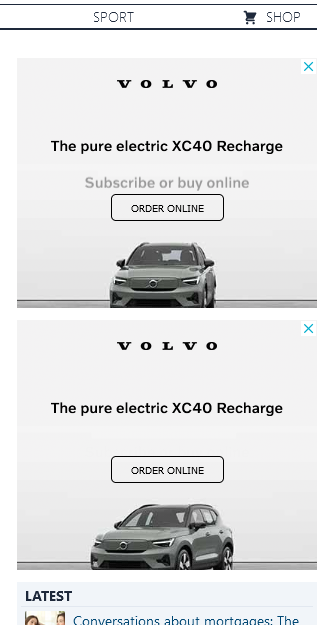 This repetition was probably not intentional

MPUs take up 75,000 pixels of space. This makes them marginally larger than the second most popular ad unit the 728×90 (at 65,520 pixels). They are the second smallest display ad size (out of the 5 most popular ones).

While display ad units generally perform better the larger they are, the MPU bucks this trend and generally outperforms its larger counterparts. 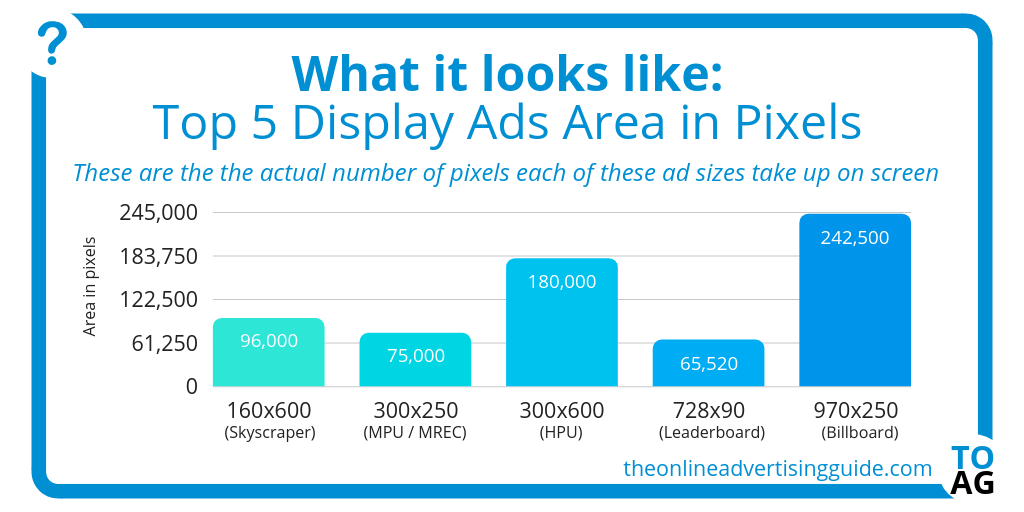 MPUs are commonly placed above the fold, meaning that they can be viewed as soon as a page loads. This can either be in the margin of a page or within the content.

MPUs can be used for many purposes and can be used to spawn other ad units. For example, if there is a page with an MPU on it, it can be easier technically to launch an overlay from the MPU than directly from the webpage.

MPUs are often used as part of a multi-sized ad slot with a 300×600 ad unit. When this occurs there needs to be blank space underneath the 300×250 space for the larger ad size to load.

This means it should be the bottom-most unit in the margin. 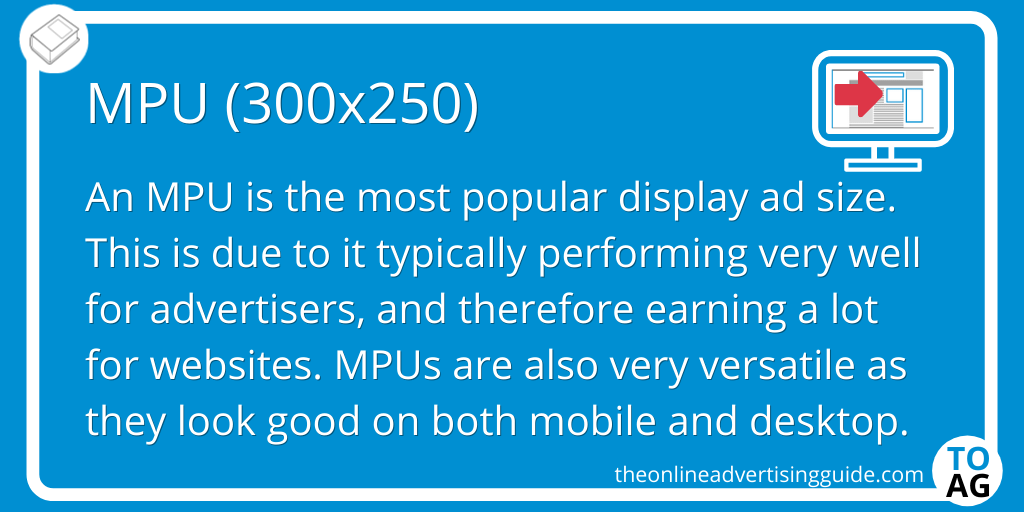