The 160×600 ad size is an IAB standard ad unit with dimensions of 160 pixels wide by 600 pixels tall. This ad size is known as a skyscraper ad, a super skyscraper or sometimes a wide skyscraper.

The 160×600 ad size is generally placed on the side of a page, so as to show users an ad as they scroll down the page. This makes skyscrapers (of both types) somewhat immune to demands for above the fold placements.

The 160×600 was brought in to replace the old 120×600 skyscraper ad unit because of it’s consistently better performance (due to being very large compared with the 120×600). The 120×600 however still remains somewhat frequently in use so should not be ignored.

The super skyscraper dimensions are 160 x 600 pixels. Below is a live example of this ad unit.
Note: The live ad may not always load for technical reasons, and instead a backup image or 120×600 will show.

If placed aligned with a 300×250 along the right side of a webpage, this ad unit can make up part of a homepage takeover.

This ad slot is often difficult to fill (whether using a 120×600 or 160×600) due to lack of demand, so having both options available is the best choice.

We would recommend using when building your own advertising. It will not always be your best performer, however, it does pretty well usually.

Salespeople will often try and convince ad buyers that this unit is good because it remains on a user’s page for longer, however, it is not better than a 728×90 or 300×250 in most cases. 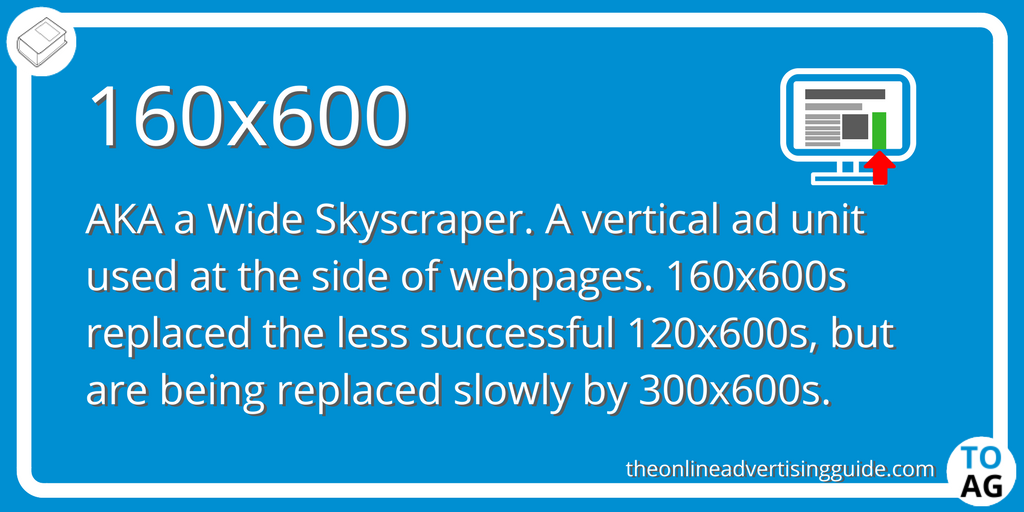