One of the most common questions I get asked is why RPMs often turn out to be lower than CPMs. In many circles, RPM and CPM are used interchangeably so this has understandably led to abject horror when someone discovers that the RPM they are paid for hosting ads is less than the CPM that the advertiser paid to get ads onto their site.

No-one is being ripped off and nothing underhand is happening. The truth is that RPM and CPM are in fact different ideas. They are just used interchangeably because advertising people talk about CPM a lot and so forget that there is another side to the equation.

This has led to CPM being used to mean RPM, but that is incorrect. There in fact are lots of reasons why CPMs and RPMs can get knocked out of sync.

Before I explore them all, let’s take a quick step back to look at the differences between RPMs and CPMs. We can then celebrate our newfound understanding with an easily digestible infographic at the end, which will make everything as clear as can be.

What Does CPM Mean?

CPM stands for Cost Per Thousand. The M is commonly thought to stand for mille which is the French word for 1,000 (although I have a bad feeling that is something I made up). It could also just be M – as that is the Roman numeral for 1,000. Weirdly, no-one knows for sure.

The word cost is used because this ad pricing model is from the advertiser’s point of view. Eg it was the answer to “How much do these ads cost?”. [Use this CPM calculator to work out your Cost Per Thousand]

Before jumping into what RPM means, you should know that CPM is also a metric. The average CPM of multiple campaigns can be used to work out how much any set of 1,000 ad impressions cost. For example, if an advertiser had a CPC and a CPA campaign running, they might want to convert the two different ad models into one comparable price to see which is the most cost-effective.

For this comparison, CPM used to be the standard. Technically it would be the eCPM – Equivalent Cost Per Thousand or Effective Cost Per Thousand (again, weirdly no-one knows which is correct). Nowadays however it is more likely that CPA or ROAS is used to compare campaigns from an advertisers point of view.

What Does RPM Mean?

RPM stands for Revenue Per Thousand. Again the M is commonly thought to stand for mille (the French word for 1,000), or M as in the Roman numeral for 1,000. It just means how much a website is being paid for 1,000 of something. As a measure, it is intentionally payee-centric and is not a payment model at all. [Use this RPM calculator to work out your Revenue Per Thousand]

Why does RPM exist at all? Well, the short answer is that eCPM sounded too confusing. The long answer is that ad networks have made the idea of websites having a direct relationship with advertisers obsolete. Whereas websites originally had to go out and sell ad space directly to advertisers – and agree a set pricing structure between them – that has not been the case for the vast majority of sites for a long time. Nowadays if you want to earn money from advertising you join an ad network, and they do all the selling for you.

Whether an ad network sells your ad space using an RTB auction or by using a real-life sales team, the one thing that is sure is that they won’t be selling all of your ad inventory on a flat rate CPM basis. They will be making a variety of deals at different price levels, getting as much for your ad inventory as possible.

What has this got to do with RPM? Well, this plethora of deals at different prices is confusing and impractical to report on. It makes life much easier for website owners if they are just told the amount of money they will receive overall. And it makes even more sense if revenue is presented in a way that is directly comparable to other time periods.

Page views and therefore ad inventory fluctuate after all, and so earning £10,000 from 500 page views isn’t the same as earning it from 10,000 page views.

With Page RPM it doesn’t matter how many page views you receive in a month. You can compare the amount you receive per page view (or more specifically, per 1,000 page views). This makes it simple to judge whether your ad network is doing better or worse for you on an ongoing basis. 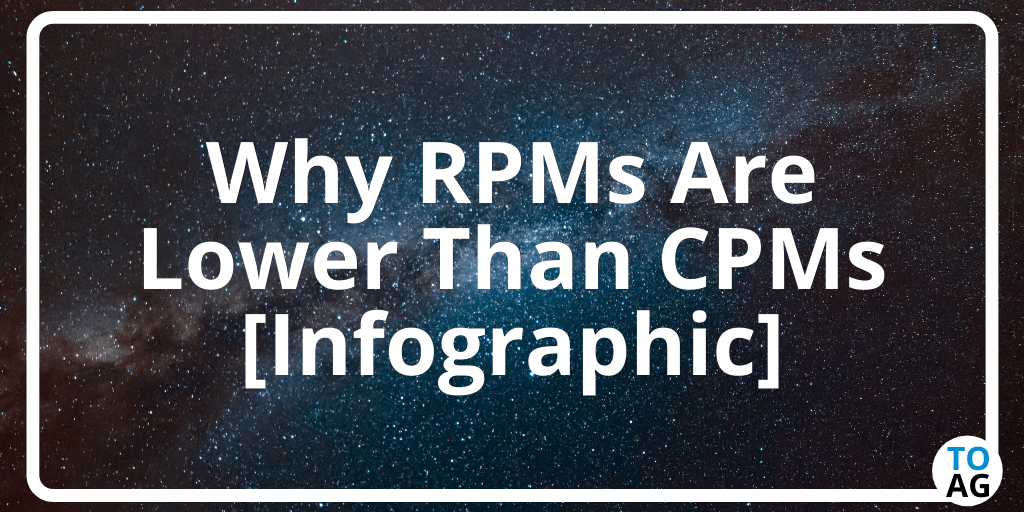 CPMs and RPMs Are Different

1. They Can Be Talking About Different Things.

As mentioned above, CPMs are almost always talking about ad impressions, but RPMs can be talking about Page Views, Sessions, or Users. Which RPM is being used is generally specified, but when it’s not this can lead to confusion.

If an RPM is not an Impression RPM, you will see an RPM which is higher than the corresponding CPM. This is because there are many ad impressions per page view, session or user (in almost all cases). This would lead to an RPM being higher than a CPM, which is literally the opposite of what this article is about, but worth mentioning anyway.

Solution: Always check which RPM is being used if it isn’t specified.

2. Not All Impressions Are Being Counted

Ad Networks do a lot of shady stuff, but the one which annoys me most is when they try to create their own definition of a standard term (I’m looking at you Facebook Ads). A common stunt they try to pull is to not count all ad impressions for one reason or another, and then use a term like “monetized ad impressions” or “fulfilled ad impressions” in their T&Cs to get away with it.

Two common(ish) ways this happens are:

Solution: Always look at the Page RPM as your main measure and ignore any other metrics.

Ad Networks are businesses that want to encourage customer loyalty like any other business. The way they often do this is to offer a 15% discount to Ad Agencies. Ad Agencies represent many advertisers after all, so getting one to prefer booking with you is an easy way to earn lots of money.

An example of how it works is: an advertiser agrees to pay $10 CPM to go on a website. The agency books that deal with the ad network. Because ad serving algorithms take price into account (and higher-paid ads get better ad placements), the deal is booked into the system as a $10 CPM.

However, the Ad Network pays the Ad Agency 15% of the cost of that deal back. The Ad Network are unlikely to swallow that cost, so they generally pass that 15% cost back to the website. This turns a $10 CPM deal into an $8.50 Impression RPM deal (while also making actual $10 CPM deals less successful as they have to compete with this one).

Solution: This only really happens with Ad Networks with a sales team who need to use discounts to make sales. This sort of Ad Network usually pays out much higher rates than an automated ad platform, so it should even out. However, if they aren’t paying out a page RPM that you are happy with, move to another ad network as they are profiting at your expense.

4. RPM Is Only An Estimate Until Payout

Advertisers (especially larger ones) will delay paying for ad space as long as possible. This is not only for accounting reasons but also because they need time to verify results. This sounds suspicious, but attribution is one of the biggest issues in marketing, and it still has no clear cut solution.

As a quick example – imagine someone clicks on an ad on your website but doesn’t make a purchase and closes the page. However, they see the same ad on another website and change their mind and so click and make a purchase. Because of the way conversion pixels work, both your website and the other website will record that the ad on their site made a sale. The advertiser, however, is not going to pay both for the same sale, and so they have to go through a process called de-duping. After they have decided who gets paid they tell the ad networks, who up until this point will have been making best guesses at results.

This leads to this situation where an ad network wants to report revenue as soon as possible but doesn’t actually know what it will be paying out. This can lead to the average CPM being reported as high at the time an ad ran, but when the payout actually occurs the RPM is significantly lower.

Solution: If your ad network reports average CPMs, ignore it. Look at the revenue and RPM at the time of payout only.

5. CPMs Pay For More Than Just Your Ad Space

Even if both the CPM and RPM are referring to the ad impressions, and there are no shenanigans or payment delays going on, RPM and CPM will still be different. This is because CPMs don’t only pay for advertising space.

When an advertiser buys ad space, they also have a whole set of other associated costs. I don’t even mean making and planning an ad, I mean from when the ads are ready to when they appear on a site there are bills to pay. These bills are paid by the advertiser, but reduce the amount the website receives.

Whatever is leftover goes to the website and will count towards the RPM.

While the other reasons for CPM/RPM discrepancies listed above only occur some of the time, this reason occurs every time.

Solution: There isn’t one, this is just how it works.

Why RPMs are lower than CPMs Infographic

Without further ado, here is the above information condensed into a helpful infographic. Feel free to share it. 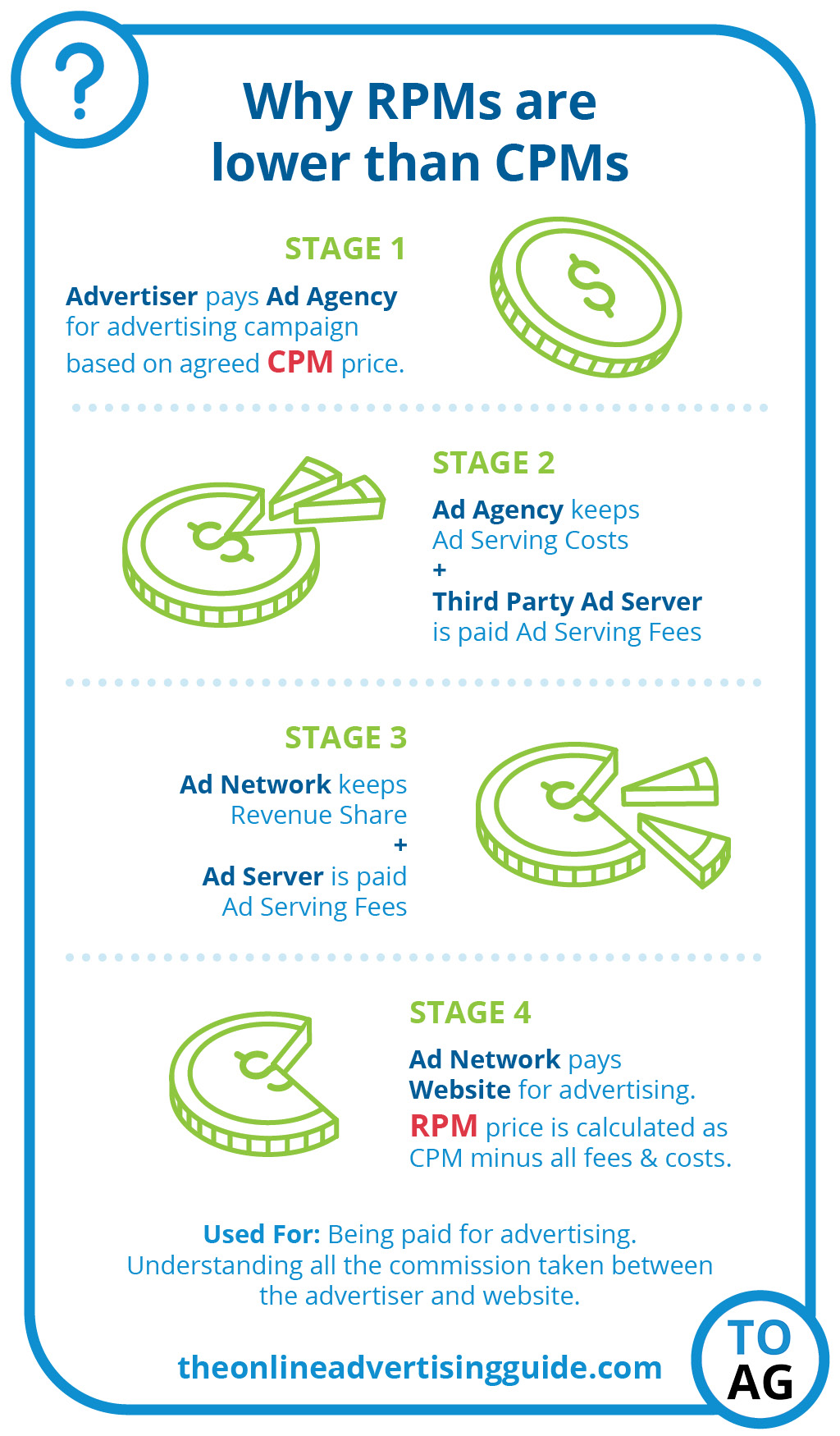