Many people say that a social network is simply any platform where people get together online to discuss things – and on the surface, this feels broadly right. However, due to this definition, most people (and companies) also classify messaging apps (such as WhatsApp) as social media too. To me, this is a step too far.

Messaging apps are used to talk to people you know in a private online space. They’re used to socialise in a digital format – to have an actual conversation of sorts, like in an email or on a phone call. What they’re not used for is social networking.

I know that social networking kind of feels like socializing, but then again when you really think about it… does it really? Whereas socialising is heartwarming, laughing, empathising, rabble-rousing, hugging, talking, hand-shaking fun – social networking is, well, sterile. Click-click-clickety-click.

They’re just fundamentally not the same. This is the key to understanding social networking – It isn’t socializing but is, in fact, a totally different way to communicate. Therefore social networks aren’t platforms to socialise on, but to do something different. Something more clickety-clicky.

Once you have accepted that idea, I think understanding what a social network is becomes much easier. I also think social networking becomes a lot less frustrating when it stops being just a disappointing form of socializing and starts to be its own thing entirely. 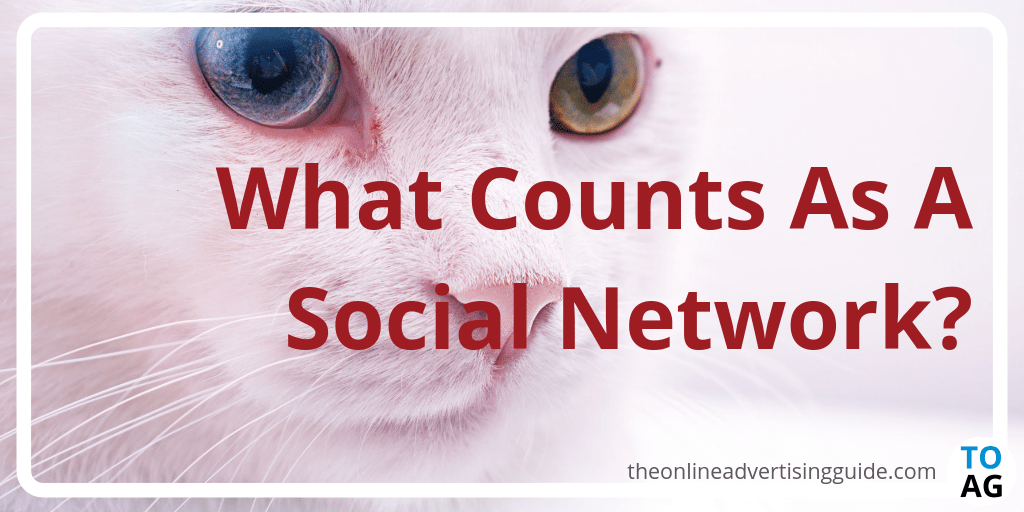 What Is A Social Network?

I don’t think we should trust media companies to define themselves, as they talk even more nonsense than advertising companies. With this in mind, we can’t just accept that a company is a social network just because it says so.

So after recently taking a deep dive into what the current top social networks are, it made me think about what criteria make them a social network to start with. I came up with this list. In my opinion, a social network is defined by the following five properties:

While there are many other things which also help to define social networks, without these five components I don’t think they count as social networks at all. Let me explain…

1. An Audience for Everyone

One of the defining features of social media is that when you post or comment, you are generally talking to an entire network of people all at once. Even when you tag someone in a post or comment, others can usually see it and respond.

This is because while most social networks offer some sort of private messaging option, that is not the main purpose of the service. Facebook even spun off its messenger service into a separate app to really drive home the fact that private messaging is just that – private.

Posts and comments (mostly) being public (with it being fine for anyone who reads them to respond) is TOTALLY different to normal social interactions – and is a key part of social networking. While other people might overhear you when you talk to someone you know in public, you wouldn’t expect strangers to casually chime in with their own thoughts and opinions on your conversation.

Therefore I consider it a core component of social networking that most communication happens publicly. They’re called posts (and not messages) for a reason – you post your content and anyone can wander by and have a look.

WhatsApp, Facebook Messenger, Line, Skype, Telegram, SnapChat, WeChat, or any service which is mainly about two people talking as a social network. Yes, many of these services include some way to display a public status, or making a group to talk to, but that’s not the point of them. They are one-on-one communication tools, and that necessarily means that they are not a public forum, and therefore not social networks.

Let me remind you of the other term used to describe social networks: social media. It’s not just the network itself which is social, but the content on the network too.

So every type of post on a social network should be available to any registered user. And yes – while there is now sponsored content and ads on most social networks, these two types of content can also generally be bought and posted by anyone.

This is an important point because sites like TripAdvisor are trying to re-position themselves as social networks. This sort of makes sense as people go on TripAdvisor in order to discuss travel plans. However, TripAdvisor generates most of its own content and its users are restricted to commenting on that content. While I do think the ability to provide public comments and feedback is a key mark of a social network, it isn’t the only mark.

No, I didn’t think so. A social network needs to have its content mostly generated by its users. If the ‘social network’ itself is generating the majority of content, then it isn’t as social as it thinks it is.

TripAdvisor, Amazon, Netflix, Spotify, iTunes, Google Play, Xbox Live, Playstation Network, IMDB, or any site which posts the majority of the content itself.

Also blogging platforms (Blogger, WordPress, Medium etc) as in those cases content is still being posted by one set of people, and then commented on by another set – and monologuing is kind of the opposite of social networking.

A key part of all social networks is that they all want you to say whether or not you like their content. This feedback loop is essential for the social networks themselves and their ability to command your attention. You post, someone comments or reacts, and you feel good about having posted in the first place. It’s a simple system – for you anyway.

For the social networks – it’s incredibly complicated under the hood. Most social networks have some sort of feed where all posts are shown in roughly chronological order. However, almost no social networks opt for an actual simple timeline of posts because showing people algorithmically chosen interesting posts and comments has proven to create a much more captive audience.

While it is incredibly annoying to many users (including me), timelines died for business reasons. This means they are very unlikely to come back, unfortunately. It also means that social networks are now defined by how well their feed algorithms work.

Whether or not you feel like a specific social network is interesting depends on how well their algorithm performs. And those algorithms are fed by our judgemental tendencies – it’s a feedback loop we’ll never escape.

So while it is annoying, it (technically) works and is now fundamental to the experience of social networking.

Actually I haven’t excluded anything because of this one, as the ability to pass judgement on web content is pretty much universal at this point. I’ve probably ‘liked’ about 500 things today already.

5. Making Friends Across The World

Another key element of social networks is that they shouldn’t be regional. If you have a friend in another country then you should be able to socialize with them online on your platform of choice.

Of course, some countries restrict access to different sites, and I don’t think that should be held against the sites themselves. If a social network wants to be international but falls afoul of authoritarian censorship then that is certainly not the fault of the social network.

Why I think this is important is that if a social network is only available in one language, then that stops it being a means of social networking and becomes something more akin to a local service.

I’ll put it this way – it’s like the difference between an email and a poster.

A social network is a website or app where you can build or join a community of people from anywhere in the world. The people you interact with can be real-life friends, or not – it doesn’t matter. Through a social network you can communicate anything you like and anyone can reply to you, or just be judgemental about what you said.

On most social networks you can see a feed of all the posts you want to see (mixed with ads), but unfortunately, you can almost never see them strictly chronologically – because social media is big business, and timelines somehow cost them money.

Most importantly; social networking is not socializing – and that doesn’t make it bad, just different.