Skip to content
Home » Early Train Blog » What Do You Actually Get From A Social Media Engagement Campaign?
Get Our Free Monthly Digital Marketing Roundup Email

Engagement is the currency of social networks.

Social media algorithms show your content to people who they think will engage with it because each engagement creates a little connection between you and the platform. So buying engagements from a social network is playing their game – you are paying for the thing they consider valuable.

But what actually counts as an “engagement” on social media and what is a social media engagement campaign for? Broadly speaking, an engagement means any user interaction but more specifically… it depends. Each social network has its own list of engagements that they include in this metric. So when you run ads to get engagements – what are you actually paying for?

In a way, you are buying the social networks love. But in a much more accurate way, you are paying for a specific set of interactions with your content. Let’s take a look at what counts as an engagement for each social media platform and if you should actually pay for these things.

A Quick Aside – How You Calculate CPE

If you are buying engagements from a social media ad platform, then you are paying for each engagement you receive. This is called a CPE campaign – CPE stands for Cost Per Engagement. Calculating CPE involves an incredibly simple formula: 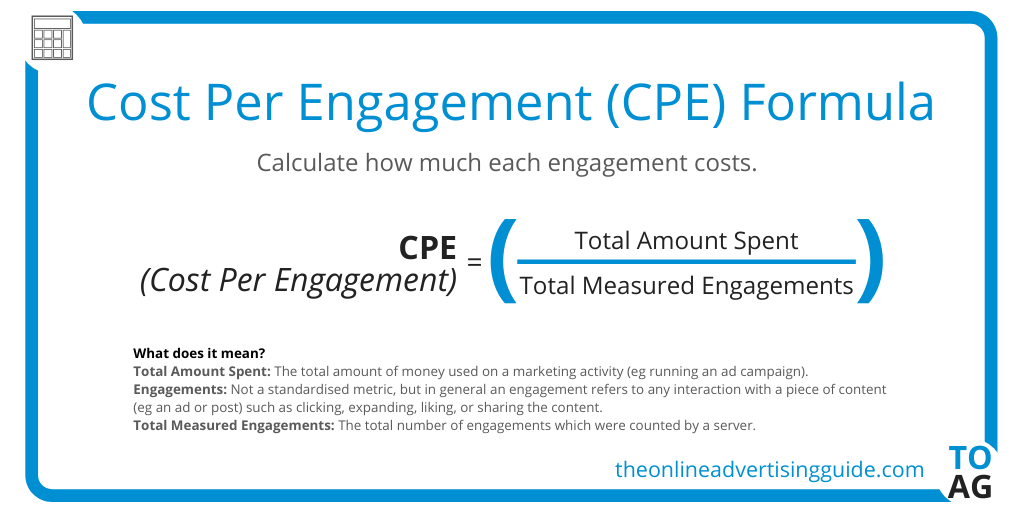 It’s worth knowing this just because in some social media platforms the term CPE will be used in their analytics. On Facebook Ads you can also see this result under Cost Per Result.

What Is A “Consideration” Campaign?

When you are setting up a campaign on Facebook you’ll see this screen with the campaign objective “Engagement” coming under “Consideration”: 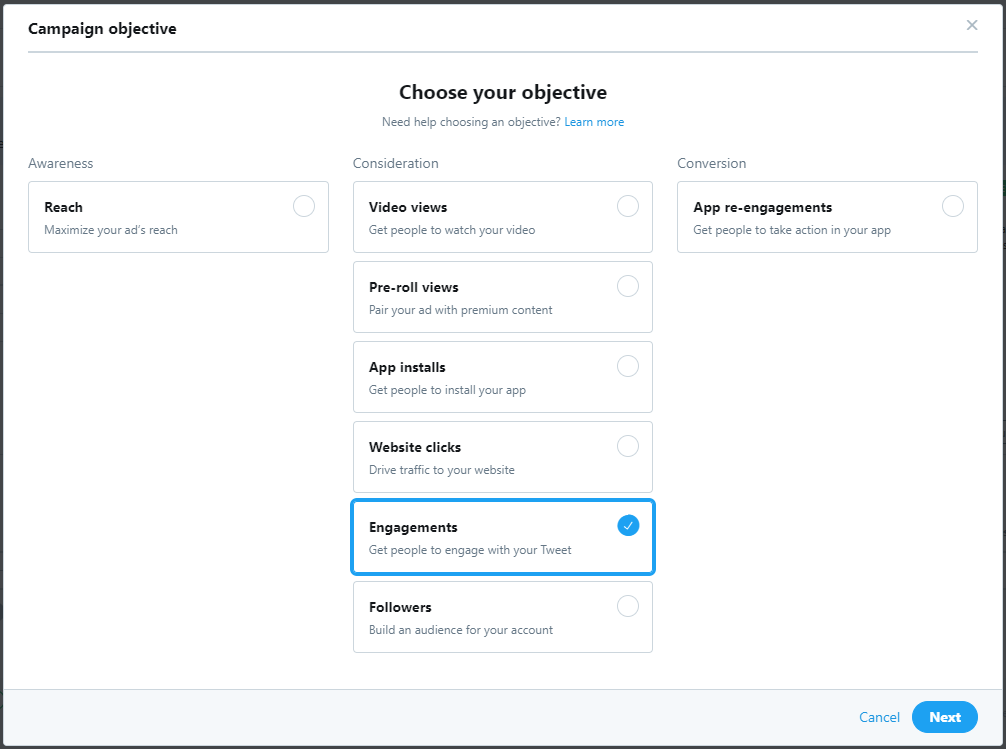 All the major Social Media platforms now try to categorise ad campaigns in three ways: “Awareness”, “Consideration”, and “Conversion”. This is their attempt at describing a marketing funnel in a simple user-friendly way.

Another Aside – What’s A Marketing Funnel?

These three stages are often thought of as a funnel – as lots of people are aware of most businesses, but only a few people buy from them. The complete marketing funnel is typically considered to be a little longer than just these three stages: 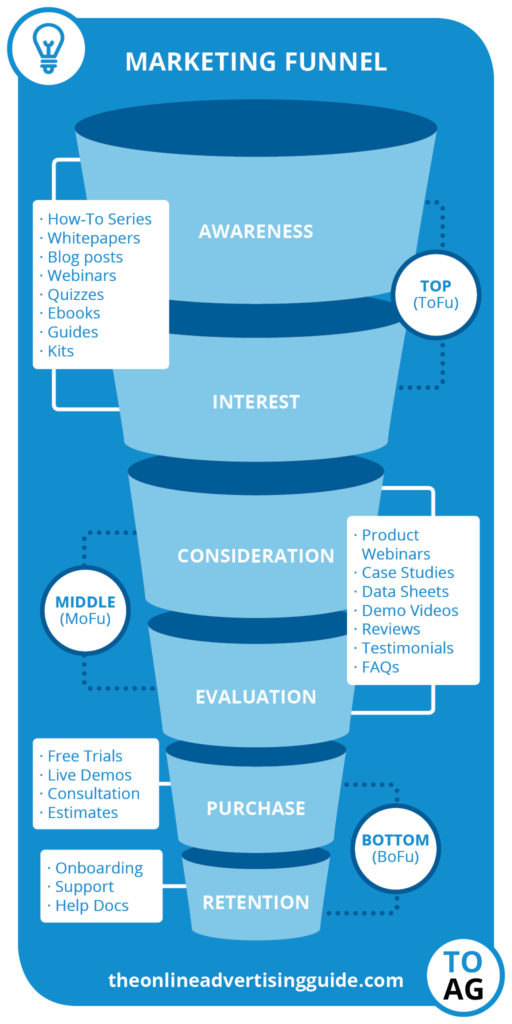 So why is engagement considered part of the “Consideration” phase, and why is that phase important? Well, it’s because there is a big mental gap between knowing about something (awareness) and it being part of your life.

Think of it this way – imagine you work in an office with two entrances. You always take whichever one is convenient, but then one day you have an office-wide conversation about which entrance is better for some reason. Everyone agrees one entrance is much better, and so the worse entrance gets renovated – and a suggestion you made gets used when deciding what it will be like.

This is the power of the “Consideration” phase. It takes you from knowing something exists to feeling that it matters. It’s the same with engagement on social media – it breaks the invisible barrier in your brain between knowing about something and caring (in any way) about something.

The difference may seem small but it’s a connection that is invaluable if you are going to actually get someone to convert into a customer. You can’t decide to do something if you never even think about it after all.

Are Engagements Worth Money?

So now you know that getting people to engage with your content is an important step in social media marketing. The next question is – should you pay for engagements? In an ideal world no – your organic posts would be so amazing that they would gather all the engagements they needed.

In reality though not every great post is going to go viral. You are constrained by the number of followers/likes your page has, and so if you want to engage with a wider audience you are very likely going to have to pay for that privilege.

This is what makes engagement campaigns valuable.

By running ads to gather engagement you are first and foremost creating personal connections with people and pushing them down the marketing funnel. You are also teaching social media algorithms that different types of people are likely to engage with your content if they are given a chance.

To be clear – the algorithm for social media ads and organic posts are probably quite similar and so they will both naturally seek out the same types of people to show your content to. However, with social media ads, you can set targeting and thereby hit users outside of your normal audience.

And of course, there is the multiplier of money. Depending on your budget and targeting, this will likely make a social media ad algorithm (at least slightly) more willing to experiment and test your content on new audiences just in case it can save (itself) some time and money.

Even if the social media algorithm doesn’t learn to send your organic posts further and wider than before because of your ads – *you* can still learn. You can look at your reports to see what types of people have engaged and then target them with more advertising later.

So we’ve shown that engagements are (somewhat) helpful in pushing people towards converting, and buying them can make (some) sense. But what specifically is an engagement? In Display advertising, an engagement typically means *any* user interaction – including negatives like closing an ad or muting or pausing a video. On social media, things are a bit different.

What counts as an engagement on social media has (mostly) been narrowed down to just positive interactions. Each social network is a little bit different though, so here is an overview of how the biggest social networks measure engagement:

Facebook count every single positive interaction with a post or ad as an engagement, including reactions, shares, comments, and clicks (on links, videos and images). They don’t include negative interactions such as hiding or reporting posts, or unfollowing pages, however.

If you run an Engagement campaign on Facebook then these positive engagements are what you are paying for. All of this is good stuff in terms of engagement, and so if you are building consideration they are worthwhile. Clicks are probably the most valuable of these – but then if you want clicks run a CPC campaign instead.

[You can read Facebook’s own definition of Post Engagements here]

Instagram straight up pretends not to have an Engagement Rate, which I think is frankly ridiculous. However they are part of Facebook, and so if you run an Engagement campaign on Instagram you’ll be getting the same things.

So for ads, Instagram counts reactions, shares, comments, and clicks on links, videos and images as engagements. However, for posts, Instagram only (publicly) considers Likes + Comments + Saves as engagements. So if you want to work out the CPE of a post, then you should possible just use these three.

Again this is all valuable stuff in terms of consideration. Each of these will push more people to see your posts, or people to care more about your posts.

Twitter goes as broad as it can for engagements and includes all user interactions with Tweets. This means retweets, replies, follows, likes, and clicks anywhere on a Tweet (including to expand the tweet or on links, hashtags, or your profile).

They don’t include interactions with the three dots in the top corner of a Tweet, as that is pretty much all negative. All of these engagements do imply that people think you are a trustworthy source of information, but I personally don’t think Tweet expands have much inherent value, and clicks on hashtags are similarly not generally that useful to you.

You could, of course, fix this by not adding hashtags to the posts that you promote (which I highly recommend), and writing Tweets that don’t need expanding (although this is slightly pointless).

[You can read Twitter Ads own definition of Engagements here]

LinkedIn also goes broad for engagement, although it goes its own way for engagement rate (via a different sort of impression). For engagements though, LinkedIn just counts all clicks on posts as engagements. These clicks include link clicks, likes, comments, and shares. Also, bookmarks presumably, although I can’t find them listed.

One bonus from LinkedIn is that I think that (technically) if someone follows your page from an ad then that isn’t counted as an engagement for Cost Per Engagement ad purposes. They list followers from your ads a free extra in your reports anyway.

Again, these are all solid points of engagement, so if you are looking for consideration these are worth paying for.

[You can read LinkedIn Campaign Managers own definition of Engagements here]

YouTube is a freak of a social network in many ways (so much so that many consider it a search engine instead). It doesn’t break this odd streak when it comes to engagements either as it counts engagements in a very odd way. I suspect that this is because publicly their main metrics are views and subscribers, but their algorithms actually promote videos with higher engagement rates (which for them is engagements divided by views).

Their official count of engagements is all clicks as well as 10 seconds or more of a TrueView (their viewing counter). By all clicks, they actually mean subscribes, likes, dislikes, comments, and shares (not including embeds). That’s right – they count dislikes too apparently. I wouldn’t recommend paying for engagements on this social network – go for views or clicks.

[You can read YouTubes own definition of Engagements here]

As there are too many social networks to list here, you should generally just assume that any click on a post counts as an engagement. If they don’t provide you with an engagement metric and you are desperate to know then find the analytics section, and see what they list.

Analytics reports from social networks will usually include impressions, reach and/or views – so ignore those columns. Basically, add the rest together though – every click-based event is technically an engagement. If you want to exclude negative clicks (like unsubscribes etc) then that makes a lot of sense, although not every social network would agree.

As TikTok is cloning Facebook’s Ad Manager so closely I would expect them to copy how they measure engagement too. This trend might continue across all the smaller and new social networks as they grow.