It’s easy to get stuck in habits or mindsets, and that’s the through line on the three sets of questions this week.

One person runs a campaign with a huge amount of ad groups that has always worked – and then can’t understand when it stops working. Others want to advertise every holiday season because that’s what others do. And others can’t help but think about digital marketing in ways that are no longer exactly true.

You asked, I answered. 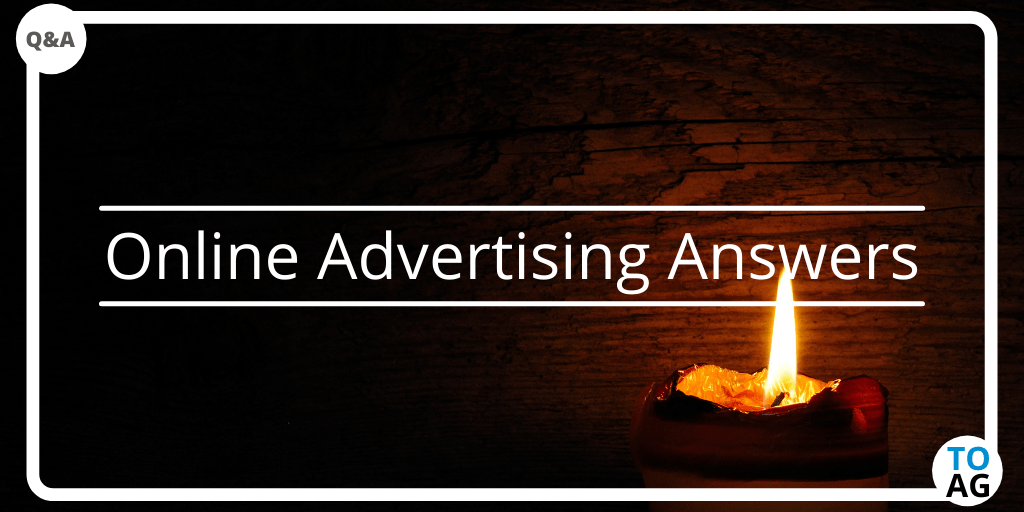 I have a search campaign with about 400 ad groups.

This was running fine for the last few years with a CTR of about 4%.

Since 10 days the CTR suddenly doubled to about 8% but there are very few conversions since then.
The clicks didn’t improve, just the CTR.

I did not make any changes to the campaign. Just added or paused a few low-value keywords

I can’t find any changes. Did Google change something on its algorithm?“

A: “If you have 400 ad groups in one campaign then that has the potential for huge variation in what you are spending on at any given time. You should check if the distribution of your ad spend changed dramatically over these past ten days. Maybe there is a sudden burst of interest in the keywords for an ad group that doesn’t work so well?

Similarly, have you looked in your search query reports? Maybe you’re spending on a search term that is far less relevant than before? With match types being loosened in recent years, new things might have crept into your targeting.

Equally, you should check if the percentage of searches that aren’t shown in your search query reports has increased. If that’s the case there is less you can do about it, but at least you would have some idea of the cause.

It could also to be to do with your responsive ads. Check the ones that are getting shown the most and see if maybe a new combo is dominant – but also misleading.

You also said that you’ve been running this way for a few years – maybe you’ve just used up your core audience so Google’s algorithm is looking elsewhere for clicks? I’m presuming you are running a CPA campaign and not a CPC campaign – but if it is a CPC campaign then you should switch.

Older campaigns often start to degrade if you don’t keep updating the creatives. So if you haven’t updated your creatives in a while, now is the time.

It could also be that the algorithm has started down a bad road and it can be hard to get them back on track. If it internally thinks that it’s found a rich vein of users to tap for you, it might not give up that idea even if they aren’t converting. If that is the case you have little choice but to start a new campaign. You could just copy it but that may lead to the same problems. As others have suggested, 400 ad groups in one campaign is a lot, so perhaps it’s time to break it down into smaller chunks so you can direct ad spend at good performance more directly.

There is also the outside chance that this could all just be a weird coincidence – like a competitor has started ranking more highly and their organic result seems to combine well with your ads. In this case, people could click on your ads but then realise you aren’t the same product/brand as the one they were looking at. You could test this by searching for your search queries with the combo of highest CTR and lowest Conversion Rate.

And of course, it might be that Google updated something and it’s broken your campaign for no particular reason. This is the worst option of all because the fix would be to wait it out – but for an unknown amount of time. So frankly I would ignore this despite it being the easiest thing to mentally blame it on.

“Tips for optimising for the holiday season?

This is a series of questions I was asked by Lit Extension as a Twitter chat.“

Q1. How important is digital ads optimization before the holiday season?

Reference the holidays in ads & look at best sellers from last year to change keywords/audiences & content.

Q2. A checklist of must-do activities before enabling your ad campaigns?

Before enabling a big ad campaign:

Q3. What are the steps to optimize ad campaigns?

I’ll explain each a bit below:

If something is performing great, break it out & give it an extra budget.

2) Broad Targeting
Let Facebook optimise for you. Run 6 ad sets with 10 ads in each. Use NO targeting.

Combo of 6 ad texts (one for each ad set) and 10 images. Each text & image should be testing something.

Performs great but you get no insight into which audience worked.

Skip 2 if a small audience.

This audience optimises itself, but you should manually optimise the ads.

Q4. What other elements of an ad campaign need to be checked out?

Some important things to check out on your ad campaigns are:

If you are showing your ads to the same people too often then you could be wasting money.

Consider a frequency cap to slow down/spread out delivery (3/24 is generally best).

For Paid Search ads you should check out the actual search terms that are triggering your ads at least once a week.

Optimise towards both by dividing your CTR by your CPC to make a new metric (VfM).

Q5. What kind of problems can happen when running ads (and what are the solutions)?

Here are some of the most common problems with ad campaigns:

There are 2 common causes:

– Running CPC campaigns but hoping for conversions. If you buy clicks you get clicks. Run a conversion campaign!
– Ad is good but doesn’t align with a landing page. Change landing page to build on promises made by the ad.

If an ad platform doesn’t think your ad will perform well (or be profitable to them), it simply won’t show it. Try to –

People get bored of anything. You can ‘use up’ an audience if you run the same ads for too long.

Pause & try a different campaign. If your old campaign was good enough switch it back on in 6 months until performance declines again.

Q6. What are some actions or tools to evaluate previous ad campaigns?

IMO the best ad campaign evaluation tool is a changelog on a spreadsheet.

Make a note of every change you make to a campaign & the date. Record the results from the week before the change & the week after.

It’s not glamorous or high-tech but it works.

Writing down what you did and then coming back and checking the results forces you to evaluate yourself. It also stops you from doing the same thing too often.

Learn what works for you.

Q7. Any special tips for holiday campaigns that people usually miss out on?

Advertising prices go up during the holiday season.

Either fully commit & make a holiday-specific ad campaign, or take a break from advertising.

There is no point in spending more money to get the same results.

A: “In my opinion, what makes digital advertising unique is that it’s so accessible to any advertiser.

So to me tracking for online advertising is a powerful reason why it’s good – but it doesn’t make it unique and it’s an advantage that is fading over time.

Other people may mention the fact it has an immediacy that offline channels do not. You can create an ad from scratch and have it running online in less than 30 minutes. This is simply not true of print, radio, outdoor or TV ads. Creatives for offline channels are generally much harder to create, and all of them have processes you have to get through to get campaigns running.

However, again – offline channels have been working on this problem so now many types of traditional media can deliver ads incredibly quickly. In many cases this has meant them adopting digital technology (like video screens in place of posters) – so you could argue that this is still digital advertising.

Another big reason some might cite is that online advertising is more targetable than offline channels. If you put a poster up you might be able to work out what type of people may see it, and then advertise that ad space based on that intel. But you can’t control who sees it. You can’t say “I want this poster to be shown to people who like my product”. With online targeting, it is incredibly easy to run ads on that granular basis.

But once more, the counterpoint is that offline targeting is becoming incredible. TV and Radio can both target based on very accurate demographics even if print can’t. So this is another advantage that will be chipped away with time.

So back to my own point – accessibility. With digital advertising, anyone can take part. You need a payment method and … that’s it. So many platforms have ways to advertise now, that anyone can boost a post on social media, run an ad on search engines, create a banner to go on almost any website, or generate a video ad for… well anywhere online. Making simple online ads is easy as is running simple online campaigns.

Of course, running great-performing ad campaigns takes talent, experience, and knowledge. But the bar for entry for getting ads online is rock bottom. And it shouldn’t be underestimated what a big deal that is. It means any organisation of any size can get more customers.

It also means there are no real gatekeepers to stop small businesses from success. Sure you have to follow platform rules, but even 20 years ago it would have been unthinkable for anyone but big companies to run ads at the scale that is now possible.

And not to make this all about me – but that’s why I started The Online Advertising Guide. Because about 20 years ago I was working in online advertising and I saw that despite the ability for anyone to advertise online, there was still gatekeeping happening through a disparity of knowledge. Big companies knew what they were doing so could do amazingly well through advertising. But small companies had no idea where to start, and so were being taken advantage of by the advertising industry which bombarded them with jargon so they couldn’t work it out themselves.

So I decided to explain all the jargon and explain simple strategies that make ads work. There are now hundreds of sites that do this and that’s a great thing in my opinion. Giving everyone the chance to succeed at online advertising keeps the big players on their toes and makes the internet more interesting by keeping more unique voices capable of competing.“