This November in Online Advertising Answers I talk about the difference between online advertising in the US and EU, how often *you* probably click on ads (it’s more than you think), and how to keep competition reasonable on Google Ads.

Get in touch with your digital marketing questions, and maybe you’ll see yourself (and my answer) featured here next month.

[Have a question about digital marketing? Ask me on Quora or email me at justin@theonlineadvertisingguide.com] 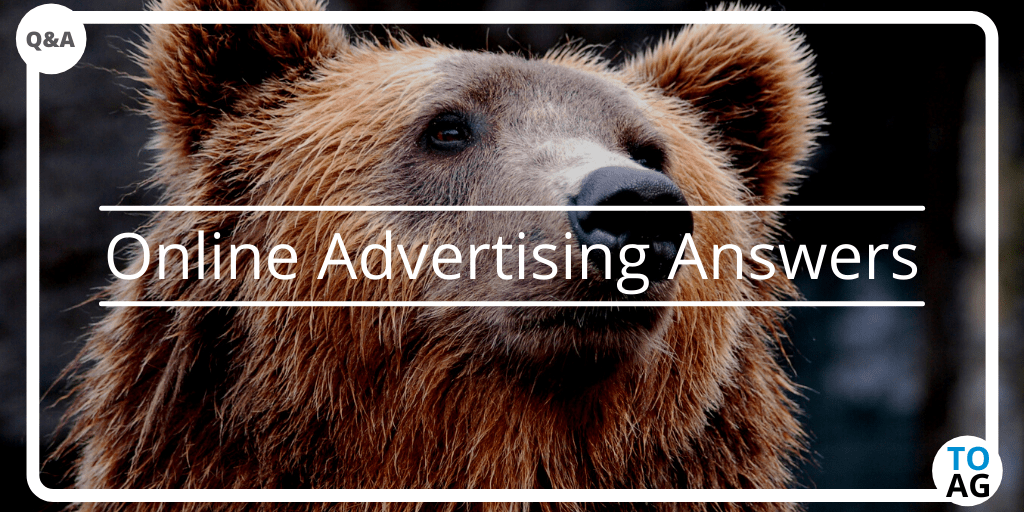 Q: “How is online advertising different between the US and EU?“

A: “Ignoring the creative style (as that’s not my expertise) for online advertising, it’s about scale. Across the US you can run a single campaign and the algorithms of whatever platform you use will be able to find a cheap and effective audience for you.

For the EU you’ve got a lot of small markets that need to be targeted pretty much individually. You can group them a bit by language, but mostly you need to localise campaigns for them to be effective. At the very least this means running separate campaigns in each country with multiple creatives so the algorithms can surface winners and losers (although it really should mean using local advertising experts if you’ve got the budget). These smaller audiences make advertising more expensive generally in the EU.

Because the US is such a large market and there is an easy audience for (almost) everyone, it also means the advertising ecosphere is underdeveloped. It’s not that the tech and expertise aren’t there, it’s just you don’t need it to succeed quite as much. So in the US, even big advertisers will often do things unthinkable elsewhere – like not having any form of tracking. This is because results are often barely affected, but they save some time and money with the setup.

In the UK it’s the opposite. There is limited audience size and a lot of competition, so it’s pretty unheard of for mid-to-large advertisers not having multiple bits of martech and extra agencies strapped to their campaigns for tracking and whatnot.

Targeting will often be a lot tighter in EU campaigns too. This is in large part because of the increased competition making great results harder to come by. But it’s also because if you have multiple campaigns from one advertiser then it’s harder for them to coexist without overlap.

The US also has this problem to some extent, but from what I’ve seen it’s more often solved by some sort of dynamic localisation – a place name being inserted into a generic ad to make it more relevant. This works in the UK too, but I don’t generally see it used so much.

Then there is the fact that audiences are used up faster in EU countries as they are smaller. By this I mean the majority have seen a campaign and performance is declining. This means that ad campaigns tend to not run for as long (unless they are super generic and for big brands). In the US I’ve seen online ad campaigns run for 3+ years with barely any changes made. In the UK I can’t imagine a campaign running that long without creative changes and frequent optimising.“

Q: “Do you click on internet ads? Do you buy the products in them?“

I occasionally click on internet ads and buy products. *Occasionally*. That’s the honest answer that almost everyone on the internet should give because we all fall for ads sometimes.

If we didn’t, there wouldn’t still be online ads everywhere you look. The internet is still mostly ad-funded because the system (mostly) works.
Most people say they never click on ads – but that simply isn’t the case for almost everyone. It certainly feels like it’s the case because everyone hates ads and tunes them out as much as possible (https://theonlineadvertisingguide.com/glossary/banner-blindness/). In reality, though, we all click on ads *sometimes* … and I can (kinda) prove it.

How many ads do I have to see before I want to buy something?

I’m going to do some quick maths to demonstrate. If we look at the worst-performing of all ad types (Display Ads) we can make some lowball estimates.
Display Ads have an average CTR of about 0.2%. This means that every 100 times an ad is seen it gets 0.2 clicks on average. To make it easier to understand – let’s multiple it by 10 to get 2 clicks from 1,000 ad views.

Display Ads have an average conversion rate of 0.57% meaning that for every 100 clicks, 0.57% of people on average convert. This time let’s multiply by 100 to make it make intuitive sense – so 10,000 clicks will get you 57 conversions.

(Not all conversions are sales, and this conversion rate will include post-view conversions, but for the point of this very broad strokes maths that’s fine)

Putting these together tells us that every time an ad is seen 5,000,000 times, it will result in 57 conversions (on average).

Best practice for Display Ads is to show them 3 times per 24 hours to each person. Assuming this is usually the case, that means those 5,000,000 ad impressions are actually shown to 1,666,667 people.

And now here is the kicker – we probably see around 5–10K ads per day each. Using the above maths that means we probably buy something because of an ad (on average) every 3-6 days.

“But I never clicks ads!”

That is probably true (to a point) so let’s factor that in. There was an old study (which unfortunately I can’t find) that said 90% of clicks on ads came from 1% of click-happy people.

So assuming that you are part of the 10% of people who don’t click very often, let’s use that maths to say that you actually only make a purchase through an ad 1/10th as often as mentioned – so every 30–60 days. Or every 1-2 months if you will.

Doesn’t that sound vaguely likey? That six to twelve times a year you will see an ad and it will interest you enough to maybe buy something? What if you include birthdays, Black Friday and Christmas?

Still no? Well, there’s probably something you’re not factoring in…

There are many types of ads

Ok here is the final point – when people think about ads, they tend to have a very narrow thought. You know on a conscious level that there are ads everywhere, but they are so diverse that the word “ads” probably instinctively brings up the idea of the one type of ad you see (and hate) the most.

But if you factor in all the types of ads out there, such as:

… well then it becomes a bit more fuzzy.

There are soooo many types of ads to click on, that the strong likelihood is that if you are on a site you trust, you may just give in sometimes.

(And please note, all of the above ad types have better click-through rates and conversion rates than display ads)

“OK! I click very occasionally, but I never buy something through them!”

Yeah, I get that a lot too. The thing is, a click doesn’t have to lead *directly* to a sale to count.

If you click an ad, look around, then come back a few days later to buy something then that click still technically have led to that sale. To anyone keeping track – it still counts.

Most people click on ads and make a purchase a few times a year.

It feels to most people that they don’t ever click on ads because it’s rare for them, and there are so many types of ads that they don’t intuitively count every click they make.

Statistically speaking though, you probably buy something after clicking on an ad around 6-12 times per year (on average).“

[This answer originally featured on Quora]

I’m adding to my negative keyword list and was adding competitors’ business names because I felt if somebody’s looking for a competitor, they want to do business with them.

Is this kind of traffic good to have, or are people likely to click my ad then jump over to the competitor?“

A: “Bidding on competing brand names can be expensive. As you said, the user’s intent is already to find your competitor so you have to override what the user actually wants. Going against the grain like this can be tough and takes great ads or deep pockets.

That’s not to say you should give up on every single search with a competitors name in it, only that it will cost comparatively more.

You can expect your competitor to be bidding on their own brand name – so the auction for those keywords will start at a higher price. And if you beat them to the top spot, your competitor will probably raise their brand bids to get it back meaning the price will go up further.

If they’ve trademarked their brand name it gets even harder as you won’t be able to use it in your ad (if you wanted to). They will likely have their brand name in their ad though, which means the relevance of their ads will be higher than yours. Lower relevance means you need higher bids to win.

More than that, if you start bidding on searches with their brand name in them then they will probably notice and start bidding on yours too. You’ll most likely win top impressions on your brand searches, but your costs will go up and your conversions will go down. To be fair, this may happen anyway.

I generally add competitors names as exact match in a dedicated negative keyword list. Then I judge each search query with competitors names in them individually based on conversion rate or ROAS (depending on the conversion). A long-tail keyword with obvious crossover probably isn’t going to start a bidding war, and if it’s performing well then no need to block it.

If the intent of a search query is obviously aimed at another brand and the conversion rate or ROAS is low though, then you might as well block it too.

To me the key is to not be needlessly aggressive about it. There is always going to be some competition, but if you lean into it too hard then you’re going to raise prices for yourself. If you back away too much though you’re going to leave conversions on the table for no reason.“