Hello, I’m back with the weirdest Christmas present you’ll get this year – the December edition of Online Advertising Answers. Enjoy!

This month I recommend some ad networks, demystify a really common by complicated calculation, and crunch the numbers on whether YouTube could afford to moderate videos before publishing them if they wanted to (spoiler – they totally could).

Get in touch with your digital marketing questions, and maybe you’ll see yourself (and my answer) featured here next month.

[Have a question about digital marketing? Ask me on Quora or email me at justin@theonlineadvertisingguide.com] 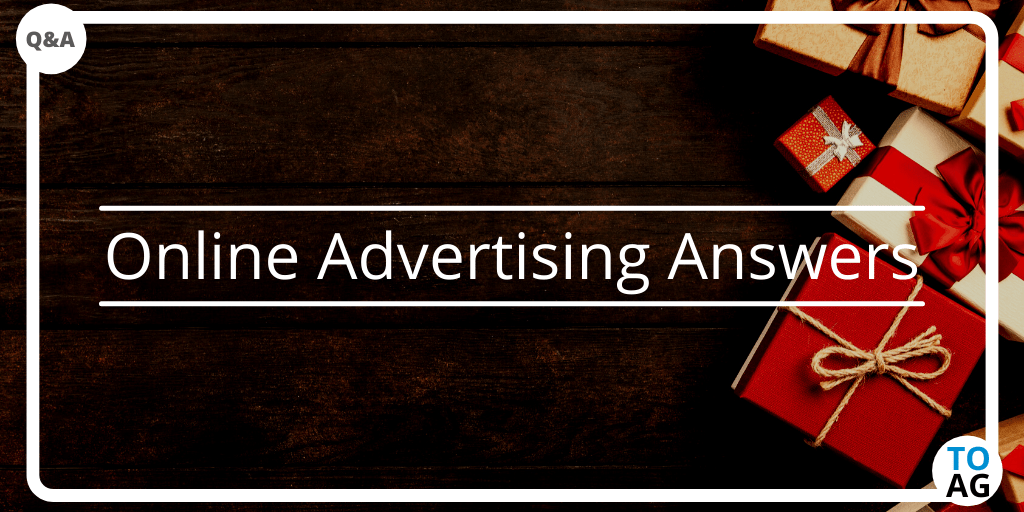 Q: “What are some good ad networks?“

A: “I run a site about online advertising, so I try to test out lots of different ad networks.

I currently use Monumetric, and they’re pretty great in terms of Page RPM. They take a fair amount of managing to get everything working how you want it though, and you have to have a WordPress site.

I tried Ezoic for a bit and I lost about 30% of my users so I left them. They were shocked by this, and said it was a technical problem – but it was never resolved. They do a thing where they inject ads into your site where their algorithm thinks is appropriate for each user, and I’m personally not a fan of giving up control like that. They do write some of the smartest stuff on the internet about display ads though so I suspect they are very good for some sites.

If/when I leave Monumetric I’m going to try SetupAd next as I’ve been chatting to them for a while and they know their stuff and seem like great people to work with.

If they don’t work out I’m going to join one of the ad networks listed on Acceptable Ads. ‘Acceptable Ads’ is a standard set of rules that says what ad types, sizes and placements can be used so as to not annoy users. The point is that if you follow the rules then ad blockers won’t block ads on your site. I think that it’s probably the future, and some big ad networks (such as Criteo) have signed up as have some big ad blockers.

I also tried UAM but their setup process was incredibly complicated and their help was non-existent. Both are big red flags! I don’t want to have to get tech support, but if I need it I want it to be available (that’s one of the things I like about Monumetric by the way).

There is also Ad Dragon who are a different type of ad network (something to do with the Blockchain). They were very friendly and helpful, but they just didn’t have many advertisers when I tried them. That was years ago though, so they’ve probably grown since then and might be worth a shot.

Then of course there is always AdSense who are low effort and reliable. If you’re just starting out they are definitely worth a look (until you hit maybe 50K page views per month – then go shopping for a new one).

There should be an honourable mention for media.net too. I personally found that they only gave me a page RPM of about 2/3rds what AdSense did, but they might work better in other niches. The reason why I would still recommend them is that they are a contextual ad network. So instead of dropping cookies on your users and profiling them etc, they just scan the page and then work out what advertising to show. If you don’t want to get bogged down in cookie compliance (which can get complicated and/or expensive), they can be a good way to go to avoid the whole deal.“

Q: “How do I calculate the month-on-month (MoM) increase percentage?“

A: “To calculate Month-on-Month percentage changes you take the previous month as a baseline and see what the change is from there.

This isn’t actually that useful though, as you can only use it in one specific context – “this month was 200% of last month”. It’s not an increase or a change, just a comparison.

To get the percentage change you need to remove last month from the equation – as if last months figure was your starting point.

If you’re doing this on a calculator I suggest you just -1 after you’ve divided the numbers. So: 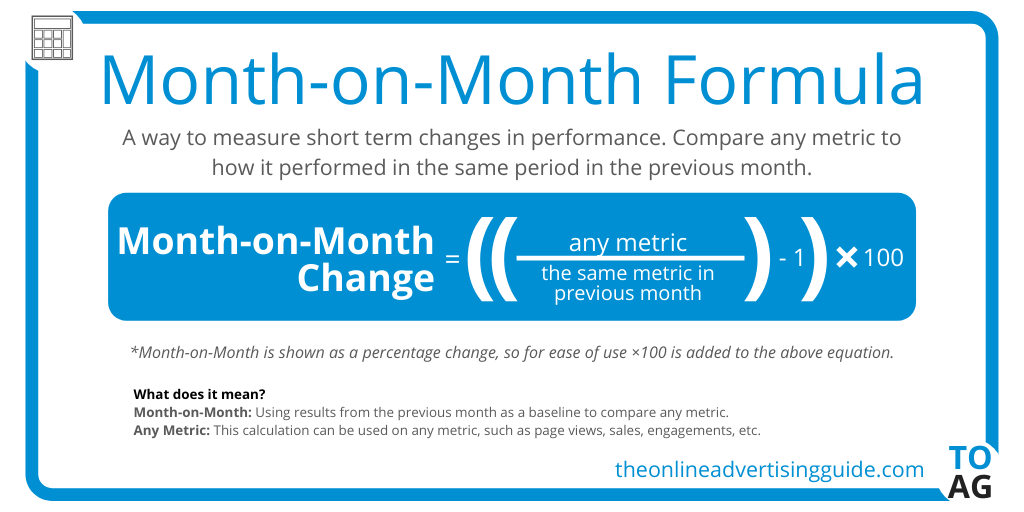 [Or you can use this Month-on-Month calculator]

This formula will give you your answer as a number – to turn it into a percentage multiply the whole thing by 100 (and add a % after it).

There are many other versions of this formula too, but they (should) all come up with the same answer, and this one is the easiest to use. The next most common one is:

It comes out the same, but it’s slightly more annoying to put into a calculator.

If you want to do it in excel or Google sheets, the formula is:

(You’ll have to change B2 and C2 as appropriate obviously)

This will turn the cell into a percentage straight away. You will probably have to fix the number of decimal places it shows though by pressing this button:

One final note – it seems obvious but it’s worth bringing up – months have different numbers of days. So if you compare a month with 31 days to one with 30 days, then there is going to be a bit of a discrepancy.

Because of this, some programs have a “last 30 days” option, or a “last 28 days” option so you can compare the same number of days at least.

Out of these two, “last 28 days” is much better as it covers 4 whole weeks. This means that you’ll get the same number of weekdays and weekends in your comparisons, and for many metrics, weekdays and weekends behave very differently. But then of course there is only one month per year that actually has 28 days – so if you start reporting on 28 day periods as a month you are always going to be underreporting by a little bit.

Whichever version of Month-on-Month you choose, just be aware of the limitations.“

[This answer originally featured on Quora]

YouTube earns about $22bn a year in revenue. Alphabet earns about $50bn in rev, of which about $10bn in profit. Imagining the profit ratio (5:1) sticks for YouTube (which it won’t, but it’s the best benchmark to guess the ballpark figure). So that $22bn revenue for YT is possibly $4.4bn profit.

So they could likely afford it.

Of course, it’s a business, so they will probably want all but likely problematic videos to be watched at double or triple speed by moderators. So it wouldn’t be unreasonable to cut those costs in half ($1.65bn) or to a third (and back to $1.1bn).

Which would mean they could definitely afford it.

More than that, about 14% of YouTube videos get no views. 30% get less than 100, 88% get less than 1000. Slowing down moderation times for unpopular or new channels would have no noticeable effect on users, and give Google the opportunity to lessen moderation costs again. They could make videos private while they are being moderated so you could still upload and share with friends instantly if that was the point.

Add to that the 40 million-ish videos that are currently removed each year via post-moderation which could instead be caught in pre-moderation. If you didn’t let bad videos go up in the first place, fewer people would attempt to upload them as there would be no point. This again would lessen the moderation-based financial burden.

Then of course there is the fact that many people upload videos to YouTube only to make them private and embed them on their own sites. These wouldn’t need the same level of moderation as they never go into the YouTube ecosphere. They could split off this product, or just add T&C’s about how they were the user’s problem (like now). To prevent trouble for themselves they could unbrand the player unless people submitted the video for moderation.

And finally, automatic moderation could make it easier still, by scooping off videos that could definitely not go live before a human mod takes a look. Duplicates, copyright infringement etc could be found with AI easily enough.

And, crucially, with a full moderation workforce available appeals could actually be implemented in a good way.

On the flip-side, if all videos were pre-moderated, advertisers would trust them more so their revenue would likely go up. And people would distrust them less so view times could also go up.

See you next year,