A while ago I was working on a charity account with a friend. Gloria worked on Facebook and Twitter (organic, not paid) while I took care of their AdWords Grant and analytics.

One day she randomly asked me:

“Which one has better stats: Social Media or AdWords?”

I think she was looking for a quick answer so she could mock one of us for being a loser.

I also think I took her question a bit too seriously. I sent her a long email breaking down the differences. Gloria sent me back a lot of facepalm gifs. And I mean a lot.

Anyway….this post is a variation of that email (with names changed to protect the unamused). 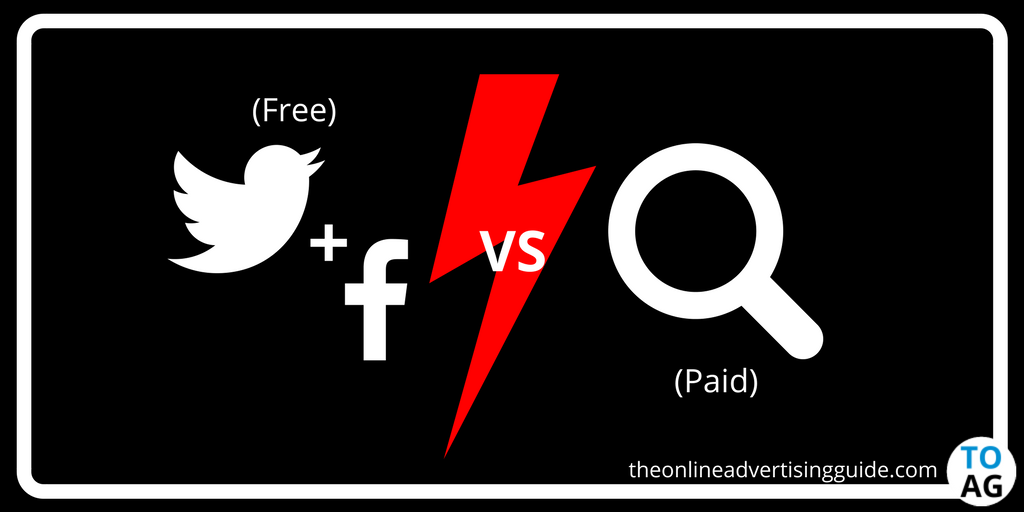 The real clash of the titans.

The thing is that although in a lot of ways the difference is completely obvious, SMM vs PPC is a weirdly hard question to answer.

At the end of the day however, both Social Media and AdWords need to have a positive ROI to be worthwhile. In most cases this means driving traffic, and this is where the difficulty in comparing them arises.

Both SMM and PPC are great at bringing people to a website, but the quantity and quality of the users that each bring in blurs the line of which is “the best”.

The Audiences Care About You In Entirely Different Ways

The biggest difference between Social Media and AdWords is the people you are talking to.

On (free) Social Media the people who read your posts are people who have already started a relationship with you. They have liked or followed your company, and said they want to hear your message. They like what you are saying in general, but aren’t necessarily interested in it right this minute.

So in other words:

In a nutshell, Social Media posts are often well received, but AdWords is more likely to get a user to take an immediate action.

This was my favourite facepalm gif in case you were wondering

Social Media knows no borders, but almost all AdWords campaigns are geographically targeted.

Social Media can be self-selecting in the geography of its audience (meaning a local charity will primarily have local followers). However any social media posts have the potential to spread around the world (and they often do). Every brand I have ever worked for has had followers from far away places, that were interesting but un-useful.

PPC campaigns will almost always have geo-targeting however. This is at least partially because Social Media is free, but with PPC every click needs to be paid for. Targeting the clicks that get the best ROI will always mean breaking down audiences by location on one level or another.

Even if you didn’t geo-target ads yourself, Google would prioritise local ads over yours in many cases anyway. This is because 80% of people want ads about things local to them. Google knows this and likes to give people what they want.

What this means for the traffic from each source:

Basically because of technical reasons, organic Social Media frequently sees a lot of wastage simply because of the location of users. AdWords can sidestep this issue. 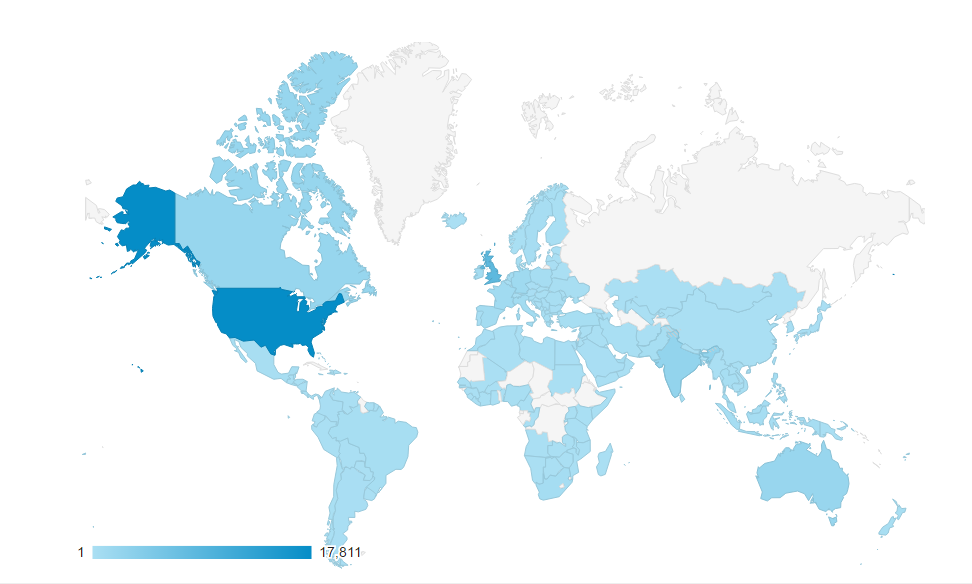 The dark patches mean the places that like you most. For the record – this client was not based in America.

Both Social Media and Search Ads have the potential to boost your traffic and build an audience. They strangely work in almost polar opposite ways to achieve this however.

Posting on social media can give you a short term boost in engagement or site traffic. Most of the time posts are intended to have the cumulative effect of building a community though. This is because more followers or likes means a larger potential audience, which will lead to more followers or likes. Your posts build a community, and that community hopefully boosts your traffic.

Conversely, an ad on Google will always give a boost to site traffic, as that is specifically what you are paying for. If you have crafted a good message on both the ad and page, and used a relevant keyword then perhaps the person who clicks the ad will come back for more later. Your ads boost traffic, and hopefully that traffic joins your community.

Social Media is about building up a long term user base, but AdWords only tries to get more people on your site today.

via GIPHY
Who am I kidding? This is my actual favourite facepalm gif.

Liking You vs Needing You

On Social Media your audience is likely interested in you. Unfortunately (especially with charities) they might not be interested in what you actually have to say.

For example, someone might follow a charity if they are doing an event for them (like running a marathon), but once the event is over that interest begins to wain. Out of loyalty this type of user keeps following the charity, but they will no longer read the charity’s posts.

This is a problem with all industries, which is why social media managers exist. Their specialist role is to keep audiences interested and engaged over the long term.

This odd company-to-person “friendship” can have huge benefits when done right.

AdWords ads need to keep audiences interested and engaged too but it’s not at all about friendship. AdWords targets keywords, not people, so the audience is forever changing. Instead of asking people to pay attention to you forever, you are just trying to get them to notice you one single time.

If someone is looking for something you provide, you just need to be in the right place at the right time. This can be achieved with some amount of retargeting, so that you only advertise to people who you are pretty certain want to hear your message.

However most of the time AdWords ads aren’t about hitting the same people over and over again, which means you don’t need to build a relationship. This holds true even for charities. Once AdWords has your proverbial foot is in the door, then it’s down to someone/something else to make the relationship work.

To put it another way – AdWords ads just get people in the door ready to hear your offering. Social Media presents the offer itself.

Yes I could have Googled the answer in less than a second, but I wrote this instead. Thanks for asking.

I can confirm however that they are real, and they illustrate the difference between PPC & Social Media quite nicely.

This is data about people driven to the site by each of these methods over the same time period. In this specific case, I was using an AdWords Grant for non-profits (of $10,000 per month), and Gloria was talking to an audience of about 5,000 followers on each platform.

$10k can buy a lot of clicks of course, but then again charity is often a very personal thing, and social media can hit an audience right in the feels.

And the winner is…

As you can see – AdWords and Social Media create totally different traffic in every way.

People who clicked on social media posts were clearly interested in what they found. They stayed quite a while, and generally went onto another page or more.

People who clicked on AdWords ads usually didn’t stay on the site for very long, and rarely went onto a second page. But boy oh boy were there a lot of them.

To be fair (to me) in many cases the information related to the paid search ads was right at the top of the landing page. This made a short session duration an entirely reasonable result. I was just trying to make it easier for people to access important information.

To be fair (to Gloria) the people who clicked on my AdWords ads were rarely joining the community though. With a 13 second average visit, it was unlikely we saw many of them ever again.

The difference between (paid) Search and (free) Social Media is startling.

The bosses of the charity we were working for wanted more people on the site, so they loved what I was doing with PPC. They wanted to increase the number of people who knew about what they were doing, and wanted to reach new audiences desperately. I gave them that.

The bosses of the charity didn’t however care about the amount of Social Media followers they had per se, so they found my friends role more confusing. They wanted supporters of the charity to be kept engaged however and she was crushing that. Getting new supporters is a challenge, but keeping supporters interested for the long run is more so. Gloria gave them that.

Basically: AdWords can speak to lots of people who you wouldn’t otherwise reach (and hopefully find a few great users along the way). Social Media drives far fewer people to your site generally, but those people are much more valuable.

Ok fine, this is my real favourite. Panda’s are just funny ok?