So you have an idea and are going to make your own website. Great! You’re at the start of an exciting project and I wish you the best. While most people recommend having more than one founder for any startup, that is not always how things work out in real life. If you are a solo startup founder things are going to be tough – but not impossible.

I have worked on, and for, a lot of great startups over the years. They have covered every industry I can think of, and the key to all of them has not been how many founders there are, but the originator of the project – the original founder (ie – you).

While some of these projects have thrived, the ones which failed had a lot more in common than you might think. The lessons I learned from each failure helped me on the next project to avoid pitfalls, and to help steer the founder in the right direction.

These seven simple lessons are now my golden rules for whenever I work on something new. If you are starting a new site, read these and internalise them before you get going. I promise they will help. 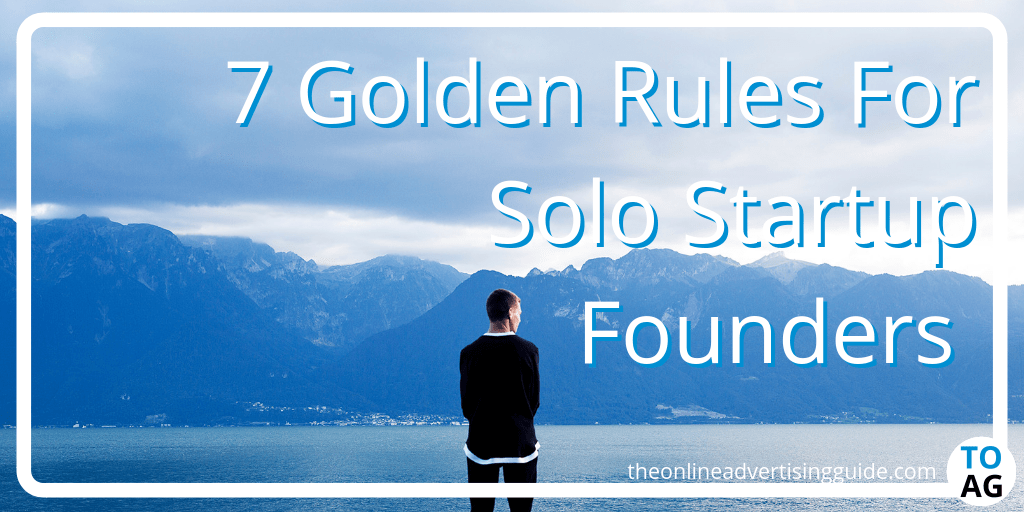 1) This is your project so you have to drive it

This is the most important thing. Regardless of who else gets involved, no-one will ever care about your big idea as much as you. You have to be the leader and keep pushing it forward. As a solo startup founder, you’ve taken a lot on – know that and own it.

Delegate work to others if you can, but you’re the key to everything. The effort you put in will have more more effect than that of anyone else you are working with. If you get other people to help you, don’t be surprised if they are not as committed as you. They probably have their own dream startup that they are planning for the future.

Web work can be annoying and time consuming. If people are doing work just as a favour to you, then they always have the option to flake on you. You should either get people fully on board so it’s their project too, or you should pay them.

If you ask someone to do something for no pay, then they have the power. If they do a bad job and you complain about shoddy work, they can always take the nuclear option and say “That’s the last time I do you a favour!” – and they’ll have the moral high ground. It was a favour, and they don’t have to do it.

To get people to do good and timely work as a favour, you have to ‘pay’ them in excess politeness and begging, and you still might not get a good result.

If you pay someone however, and they do shoddy work, you can always take the nuclear option and say “I’m not paying for this” – and have the moral high ground. Paying someone means you can expect more, and get more.

Of course among friends and family (or whoever is doing you the favour) you don’t want anyone to take the nuclear option. That’s why you shouldn’t rely on favours, and why you should always make a contract.

3) Nail down contracts from the outset

You should clearly define what it is you want from people (hours or work-wise) and what they get from doing it. You can find standard contracts online, but the absolute minimum you should do is have an email chain where you have said what you want, what you will pay to have them do it, and they have agreed to it.

Note: An email contract like this is only ok for absolutely tiny bits of work. If you are promising more than a specific exchange of money for a specific short term set of work, you need a proper contract.

Without defining exactly what you are paying for, people are basically just doing you favours. The same goes if you pay in shares in the startup rather than money. Unless they are totally on board with your project, those shares are worthless for the foreseeable future and they are essentially doing you a favour.

Also – if you don’t define what they get for their help, then people are more able to sue you for more money if your project gets mega-successful. You may not think this will ever happen to you, but a large part of contract law is settling disputes between friends and family who thought a handshake was enough of a contract.

If you are building a big or complicated website, then you will probably need to hire web developers. The problem with this is oversight.

You generally can’t really tell what developers are doing on the day-to-day, and they are sometimes doing much less than they are telling you. This is because code can often only be read by the person writing it. On top of this, contracted web developers often won’t release the code to the client until the project is done.

To get around this, the current trend is “iterative development”. This means moving forward by only making and testing small changes. This means, for example, instead of telling your developers to build a section of your site, you tell them to build a page by a certain date, and then get back to you. You then review and approve this small iteration, and move onto the next one.

By doing iterative development you can at once be much more in control of a project, and also much more able to leave developers to do their work.

This project of yours will take a long time and a lot of work to make a lot of money. If it doesn’t go your way right from the outset don’t get down about it (don’t give up at the first hurdle as my momma says).

There will be lots of hurdles. Hundreds, thousands, millions perhaps. Don’t make overestimating your success one of them. It can be a real downer to miss a target you have set yourself. When you are driving a project, your mood is a big asset and so making yourself depressed or desperate is a bad move. If you are feeling positive, your project will likely move forward apace. If you are feeling depressed and desperate you will probably make bad decisions.

Give yourself reasonable goals. Understand that you won’t always hit them. Work hard regardless.

6) Be careful about investing your own money

Either set a limit on how much you are going to invest, or find investors. Whatever you do don’t just throw all your cash at it without any limits set. You should also keep accounts of hours worked and money spent. The hours you work on count as an investment, the same as money.

Keep in mind it can take years for a project to actually earn you any reasonable amount of money. Also keep in mind that most startups fail and never earn anything. If investing money helps your project move forward, great, but don’t be a bottomless money pit for it. Keep your personal finances separate, and keep an eye on your ROI (including the hours you personally work – if you have another job, price your hours at that wage).

Work out the ROI of your project with our ROI Calculator >

7) Don’t try and reinvent the wheel

You are making a specific project work, so focus on that. Don’t try and come up with some new fancy business model or employment contracts to make your startup run just how you like it, unless you are an expert in that sort of thing. Adding unnecessary layers of complexity to your project is a bad idea, as they will just lead to a whole extra world of confusion.

Businesses work how they do for a reason. You only have so much time and effort to expend, and your project will need all of it. Focus you efforts on what you need to do to make your project a success, not on changing the world.

This is the key to everything in a lot of ways. If something works, do it more. If something doesn’t work, stop doing it. If you don’t know how to do something, just do it the way everyone else does it (for now at least).

You need to focus your efforts on this one project until it works. When you’ve done that, maybe revisit your plans for a new revolutionary business model. Until then, let other people revolutionise the things not directly related to your startups success.