AdWords is arguably the best form of digital marketing for consumers (except maybe SEO).

Unlike other forms of advertising, AdWords is trying to show people what they want to see, when they want to see it. It’s not monetising your eyeballs and distracting you like display advertising, or taking advantage of a brief peak in your interest like email marketing.

What it is doing, is giving you extra search results for the thing you are actually searching for.

The algorithms that decide what ad you get shown is working off the idea that the better and more relevant the ad is, the more likely you are to click.

And the thing is – you want to click ads relevant to your search too. It’s not like you search for things so that you don’t find what you are looking for is it? (Is it?)

While we’ve been repeatedly assured that the Google’s AdWords and Search departments are kept strictly separate, AdWords goal is the same as the Search Engines goal – to show people the best result.

This is what makes AdWords so special and unique in the world of advertising. For once advertisers goals are aligned with consumers goals, and that basically never happens.

Sadly though, there is some psychological trickery that expert advertisers use to perform well on AdWords, and they will probably make you mad when you find out about them.

Not mad at advertisers mind you, but mad at yourself (and everyone else) for being so easily trickable. 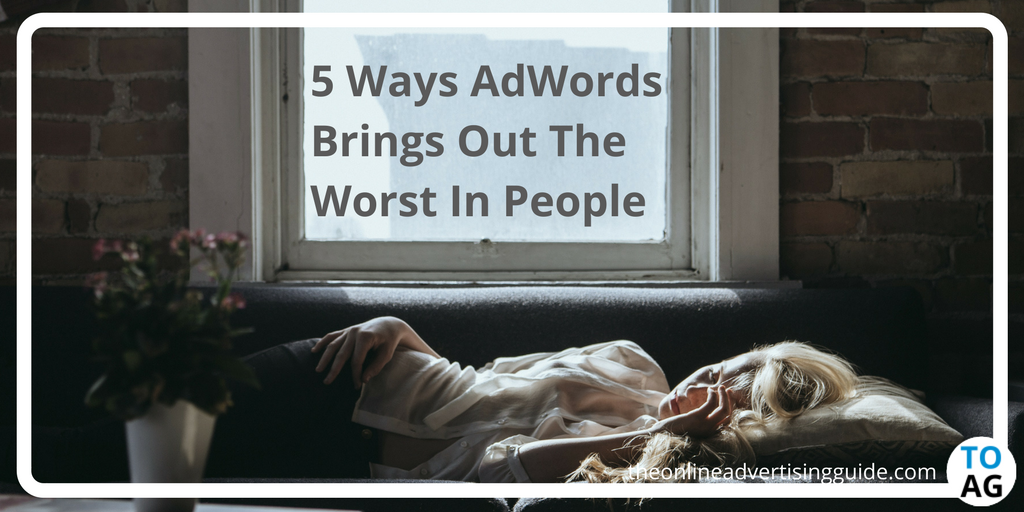 1. If we see the same thing twice in a row, the second time we’ll be impressed for some reason.

In a feat of mathematical trickery that makes no sense, 1 ad + 1 search result = 3 clicks. Okay well not quite that, but if you place an ad on your best performing search terms, somehow the total clicks you get are more than you would get if either the ad or search result happened alone.

That’s right you heard me. Putting the same link on a search results page twice in a row, makes people click it more often.

This makes no sense.

You would expect that if you get the #1 search result position in Google then people are already clicking on your page as much as possible. It’s the number 1 spot afterall – you get to number one by people being most interested in what you have to say. On top of that, most people click the number one result.

So adding an ad to that mix will only cannibalise your results right? If they weren’t going to click on your glorious number one result before, they’re not going to do it now are they?

And the same goes for advertising on spots where your site isn’t ranking at all but your ads are doing great. If your page somehow creeps onto the same SERP organically, it won’t matter will it? Your ad already has it covered!

Wrong again. Somehow seeing an ad and then a search result for the same thing triggers the double take in all of us. You ignore the ad, but then see the search result and think, “sure, if you insist”.

It’s the digital equivalent of someone offering you gum, and you turning it down, but when they air-poke it towards you for the second time, you take it anyway out of politeness.

But this time you’re being polite to letters on a screen, like some big dummy. Do you apologise when you close your fridge door too hard too? No? Then what the actual click is happening?

Part of what is happening above is that on Google we are easily impressed by size.

Simply by taking up more space on your screen, an advertisement does better. Size matters, especially when it comes to clicks.

This may make some sense (to me at least) , as when it comes to fine art I’m a sucker for a giganto canvas (I personally think that Guernica and The Deluge are overwhelmingly amazing but the Mona Lisa could probably do with a little upscaling).

Unlike with my fav paint splashes though, we’re not talking about more meters of amazing, we’re talking about (a few) more pixels of text here. We’re not leaning back to take in some grand glorious masterpiece, we’re scrolling for a fraction of a second longer.

Regardless – bigger still means better. In AdWords advertisers can increase the size of ads by adding Ad Extensions, and boy oh boy do they work. Sitelinks are among the largest ad extensions, and Google wants everyone to use them as they are so gosh darn effective.

And in fact they go the other way with it too – if your ad has a good enough ad rank to get into one of the top couple spots then Google will show more of your ad extensions to make your ads even more clickable. More space equals more clicks and that’s all there is to it.

Don’t just listen to me, The Goog tells you all about it on their own help page here (which I screenshotted below for some reason):

3. We Listen To People Who Talk Loudly On The Internet

Google does allow sentence case though (AKA Talking Loudly). In fact I would go so far as to say it encourages sentence case (Which is When You Capitalise Every Main Word).

This is again, because it is a tactic that encourages clicks on AdWords ads. And why does it encourage more clicks?

Because Title Case Looks Bigger On The Screen.

Do you feel dumb and/or mad yet? Don’t worry, you can feel both.

♬The #1 Ranked Result For AdWords Guide Do It. Bees Do It (Probably?). Even Educated Fleas Do It. Let’s Do It. Let’s…Title Case.♬
Note: There are no educated fleas.

4. We’re easily enticed by even the slightest difference!

We’re deep enough into the 21st century and internetting in general that most people see @ signs every single day.*

It’s also not the stuffy past where exclamation marks were reserved only for golf sales and the end of jokes either.

And as you’re reading about digital marketing, I can safely assume that you are not three years old and weirdly in love with numbers and disturbed by ampersands.

Despite all these assumptions about non-alphabet characters being definitely true, we all still get click happy whenever we see any of these things.

Put an exclamation mark in an ad, and the CTR gets a boost. This goes double for other odd characters, and triple for numbers!* Literally any non-alphabet characters in your ads will get people a clicking.

And why? Because we’re simple dumb schmucks, that’s why, and we like pretty things even when they’re not pretty (and in text ads).

It’s like they’re squirrels and we’re dogs. We just can’t help it.

It’s because of this that Google has put in limits on how many of each you can use. Because if they didn’t, then just like vajazzling it will IMMEDIATELY get out of hand.

*You actually can’t use @ signs in AdWords ads.
**This is not the hierarchy, just put odd characters in and reap the rewards. Don’t worry your pretty little head about the maths.

This is perhaps the most angering one, so brace yourself.

There is a direct correlation between how often people log in to their AdWords accounts and how well that account does.

Think about that for a second.

To do better, an advertiser just has to log in more often, and that is basically all. Even the smallest effort is rewarded because we’re so easily led.

Google makes it crazy easy for advertisers to optimise their AdWords accounts, what with the graphs and stats just there for the looking at. There’s even a tab called Recommendations which straight up tells you what to do to improve your account.

If you’re using AdWords, press this button for treats

And yet advertisers often just don’t log in. People ‘set it and forget it’ ridiculously often. In fact for Google’s Ad Grant programme, where it gives charities free money to spend on AdWords, they’ve had to institute a rule to get charities to log in fortnightly minimum because abandoning AdWords accounts happens so often.

Not that I blame charities, they have other things on their mind (such as charity), but I do blame everyone else. Even my elderly relatives who get scammed pretty frequently by internet nonsense, still wouldn’t be happy with the claim that just by trying, an advertiser can make them click on something. But they could.

We all could, and that is in fact the point – AdWords is easy. A little too easy in fact.

If an advertiser puts the time and effort into AdWords, they will be rewarded. If they try to do better, they will do better (this is of course on average – some people are bad at things).

The reason why this is so angering is that the improvements people are making to their ads are generally tiny and abstract. A different word here, a different phrase there and kablamo, suddenly we see an ad for something we used to hate and we’re interested.

We shouldn’t be that easily bamboozled, but we are.

What advertisers are advertising is generally not changing at all either, but even if it was we couldn’t see that in Google. There’s no tangible reason we could articulate to our friends as to why we changed our minds about a product. No argument we could make about why we had to buy that thing now (but not before).

All we see is the ad, and it’s a meaningless little lump of text just like all the others, but somehow it now works.

The fact that effort = reward says to me that eventually, we’ll all get worn down. Don’t want a raincoat? Well you will one day. Can’t stand rocking chairs? Just wait until you see the new wording on their AdWords ad!

[Note: Fiddling too much with your AdWords account can be a problem too – I would generally recommend making a change to an ad group and then waiting a week or two so you can see what effect that change really had. However if you’re not logging in every weekday to check up on your ads, you’re not taking it seriously enough.]

Make ads bigger, we’ll click more. Put in an exclamation mark and we’ll pay more attention! Do basically anything, and performance improves. It’s nice for AdWordsers, but when you really think about it, it’s pretty damning for humanity.

So let’s not think about it. Forget you read this blog. Go outside and eat an ice-cream. Do anything except consider how easily impressed everyone you know is by an exclamation mark. You’ll feel better for it.

Also try not to remember the fact that you react to ads basically the same as everyone else. Only a real jerk would bring that up at this juncture.