Skip to content
Home » Early Train Blog » 4 Types of Digital Marketer That You’re Probably Not! (But Could Be)

I was recently interviewed by a small website, and in their outreach email they referred to me as a Digital Marketing Guru. High praise I thought!

I also thought – what a ridiculous moniker to apply to me. Having seen way too many people on Twitter refer to themselves with an unearned grandiose title, I chafe against the idea of such things. Like many people, the idea of a Digital Marketing Guru, or Wizard, or Kingpin, or Master, or Lord and Saviour, makes me feel… bad. Bad for mankind at belittling these words. Bad for the individuals who use them without earning them. Bad for digital marketing as a whole that this has become so commonplace.

I know this isn’t the most pressing of digital marketing concerns to address, especially when I have the UK’s implementation of PECR to worry about. But it’s the end of Summer, and I’m allowing myself this flight of fancy. Just roll with it ok? 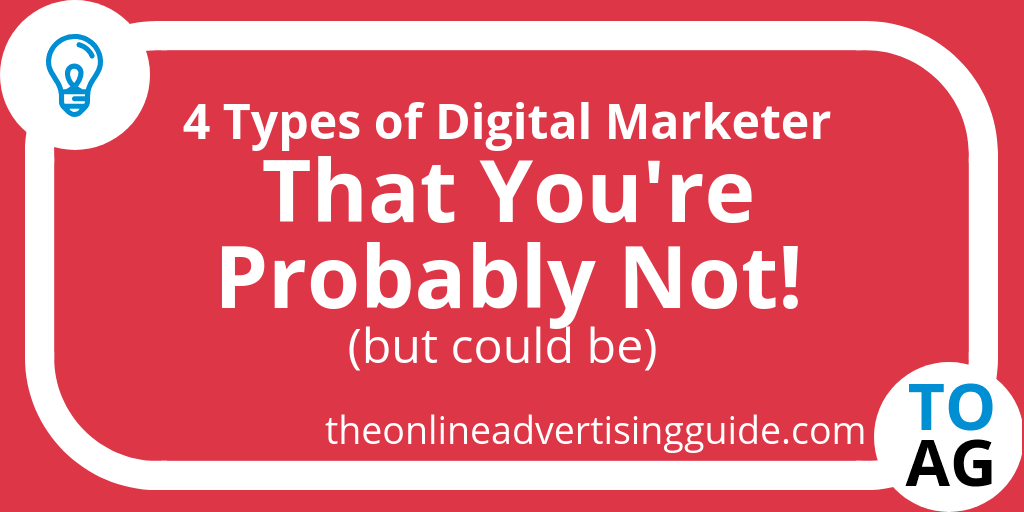 Let’s start with the title that kicked this off for me (and also, frankly, what I most aspire to be). A Guru is traditionally a Hindu spiritual teacher, however, the word is also used to simply mean an influential teacher or popular expert.

So breaking this down, the key components you would need to be are:

I’m leaving out Hindu simply because I don’t think this is the place to discuss religious affiliation.

Anyway, taking these five traits you can begin to see what a Digital Marketing Guru would be like. They would need lots of social media followers (100K+ would be my benchmark) and good engagement rates to be both influential and popular. They would need to really know their digital marketing stuff and be helpful to others in order to count as a teacher and an expert.

If you take spiritual to mean “tending to the human spirit” then within digital marketing it could refer to White Hat SEOs, honest marketers, and people who discuss the philosophy of marketing (eg “if you build it, they will come” types ).

Together these build up a picture of a wonderful digital marketer: popular, engaging, helpful, honest, and thoughtful. If you’re not these things then don’t call yourself a Digital Marketing Guru. If you are, then amazing! Well done!

Real-life example: Me (I wish). Seriously though: Rand Fishkin – Originator of Whiteboard Friday

A Maven is defined as being an expert or connoisseur (with a connoisseur being defined as an expert judge in matters of taste). The picture of what a Digital Marketing Maven is therefore pretty easy to build up.

NB: I know you technically don’t have to be successful to be a connoisseur of something, but if you’re an expert and a connoisseur, the likelihood is that you’ve done something great with those skills. So I’m talking up the connoisseur part of this, rather than accepting that your friend Jimmy is a crisp connoisseur because he eats so many Wotsits.

Together this implies a top-level digital marketer – probably someone with Director (or higher) in their job title. They would likely be a decision-maker at the top of a successful digital marketing team – probably a top agency or in a FTSE 100 company.

Someone could also fit the bill by being a judge for a marketing award, or someone who writes about digital marketing for a magazine. They would also still need to be an expert digital marketer themselves on top of this to qualify as a Maven, however.

So a Digital Marketing Maven should be a high-level digital marketer who is a widely respected judge of whether digital marketing campaigns are good or not. Noobs need not apply basically.

A Ninja is someone who does ninjitsu, which is a martial art mainly known for stealth and for versatility with weapons. In terms of being a digital marketing Ninja, this has some easily translatable implications.

Firstly, just change the word ‘weapons’ to ‘channels’ or ‘tools’ and immediately the type of digital marketer who would qualify becomes clearer. A multi-channel or omnichannel digital marketer could be considered a Ninja, as could someone who sees opportunities for marketing where others don’t. That is IF their marketing was stealthy too.

And yes – Digital Marketing can be stealthy in its own way. While I’m personally against tricking people with advertising, there are lots of ways that online advertising can sneak a message into people’s brains.

Branding (as opposed to performance) based advertising is a way to make people like your company more without asking anything of them. It’s not directly stealthy per se, but could be considered a sneak attack on people’s minds! Similarly, gamification can offer companies ways to make ads which don’t feel like ads. Dorito’s Dash on the Xbox was a great example of this.

You could also technically include most Black Hat SEO techniques as being stealthy and using a variety of digital marketing weapons. I wouldn’t generally include this as a positive though, simply because in the long run Black Hat techniques almost always backfire.

On that level Digital PR, in general, could also be considered stealthy, especially if it’s below the line. This would include publishing articles, videos, memes, social media posts, etc to promote viewpoints sympathetic to a brand or individual. I still assume this why bacon (delicious as it is) was commonly available at a ridiculous 3-for-the-price-of-1 level pre-internet, and now is so beloved that you can literally subscribe to a bacon delivery company.

These last two (Black Hat SEO, and BTL PR) aren’t things I approve of by the way. That is kind of the point though. While Ninjas in movies might be cool, in real life they would kind of be dicks – at least half the time. This goes for Digital Marketing Ninjas too.

To summarise – a digital marketing Ninja should be someone who uses any channel, tool, or opportunity at their disposal to make their marketing work. Their digital marketing should achieve its goals without people noticing (at least while it’s happening).

Real-life example: Jason Zada – the creator of the terrifying & eye-opening Take This Lollipop campaign (which has sadly now been shut down).

A Wizard is someone who does magic. End of story. So a Digital Marketing Wizard should be someone who can create digital marketing that seems like magic. This is either in the results or in the execution of a campaign.

So, for example, a Facebook ad where part of the ad appears to come out of the screen would be a simple version of this.

It’s more impressive when you actually see it on Facebook

My preference, however, would be someone who creates something out of nothing. A digital marketer who is given a poorly performing brand and no budget but who somehow creates results that astound.

These types of digital marketer are likely often overlooked. I would assume that many digital marketers who are truly pulling off miracles of ROI are low level and underappreciated (which is why they have so little budget in the first place). You might assume that these types of campaigns would win awards, but a marketer who turned $100 budget into $1000 profit is unlikely to get as much attention as someone who turned $1million into $1.5million.

Razzmatazz requires scale to be appreciated after all. This is possibly why magicians replaced Wizards over time – showmanship.

So to be truly counted as a Digital Marketing Wizard, you need to be creating something truly special and surprising. If you simply claim to be pulling great results out of thin air (but don’t actually manage it) – you’re probably just a magician rather than a Wizard.

If you want to re-live the above in a more concise way, have at it: 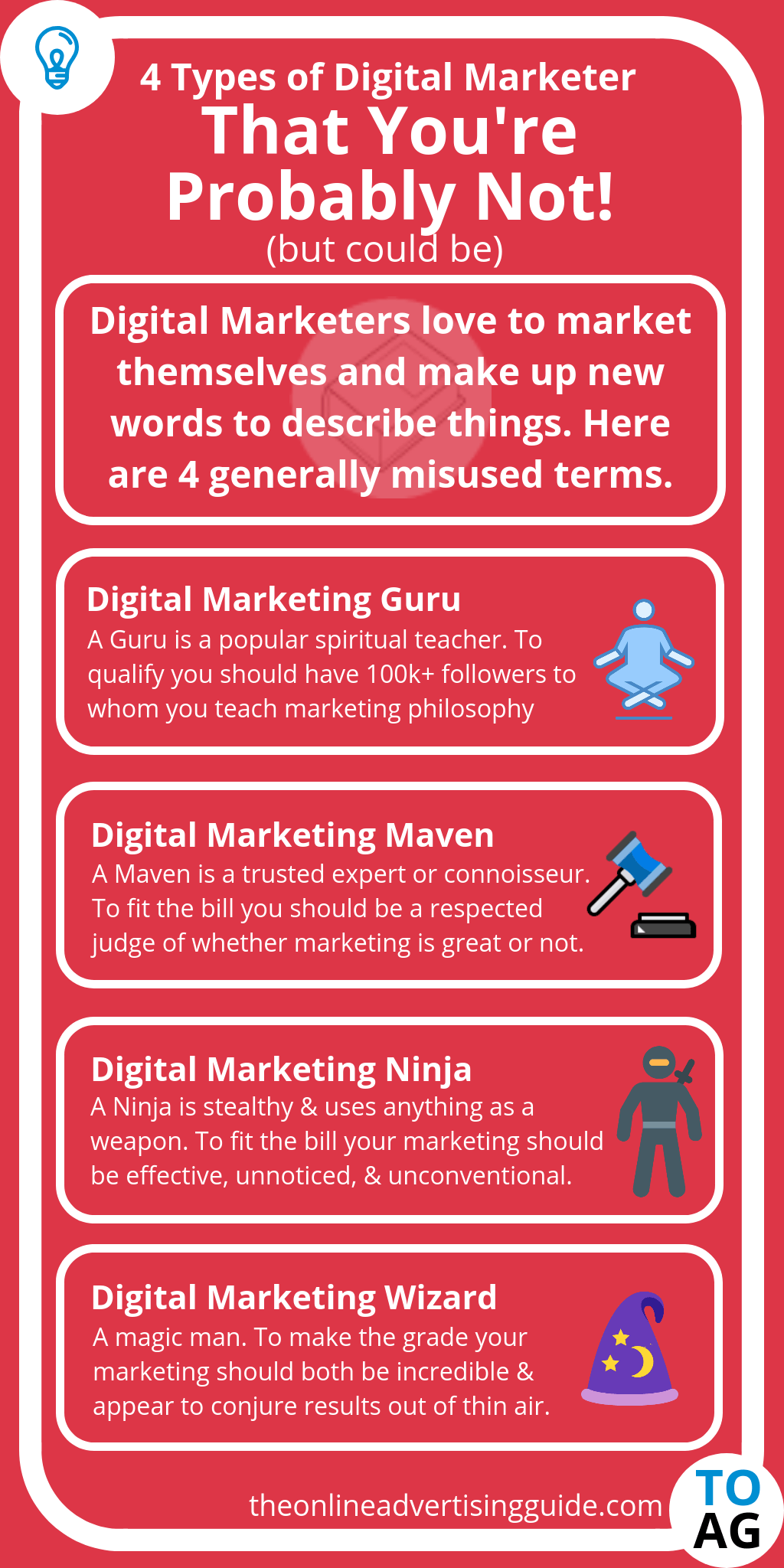