When should I be selling ads on a CPE basis?

The simple answer is: when you have spare space on your site and it’s a good advertiser.

A CPE campaign is a confusing beast – on the one hand, you are being paid whenever a user has anything to do with an ad that seems like easy money. On the other hand, they are a nightmare to optimise towards so it is very much a spray and pray situation.

How do I run a CPE campaign?

The first thing you need to do is be absolutely clear with the advertiser which engagements are being paid for. You really want a definitive list so that there is no confusion – as some advertisers will pay for everything and some will pay for only a few things. Either is ok, to be honest, the problem you are trying to avoid is them moving the goalposts later on.

The second thing you need to do is make sure regular reports are sent over by the advertiser so you can be sure of how you are doing. If there are multiple ads in the campaign, they should be broken down by each ad, and ideally by day too. They should also list every interaction undertaken separately just so there is no confusion.

After that, you should set it up like a CPA campaign, but essentially run it like a CPC campaign. You can try and get conversion pixels in place so you can track the engagements in your system, but as they aren’t designed for that purpose it is unlikely they will work properly. 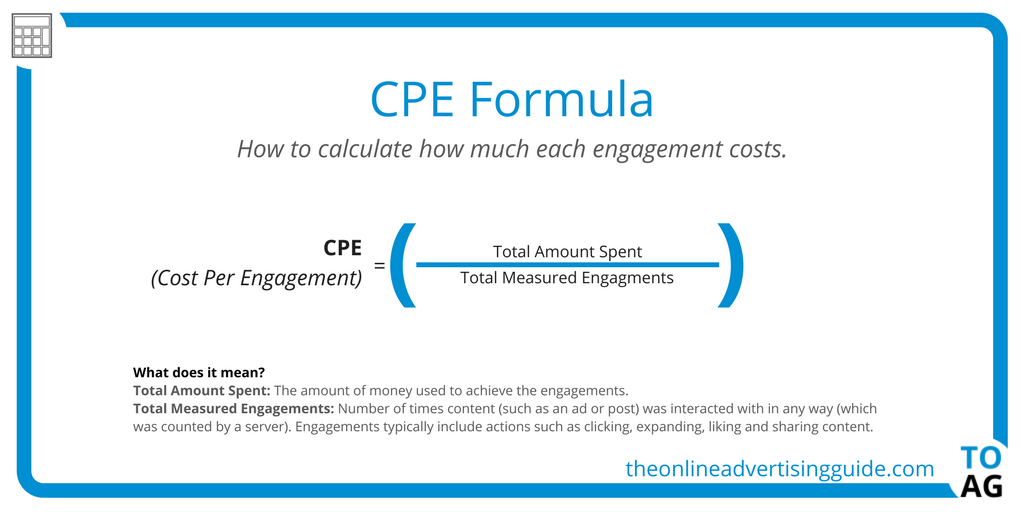 As stated above, running a CPE campaign like a CPC campaign makes the most sense. Aim for getting clicks, and that will at least imply users are interested but set it up like a CPA campaign so that it can get unlimited impressions on the go.

Check the reports you get sent from the advertiser and try and optimise towards them. The easiest way is by ad unit – if one is doing especially bad then use it less (assuming the deal allows you to move around like this).

You can also do some basic optimising towards CTR, and then check the reports to see if there was an improvement from it. It’s important to keep the data clean – for example: if you move impressions around on Jan 25th, then don’t make any changes on Jan 26th. Then check the reports and compare Jan 26th to Jan 24th – Jan 25th is a mix of two different sets of impressions, so you can’t use it to compare anything.

You can work out the engagement rate to optimise towards if you want to be efficient with your impressions. This would be the number of engagements divided by the number of impressions served (multiplied by 100 to make it a percentage).

What CPE price should I accept?

Depending on what engagements are being paid for, you can get a very high or very low CPE price offered to you, and either one has the potential to make you loads of easy money or none at all.

If the engagement you are being paid for is something difficult, like signing up to a service then expect a lot per engagement. If it’s medium difficulty, like expanding an ad or playing a video in an ad, then expect medium cash. If it’s easy and includes lots of engagements (like pausing a video), then expect little money.

Like all oddly priced campaign structures, the only real way to know if a CPE campaign is worth it is to run it for a while then work out the eCPM. If the eCPM is equal to or better than what you are receiving elsewhere then keep it going and accept repeat bookings.